A Mistake From Start to Finish - Louis Napoleon

Louis Napoleon, as President and as Emperor of France from December 1848 to September 1870 is viewed by history as an adventurer; he was the first French leader since Napoleon I to fight against all members of the former Holy Alliance: Russia (1854-56), Austria (1859) and Prussia (1870). in Italy, however, Napoleon III made his most daring efforts to revise the 1815 settlement. There were many reasons for this: his past associations with the nationalist conspiratorial movement, the Carbonari; his hatred of the Austrians who dominated Northern Italy as the chief obstacle to any revision of the Vienna settlement; the legacy of his uncle who began his great campaigns in Italy; and the fact that any revision on the Rhine would reawaken the Quadruple Alliance against France whereas in Italy Napoleon could hope to isolate Austria.

Don't use plagiarized sources. Get your custom essay on
“ A Mistake From Start to Finish – Louis Napoleon ”
Get custom paper
NEW! smart matching with writer

Not all of his ventures were successful however, and some were very costly, so to assess whether the Italian policy was a mistake the achievements should be balanced against their price.

When Louis Napoleon came to power in December 1848 the revolts in Italy were already underway and in November the Pope had fled to Gaeta leaving Mazzini in control of the new Roman Republic. Had Napoleon taken power in February he may have been able to have approached the situation differently, since the Austrians were tied up with problems at home and elsewhere in the Empire. But Napoleon’s Italian policy did not begin with the landing of the expeditionary force at Civitavecchia in April 1849. He attempted to bring the matter before a Congress and tried to pass responsibility for the intervention to the Sardinians.

But the other powers and the Pope would not accept this. Britain saw the matter, in the manner of Castlereagh’s State Paper, as “questions of internal governments”. Austria had to protect her interests and the Pope, since it was Italian Nationalists who had usurped him, had no intention of entering into the protection of other Italians who had proved equally rebellious in recent months.

Napoleon had to act. Although by overthrowing the republic he was undermining his Liberal, pro-Italian background, the President’s power basis was a majority of conservative clericals who desired to see the Pope restored. Napoleon’s hatred of Austria and wish to revise the 1815 settlement determined that it should be France, not Vienna, who should fulfill this role. Although Napoleon was many times to regret intervening in Rome which became “a trap from which he could not escape” since French Catholic opinion was to force Napoleon to keep his garrison there longer than he wished, the pressures upon him in the winter of 1848-9 forced him to do what was, at the time, in France’s and his own political interests.

Unlike 1848-9, in 1858 Napoleon was not forced by international crises to become involved in Italy. The Pact of Plombiï¿½res (July 1858) with Sardinia was a determined attempt to upset the balance of 1815 in France’s favour. Although the revision of 1815 was the aim of all subsequent French governments Napoleon found that he did not have the support of his Foreign Minister, Walewski, in this venture. However, if the balance was to be upset then Napoleon was not mistaken in choosing Italy as the location. In Sardinia he had a willing accomplice eager to expand in the peninsula. An expedition on the Northern frontier into Belgium would involve greater risk of war with Britain and Prussia. Furthermore, Napoleon’s vision of an Italian confederation under Papal Presidency had much to commend it. Since France would not be governing Italy the other powers, notably Britain, should be pacified. France could, however, have influence in the confederation: in Sardinia through the marriage between his cousin Jerome and Princess Clotilde. In Central Italy where Jerome would govern; in the Papal States where the French garrison remained to protect the Pope; and hopefully in Naples where a restoration of the Murat dynasty (Napoleon’s cousin) might be achieved. French clerical opinion would be satisfied by the Pope’s presidency.

However the Emperor was mistaken his estimation of Sardinia’s ambition, the strength of Italian Nationalism and of the attitudes of the other powers. These misjudgements, whilst France still won an important victory over Austria in 1859, meant that Napoleon achieved few of his objectives. In diplomatic circles he only gained the support of Russia in his attempts to isolate Austria. Russia, just as France hated the Vienna settlement, wanted revision of the 1856 Treaty Of Paris, especially the Black Sea neutralisation clauses, which whilst not included in the Franco-Russian treaty of March 3rd 1859, Napoleon was prepared to abrogate in principle, despite insisting on their inclusion in 1856. All that was achieved from Russia, however, was “benevolent neutrality”.

The Tory government in Britain was pro-Germanic in outlook (through the preference of the queen). But even the Whig opposition (which better represented public opinion) did not translate pro-Italian sympathy into pro-French support. Palmerston had always mistrusted the French and whilst the proposed creation of a strong Italian state from Piedmont to Venetia would satisfy Whig ambitions to remove Austria from Italy, there was suspicion that France intended to use the new state as a French puppet. What the British did offer was mediation that would remove any casus belli and possibly wreck the entire plan. Furthermore the Prussians were not, as Napoleon may have hoped, yet so determined to overtake Austria predominance in Germany that they were prepared to conspire against them in Italy.

Napoleon did things in the wrong order. He should have made diplomatic gestures to the other great powers to see if the plan to isolate Austria was feasible before committing himself to Sardinia’s cause. As soon as Cavour knew that he had French promises to assist him in expanding his country, Sardinia were desperate for the war to begin and frowned upon any act of caution by the French. As soon as Austria’s aggressive folly brought the opportunity in April 1859, Napoleon’s hands were tied and he would have to see through his commitments without any guarantees of how Prussia would react.

Napoleon further misjudged the Sardinians’ military strength. The force provided by Piedmont did not match that promised at Plombiï¿½res and the brunt of the fighting at the two battles Magenta (June 4) and Solferino (June 24) was borne by the French. Although France won both battles, these were bloody and indecisive. The Austrians retreated to the Quadrilateral Fortresses where they could have remained for a long siege. With the Prussian mobilisation (June 24) Napoleon’s decision to negotiate with Austria in July, was wise since to prevent war on the Rhine it would be preferable to have “peace at almost any price”.

At Villafranca, 11 July 1859, Napoleon once more angered Italian nationalists. He had abandoned their cause before freeing them from Austrian control “from the Alps to the Adriatic”. Austria still had Venetia, and this was to obsess Napoleon until it was annexed to the Kingdom of Italy in 1866. Meanwhile, France had gained nothing. French public opinion was opposed to the war that was widely considered expensive and worthless and Napoleon could not have carried his campaign further since he was freely recognised that “I am the master of everything in France except public opinion”. The revolutions in central Italy were unforeseen and destroyed the dream that Napoleon could control the new Italy. His campaign had reawakened nationalist “forces whose power he had underestimated and which he was unable to control”. This cooled his relations with Russia and the Prussian threat had forced his campaign to a sudden halt.

Whilst the war of 1859 did not satisfy French aims it was not a total failure. Whilst the battles were indecisive, the victories over Austria had at least brought about the cession of Lombardy, which the Austrians never regained. This represented a major shift in the European balance in France’s favour, achieved without conflict with the old Quadruple Alliance. Prussia had only appeared once Austria defeated and so France had been able to pursue a quick, relatively successful campaign and to gain the negotiating advantage. However, the war concerned the other Great Powers and the Prussian mobilisation reminded Napoleon that her 1815 opponents “could contain France in the future as they had done in the past”. It is noteworthy that Napoleon never sent an army into Italy again to enforce his vision of a confederation. It must be remembered, however, that Austria lost most out of 1859 and that the French did achieve something, if only “half a victory”.

Plombiï¿½res had dictated that France should receive Nice and Savoy in return for her help against Austria but the signing of Villafranca while Austria still had Venetia annulled this. Through diplomacy in 1860 with Cavour Napoleon achieved his prize after all in return for agreement to the Piedmontese annexations of Emilia and Tuscany. This was a much greater mistake than the decision to go to war with Austria. Expansion of French territory had only been a secondary concern at Plombiï¿½res. Previously Napoleon could always claim to be championing the cause of the Italians against Austrian aggression. By vying for the territorial advantage later, Napoleon appeared as an expansionist . There was some nationalistic excuse for occupying Savoy but certainly not Nice; and the territories gave France control of two mountain passes into Italy.

A Mistake From Start to Finish - Louis Napoleon. (2020, Jun 02). Retrieved from https://studymoose.com/a-mistake-from-start-to-finish-louis-napoleon-essay 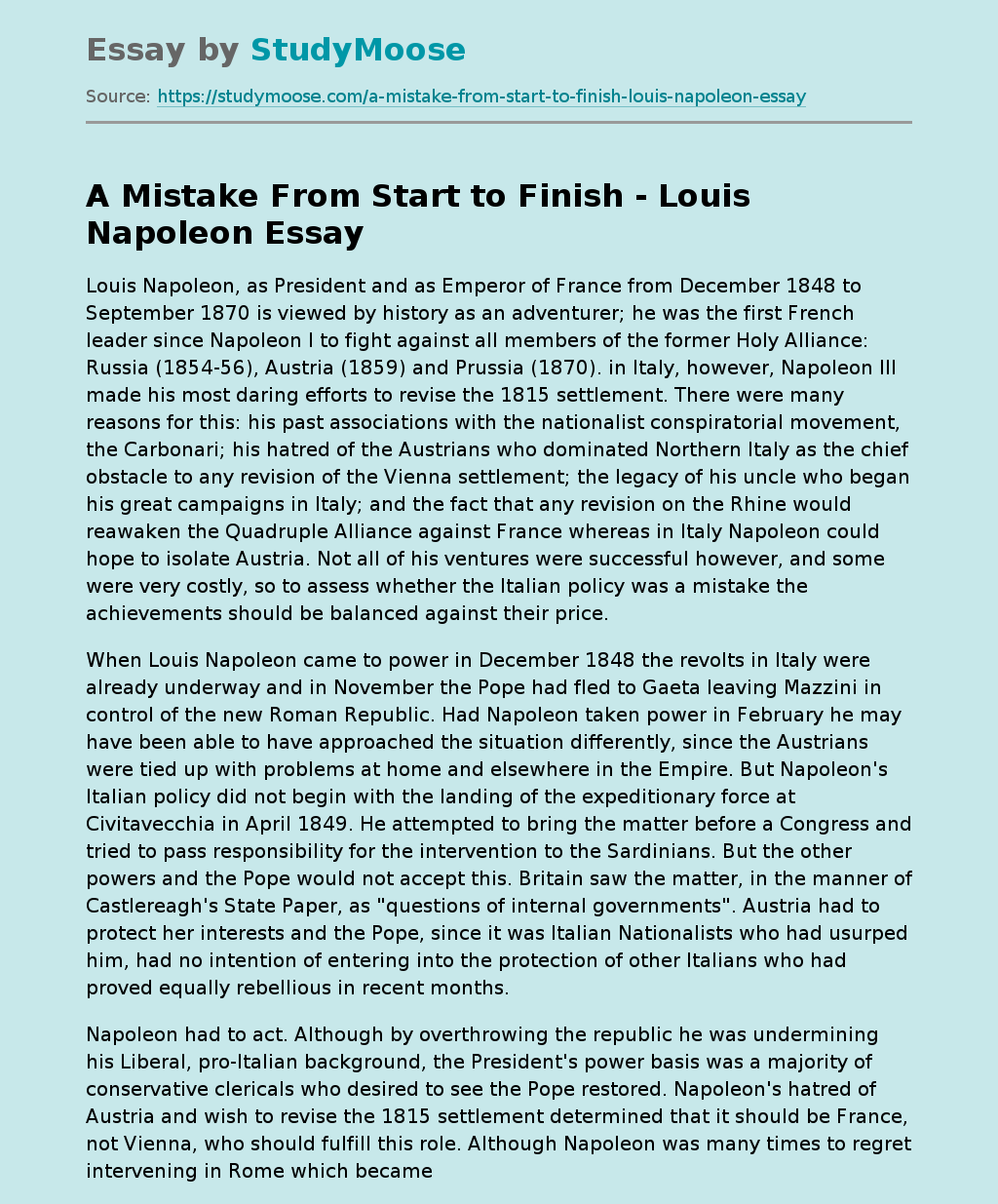