William Shakespeare’s play, A midsummer night dream, is different from all his other plays and this makes it the most performed and studied play not only in classical performances but also in contemporary performances’ title of the play is the first suggestion that the play heavily relies on the act of dreaming and dreams to put across various themes. Different from other plays by William Shakespeare such as Hamlet and Macbeth, this play presents not one but several themes that are present in today’s society.

Don't use plagiarized sources. Get your custom essay on
“ A Midsummer Night’s Dream: Plot Analysis ”
Get custom paper
NEW! smart matching with writer

Among the themes present in this play include unrequited love, revenge, jealousy, and spirit as well as the mortal’s world. However, one common feature that is present in almost every scene of this play is that almost every character at some point in the play falls asleep. This suggests that what follows is their dream rather than reality. William Shakespeare chooses to use dreams as the main representation of unreality and consciousness. Towards the end of the play in Puck’s final speech, he says that “And this weak and idle theme No more yielding than a dream’.

This makes the audience realize that Shakespeare structured his play around the notion of a dream to enable people to realize the effect of supernatural powers on the daily lives of an individual.

The play is about the love life of two lovers which suggests that love is the prevalent theme in this play. However, Shakespeare creates a connection between love and dreams by explaining stating that love is like a dream.

He then proceeds to describe how love not only makes a person behave in ways that are irritational and bizarre but also change people’s perception of reality a well as other people, the same way that a dream can affect someone. Dreams, in this play, not only alters the notion of the character of the natural world but also makes them escape the challenges in life by associating them with their dreams. For example, in Act III, Hermia dreams about a serpent and this dream changes his view of the forest. After waking up from the serpent dream, Hermia cries out in fear because she now starts to have a feeling that the forest is not a safe place and there could be serpents present which would attack her and try to eat her heart as she it had happened in her dream. Again, the dream changes Hermia’s notion of other people and the world in general when she dreams about Lysander’s betrayal which actually came to happen. After being rejected by Lysander as she had dreamt, Hermia gets in great fear of the world. Different from Hermia, Titania uses dreams to escape reality by regarding everything that happens in the wood as just a dream. For example, when Titania finds herself sleeping on the ground with an ass, she tells Oberon that she had just seen a vision of herself having a love for an ass. Titania does not consider this to be a reality and believes that it was just a dream. Regardless of the fact that her mind was full of love, she did not believe that she actually fell in love with an ass because to her this did not make any sense.

Several authors have studied this play in an effort to understand why Shakespeare chose to use dreams in his play. Among these authors is Robert Crossman who writes an essay titled “what is the Dream in A Midsummer Night’s Dream?”. In this essay, Crossman explains that Shakespeare used dreams to signify a world where people regarded their hard struggles as “dreams” and therefore they did not realize the worldly forces that influence their lives. 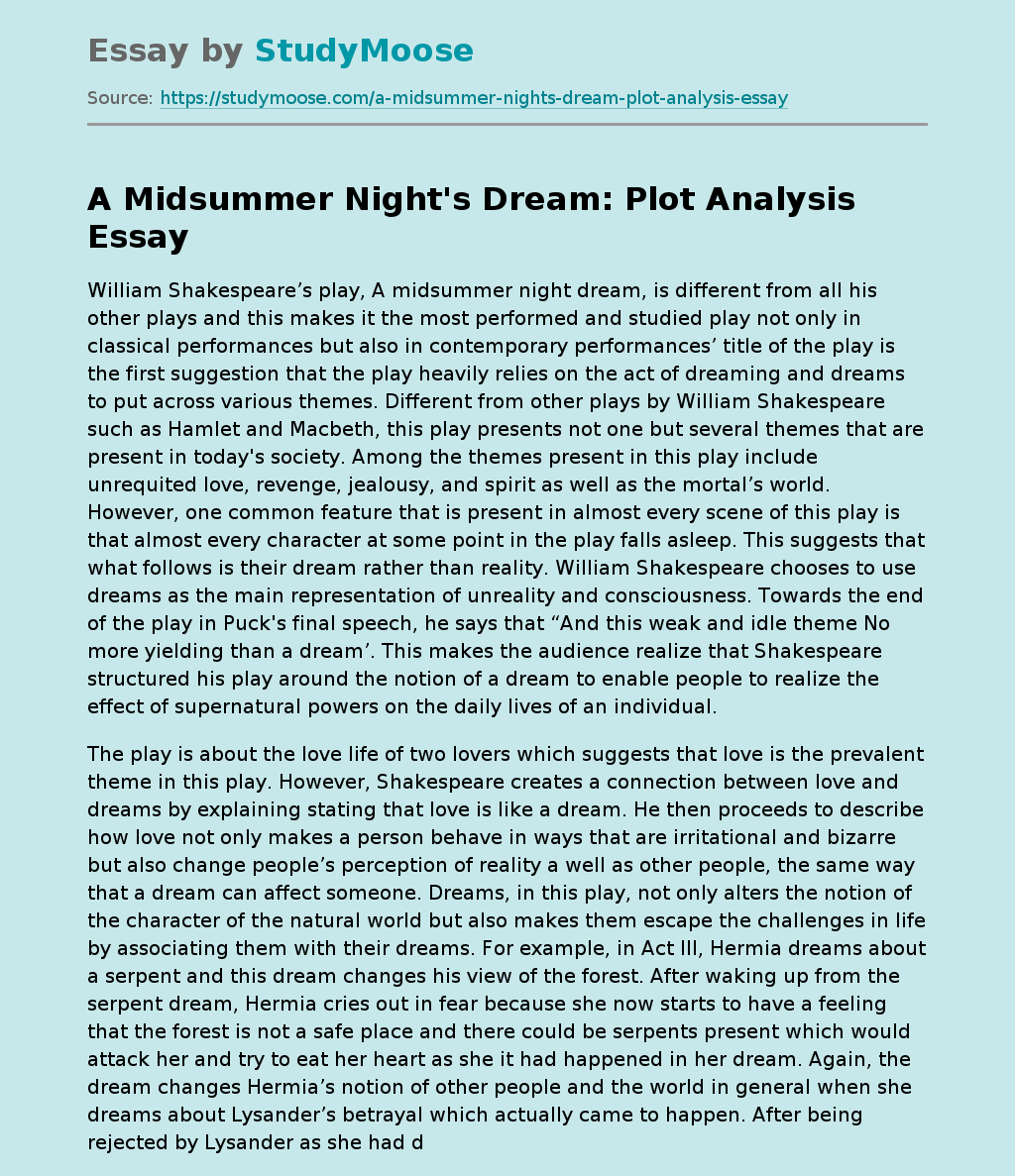