A Midsummer Night's Dream - one of Shakespeare's most beloved comedies

Many people have categorized A Midsummer Night’s Dream as a romantic comedy. But how accurate is this assessment? A Midsummer Night’s Dream is one of Shakespeare’s most beloved comedies and it is generally thought of as a sparkling romantic comedy. However, while the play is lovely and comedic, it also has a strong trace of darkness and cruelty, a sinister underside that is inextricable from its amorous themes. Midsummer may end with a series of happy weddings, but along the way it clearly depicts how male-female relationships can involve a great amount of cruelty, with the potential to spread discord throughout society.

Don't use plagiarized sources. Get your custom essay on
“ A Midsummer Night’s Dream – one of Shakespeare’s most beloved comedies ”
Get custom paper
NEW! smart matching with writer

Nearly all the male characters threaten their female counterparts with violence at some point in the play. Theseus, for example, won Hippolyta not through seduction or courtship but by military conquest, having vanquished the Amazons, her tribe of woman warriors. He says to her in the opening scene, “I wooed thee with my sword, / And won thy love doing thee injuries”, drawing an explicit connection between love and assault.

Later in the same scene, Egeus publicly threatens to kill Hermia, his daughter, if she does not consent to marry Demetrius. Oberon, for his part, does not put Titania at risk of true physical danger, but he does brainwash her with a love-potion for the express purpose of humiliating and humbling her. Lysander may be the only male who does not consciously seek to harm his mate. But even so, Hermia cannot escape peril. Just after the bewitched Lysander abandons her, she wakes from a nightmare, trembling with fear as she describes how she dreamt she saw “a serpent [eat her] heart away”.

Though Lysander isn’t in control of his own actions at this moment, Hermia’s subconscious still registers his desertion as an act of violation.

The female characters in the play, particularly Helena and Hermia, end up internalizing much of this violent behavior. In the most vicious exchange in the play, Lysander bluntly tells the lovesick Helena that he does not love her and that he is sick when he looks at her. He warns her that he will “do [her] mischief” in the woods a far more menacing promise when we realize that mischief had a much stronger connotation in the period, meaning something closer to harm or evil than naughtiness. Helena, however, is undeterred. She accepts the aggression directed at her and turns it into an argument for her stamina, pleading with him to treat her like his spaniel, since the more he beat[s] her, the more she will fawn on him. Eventually, the two young women fall victim to the hostility in the air and turn on one another. Their confrontation in Act III, scene ii is often played as a comic catfight, but that ignores the poignancy of Helena’s speech, in which she pleads with her sister not to rend [their] ancient love asunder by conspiring with the men to shame her. Hermia, however, does not listen, and the two dissolve into a torrent of mutual abuse. Even at the end of the play, when the couples are paired off harmoniously, it is unclear whether the women’s intimate friendship will ever be repaired.

Throughout the play, romantic strife is portrayed as a force that can spread, like a contagion. At one point, the whole earth becomes infected. When the sparring fairy monarchs,

Titania and Oberon, confront each other in Act II, scene I, Titania describes a tumultuous world filled with sickly clouds and rotting vegetation. She insists that this chaos has sprung from her and Oberon’s quarrel, and that they are the parents of the planet’s current state of turmoil.

A Midsummer Night’s Dream ends with several happy (if magically-induced) weddings, but even the joy of the closing celebration does not completely banish the play’s threatening undercurrent. The nuptials are commemorated with a clownish performance, but significantly, the craftsmen’s theme is a gruesome one: a romantic couple that meets a violent and tragic end. In addition, the blessings offered by Puck and Oberon seem to evoke more terror than goodwill. Oberon offers the more traditional blessing, wishing the couples fertility and lasting love. However, he also mentions blots of nature, such as harelips and other deformities, calling attention to the dangers that can befall vulnerable children even as he wards them away. Puck, for his part, spends most of his speech describing all the horrible things that lurk outside the wedding chamber door, such as hungry lions and ghosts from gaping graves. In the end, we don’t know if the newlyweds are inside experiencing the flush of matrimonial bliss or if the discord that has been bubbling up throughout the play has unsettled them: As Puck closes the door against the terrible creatures of the night, he shuts the audience out, as well. With the ultimate fate of our protagonists so ambiguous, A Midsummer Night’s Dream cannot properly be called a romantic comedy.

A Midsummer Night's Dream - one of Shakespeare's most beloved comedies. (2016, Dec 10). Retrieved from https://studymoose.com/a-midsummer-nights-dream-one-of-shakespeares-most-beloved-comedies-essay 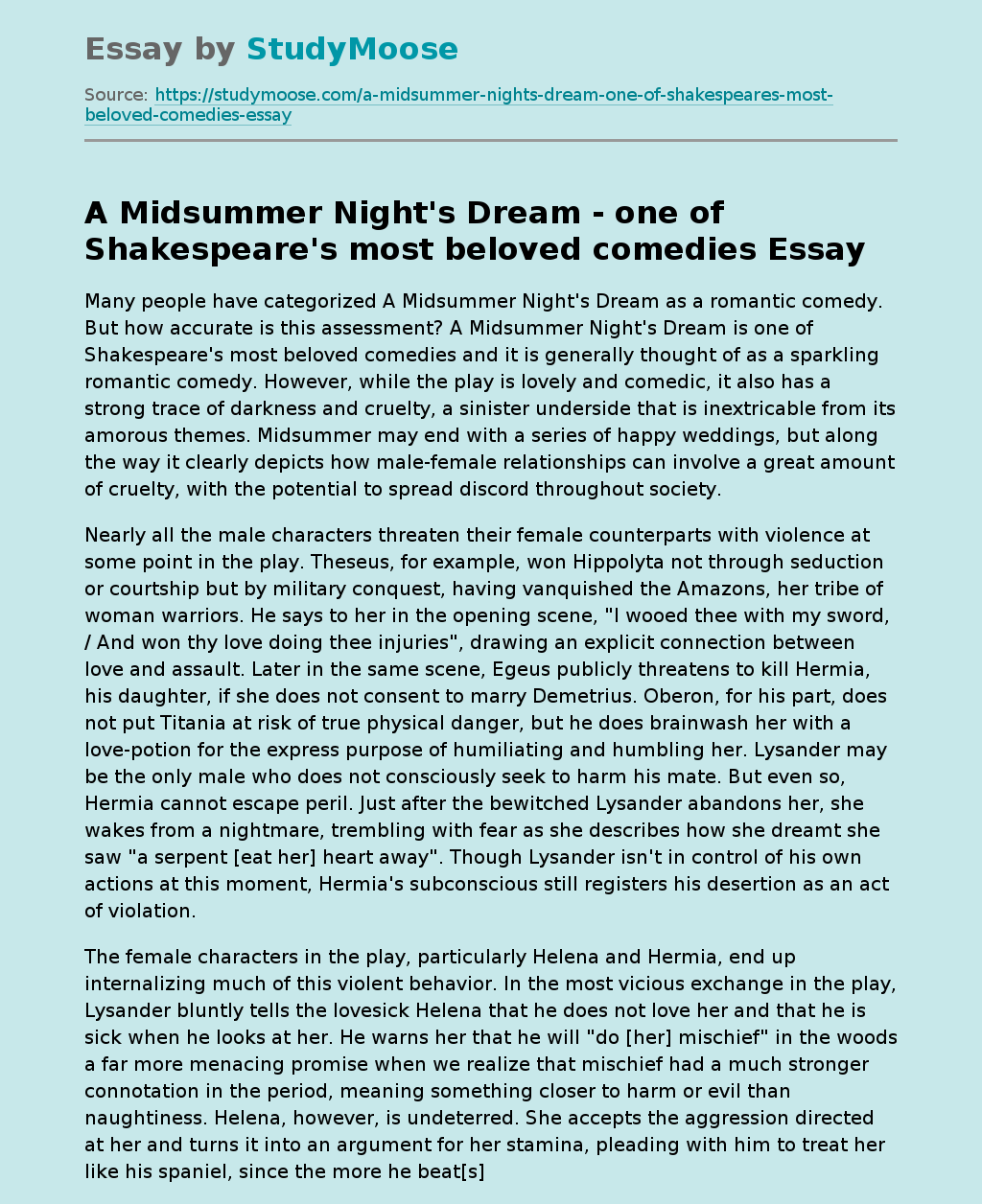