A Major Theme in ‘Our Day Out’

A major theme in ‘Our Day Out’ is the lack of education and opportunity for young people in the inner city. Using scenes from the play, show how Willy Russell makes the audience aware of this theme

The lack of education and opportunity affects young people in inner cities like Liverpool, these young people have never been given the chance to have a good education, and therefore they were just stuck in a states school, where there aren’t many people who care what grades they get and what they do once they leave school.

Don't use plagiarized sources. Get your custom essay on
“ A Major Theme in ‘Our Day Out’ ”
Get custom paper
NEW! smart matching with writer

In 1977 the factories that these young people would of been going to work in once they had left school, were starting to close down, as the docks and factories were going into further decline. So this meant that lots of people were losing there jobs, and homes. In todays life people are seeing the effects of this on there society.

Willy Russell uses the people in the play as dramatic devices, to get his point across about the children being deprived of a future, as they have hardly any opportunities and a bad education.

He uses humor in this play to keep the audience interested, and so that its such a sad, situation that it makes people upset. In the stage directions he goes into a lot of detail about the characters actions, so we know what they are doing and them we can figure out for our selves why, as the characters.

In the first scene we meet Carol, who we know is from a poorer family as in the stage directions it says ‘wearing a school uniform which doubles as a street outfit and her Sunday best.

’ This tells us that she can only afford one set of clothes. Also in this first scene we learn that Carol hasn’t been well educated as the was she speaks is in colloquial language, like when she says ‘There’s nott’n comin’ though.’ and also when she says things like y’ and t’. She also struggles to hold a full conversation as all of her responses are only a few words long. When the lollypop man is telling Carol that even though it looks like nothing is coming, how does she know that nothing is going to come speeding round the corner.

Carol comes across as being gullible, as Les the lollypop man does not no when something is going to come around the corner but still Carol believes him. Near then end of this scene Les and Carol start to talk about the progress class, which is the class that Carol is in at school. Les starts to become sarcastic about the class after carol explains to him what the progress class is ‘ y’ go down there in the week if y’ carn’t do sum or writing. If y’ backward like.’ then les responds by saying ‘ By Christ, I’ll bet bet she’s kept busy. They’re all bloody backward round here.’ which was his attempt to try and offend Carol, but she just accepts it, as she knows its the truth, where as Les though he was being sarcastic.

We know that Carol lives in a poor and deprived area, as just after Mrs Kay who is the progress class teacher, says ‘ Right. Now those who’ve got permission to come on the trip but haven’t yet paid, I want you to come over here.’ So to begin with we just get the impressing that some of the children might not of payed yet, but then when it says in the stage directions ‘ she moves a short distance away and all of the kids follow her.’ So this says that all the children in this class, which are all from this area, must be poor, as non of them had payed, which means that there parents, just don’t have enough money to pay for there child to have an outing with the school for a day.

In scene 6 on page 13 Carol has a conversation with Mrs Kay, about where she lives and how Carol wants more in her life. It starts out by Carol saying ‘ Isn’t it horrible, eh, miss.’ mrs Kays reply shows that she doesn’t really know what Carol is talking about at this point, but then when Carol try to explain it she does not really know what to say as she has poor vocabulary due to her poor education, we know that she has poor vocabulary as she says things like ‘ y’ know … all they thingy like. The dirt an’ that. (pause) I like them nice places.’ when she says this we know that she does not really know how to describe where she lives, and what it is she does not like so she, tells Mrs Kay what she does like, so that Mrs Kay can sort of understand what she is talking about. At the end of there conversation Carol ask Mrs Kay if she thinks that she could live in a nice place when she is older if she started to work hard at school now, this shows us that Carol does not really make a effort at school and that she does not like where she lives.

Mrs Kay replies to this by saying ‘Well you could try, couldn’t you, love. Eh?’ she says this as she does not want to give Carol false hope, and lie to her as Mrs Kay knows that Carol wont be able to live in one of them nice houses, but also she does not want to crush Carols dreams and make her have no hope, or be sad, so she replies with a question, so Carol still thinks that she could if she worked hard. Mrs Kay appears to be like a mother to Carol, as they have a close relationship. I think Mrs Kay treats Carol this way as Carol is close to her, and Carols parents probably do not care so Mrs Kay is there to be a mother figure in Carols life. Carol talks to Mrs Kay a lot and not really to the other children. I think that Mrs Kay feels sorry for Carol, and thinks that because Carol is such a sweet girl that she deserves better in life and just wants to be there for here.

Willy Russell knows what its like to be in a deprived area as he has taught in a school in liverpool ……….. ,

So far in the book we have found out mainly about Carol, and how she has a close relationship with Mrs Kay, 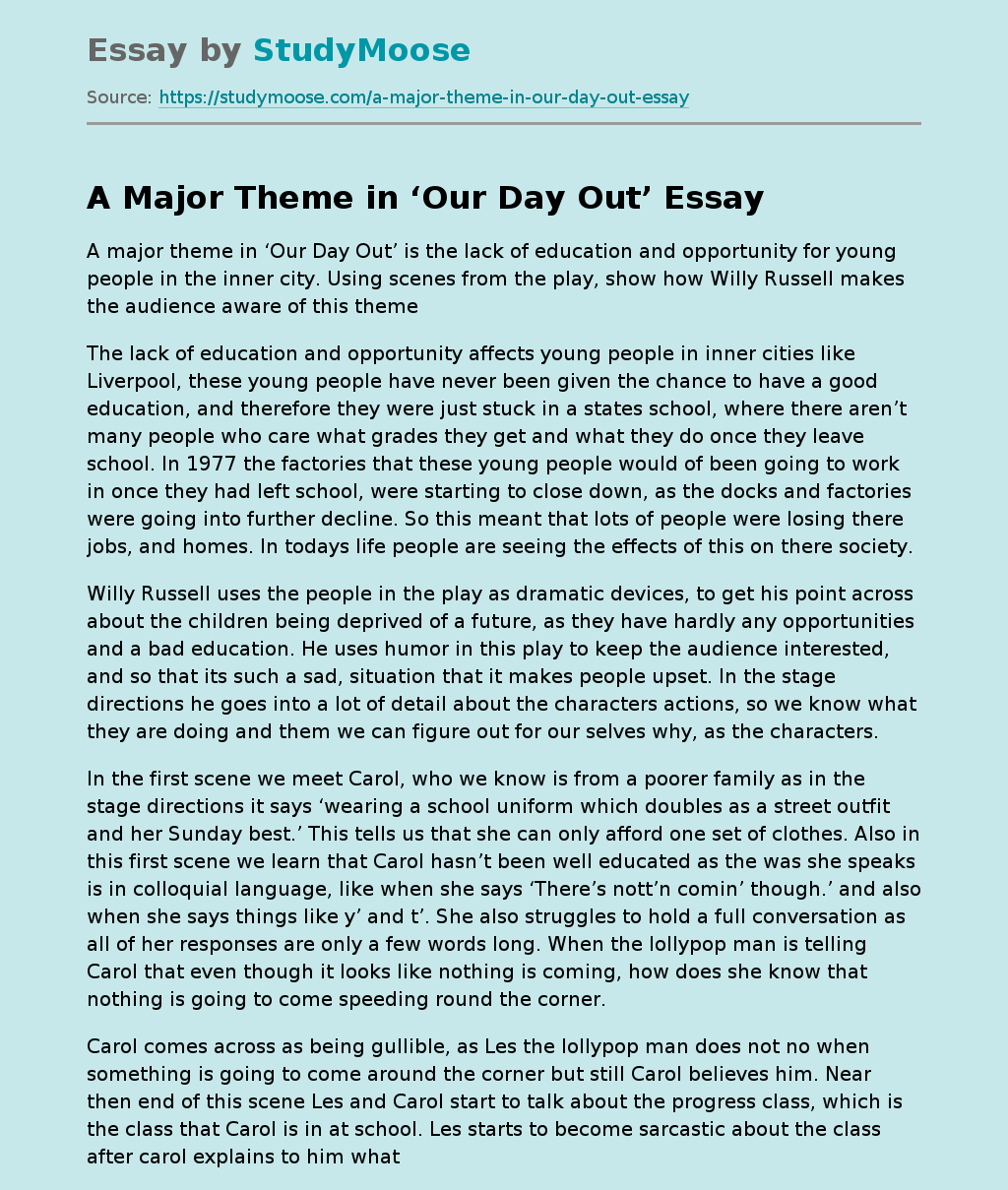