A Lesson before Dying: What Makes an Educated Man?

A Lesson before Dying is a memorable novel, set in Bayone, Louisiana in the 1940’s, about an uneducated, illiterate black man, Jefferson, who is falsely accused of murder and sentenced to death. While on trial, his defense attorney likened him to a hog, calling him nothing more than a fool and a cornered animal. Jefferson’s godmother wants him to become a man before he dies. She persuades two men, Grant Wiggins and Reverend Ambrose, to visit with Jefferson and teach him what it means to be a man.

Don't use plagiarized sources. Get your custom essay on
“ A Lesson before Dying: What Makes an Educated Man? ”
Get custom paper
NEW! smart matching with writer

While both men desire the same outcome, they disagree about what it means to be an educated man. Grant believes that his college degree gives him all the knowledge he needs. However, Reverend Ambrose believes that being educated goes deeper that reading, writing, and arithmetic. Grant Wiggins, the son of plantation workers, returns to his hometown after attending college with an attitude that his education somehow sets him apart the other black men living in his community.

He becomes a plantation teacher, completing the cycle of returning to his roots.

While he is outraged with how other blacks are treated, he does not use his education to help the cause. Instead, he becomes angry and bitter. He does not believe he can help Jefferson and he does not want to get involved: “What do I say to him? Do I know what a man is? Do I know how a man is supposed to die? I’m still trying to find out how a man should live.

Am I supposed to tell someone how to die who has never lived? ” (Gaines 31) Reverend Ambrose is a black preacher, determined to preach the gospel and lead people to salvation and an afterlife with Christ.

Reverend Ambrose wants the blacks in his community to live peacefully with the whites and to rise up from the ashes of slavery. He is kind and compassionate and lives a humble life. While he is not educated like Grant, he is very wise to the realities of life. He believes that his knowledge of people makes him more educated than Grant. Reverend Ambrose believes that Grant looks down on him, because he is uneducated. He is determined to put Grant in his place by calling him “boy” and telling him what he thinks of him, “When you act educated, I’ll call you Grant.

I’ll even call you Mr. Grant, when you act like a man. ” (Gaines 216) Reverend Ambrose is angry that Grant does not really see what Tante Lou has done for him. He is frustrated that with all of Grant’s education he still does not understand his people: “Cause reading, writing, and ‘rithmetic is not enough. You think that’s all they sent you to school for? They sent you to school to relieve pain, to relieve hurt–and if you have to lie to do it, then you lie. You lie and you lie and you lie…

You tell them that ’cause they have pain too, and you don’t want to add yours–and you lie. ” (Gaines 218) Reverend Ambrose understands why Tante Lou made sacrifices to send Grant to college. She wanted Grant to return home and make a difference for his people. It makes Reverend Ambrose angry that someone as educated as Grant cannot really see how people really feel. Reverend Ambrose believes that it is better to lie in order to prevent others from hurting. He wants Grant to reassure Jefferson of the existence of Heaven.

He wanted Grant to lie and say he believed in God and Heaven: “I won’t let you sent that boy’s soul to hell. ” He did not want Grant to acknowledge to Jefferson his lack of faith in God. He wants a dying man to have the hope of an afterlife that was better than his life here. Reverend Ambrose could not understand how an educated man would take away the hope of a man that set to be executed. While it would be easy to argue that Reverend Ambrose not as educated as Grant, one cannot overlook the fact that his worldly knowledge goes far deeper than Grant’s.

He understands the depths of people’s souls, and knows how to comfort and led them to knowledge and truth. Grant, on the other hand, is naive about other’s feelings. His education lacks real life knowledge, as well as the ability to interact with people. Reverend Ambrose sees where Grant is lacking and believes that until he opens his eyes and heart to those around him, he will never truly be educated.

A Lesson before Dying: What Makes an Educated Man?. (2016, Jul 17). Retrieved from http://studymoose.com/a-lesson-before-dying-what-makes-an-educated-man-essay 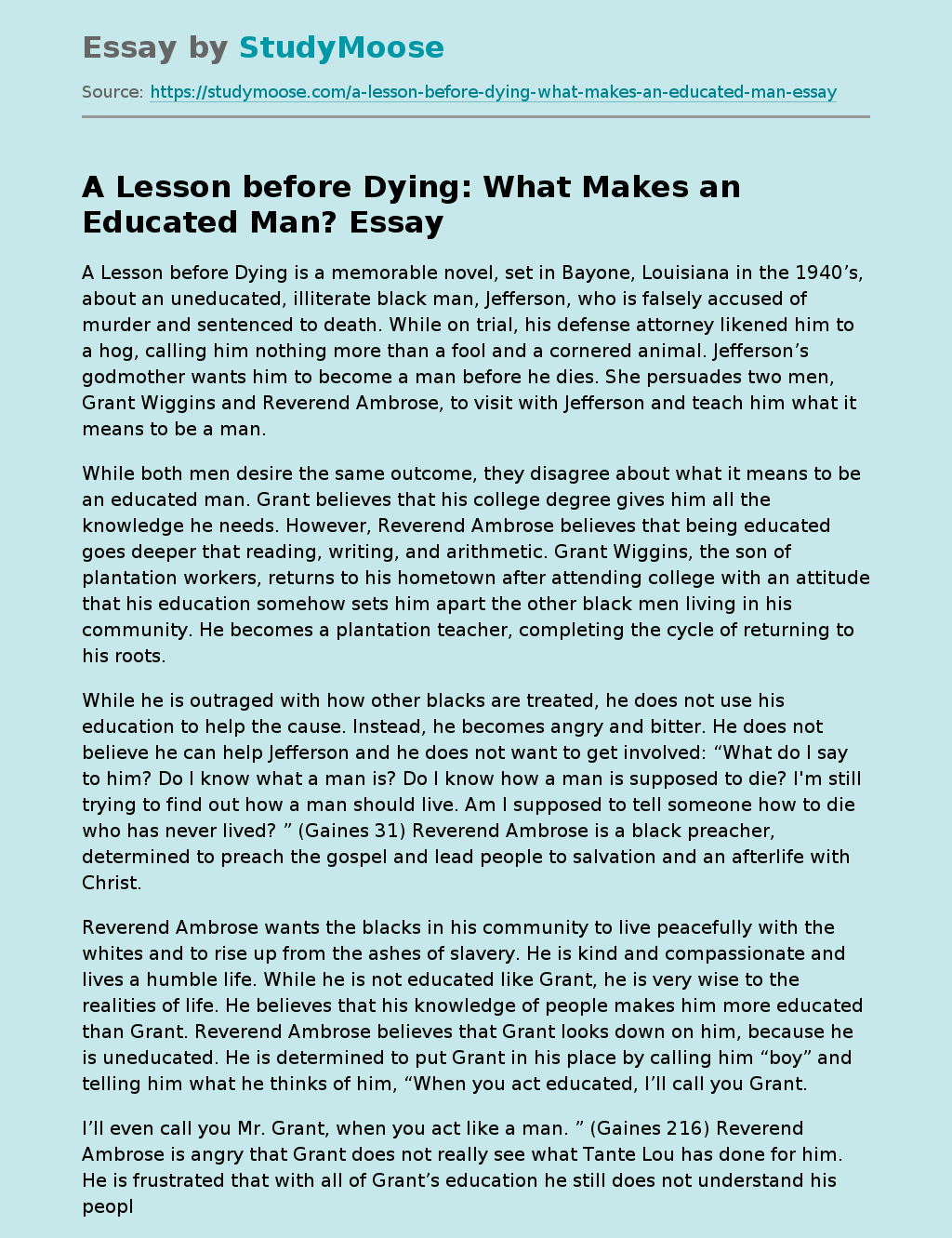