A Lesson Before Dying: an Examination of a Prodigious Storyteller

A good novel entertains the reader. An excellent novel entertains and enlightens the reader. Set in a Cajun community in the late 1940’s, A Lesson Before Dying is a heart-warming tale of injustice, acceptance and redemption. A Lesson Before Dying by Earnest J. Gaines is an excellent novel. Not only does Gaines inform the reader, he entertains will his effective storytelling. His use of symbolism, voice and stylistic devices keeps the reader enticed to the very last page. One way Gaines is an effective storyteller is his use of symbolism.

Don't use plagiarized sources. Get your custom essay on
“ A Lesson Before Dying: an Examination of a Prodigious Storyteller ”
Get custom paper
NEW! smart matching with writer

The first symbol to present itself in A Lesson Before Dying is the hog. During trial for robbery and first degree murder, Jefferson’s attorney attempts to get him off by dehumanizing him and denouncing his intelligence, claiming he is incapable of murder because he doesn’t have a “modicum of intelligence” (Gaines 7). He even goes so far as to compare Jefferson to a hog: “Why, I would just as soon put a hog in the electric chair as this” (Gaines 8).

This statement drives the central conflict. The hog, a filthy animal, represents the way the whites treated and regarded the blacks; as dirty, unintelligent and inferior animals, whose sole purpose was to work for them. The second symbol to appear in the novel is food. In A Lesson Before Dying, Tante Lou uses food as a means of affection. When Grant tells her he is going into town to eat, he says “Nothing could have hurt her more when I said I was not going to eat her food” (Gaines 24).

Miss Emma brings Jefferson his favourite foods while in prison, to try and comfort him and show him he is loved. When Jefferson refuses to eat, Miss Emma takes it straight to heart and is greatly distressed. Grant even tells Jefferson to eat for Miss Emma, to show that he loves her. In addition to symbolizing love, food also symbolizes Jefferson’s humanity in the novel. Jefferson, taking being called a hog as a great emotional blow, refuses to eat, claiming “That’s for youmans” (Gaines 83).

It is only when Jefferson reconnects with his humanity that he agrees to eat. The final symbol in A Lesson Before Dying is the notebook. After many attempts to reach Jefferson—from Grant, Miss Emma and Reverend Amborse, Grant gives him a notebook to write his thoughts in. In this notebook, Jefferson reflects upon life and death. He writes to Grant about all the injustices he has faced—saying “it look like the lord just work for wite folks” (Gaines 227) and the his impending fate. The notebook represents Jefferson’s acceptance of his unjust life and his newfound sense of self-worth. In addition, the notebook also shows the bond which formed between Grant and Jefferson. By writing to Grant, he finally accepted Grant’s guidance and showed that Grant made a difference in his short life. As seen through these examples, Gaines uses many symbols to effectively tell his story. The second reason Gaines is an effective story-teller, is his utilization of voice.

Most of a Lesson Before Dying is conveyed through stream of consciousness. Narrated by Grant Wiggins, much of the novel is dedicated to Grant’s internal monologue: “What am I doing? Am I reaching them at all? They are acting exactly as the old men did earlier. They are fifty year younger, maybe more, but doing the same thing those old men who never attended school a day in their lives. Is it just a vicious circle? Am I doing anything?” (Gaines 62) Another way Gaines utilizes voice is through his use of Cajun dialect.

Rather than having the dialogue written in proper English form, Gaines presents it exactly how the characters speak: “I didn’t raise no hog, and I don’t want no hog to go set in that chair. I want a man to set in that chair, Mr. Henri” (Gaines 20). The final form of voice used is epistolary voice. All of Chapter 29 is told through Jefferson’s diary, directed to Grant, to convey Jefferson’s last days on earth. For these reasons, Gaines’ is an effective storyteller because he uses eclectic and creative voice techniques to give the novel a feeling authenticity.

The character Paul is a perfect example of Gaines’ use of charactonym. Being one of the first white men in the story to accept the black people, it could be said that he is so named after Paul the Apostle, who “was one of the most influential early Christian missionaries” (Livingstone, and Cross 1840). The final stylistic device used paradox. For example, when Grant describes Jefferson’s trial, he says “I was not there, yet I was there” (Gaines 1). All in all, Gaines uses many efficient stylistic devices to tell his story in an effective manner.

Gaines’ ability to effectively tell a story—through symbolism, voice and other stylistic devices, has created a highly stimulating and moving read. A Lesson Before Dying is a emotional and enlightening tale that is bound to touch all those who read it.

A Lesson Before Dying: an Examination of a Prodigious Storyteller. (2016, Nov 13). Retrieved from https://studymoose.com/a-lesson-before-dying-an-examination-of-a-prodigious-storyteller-essay 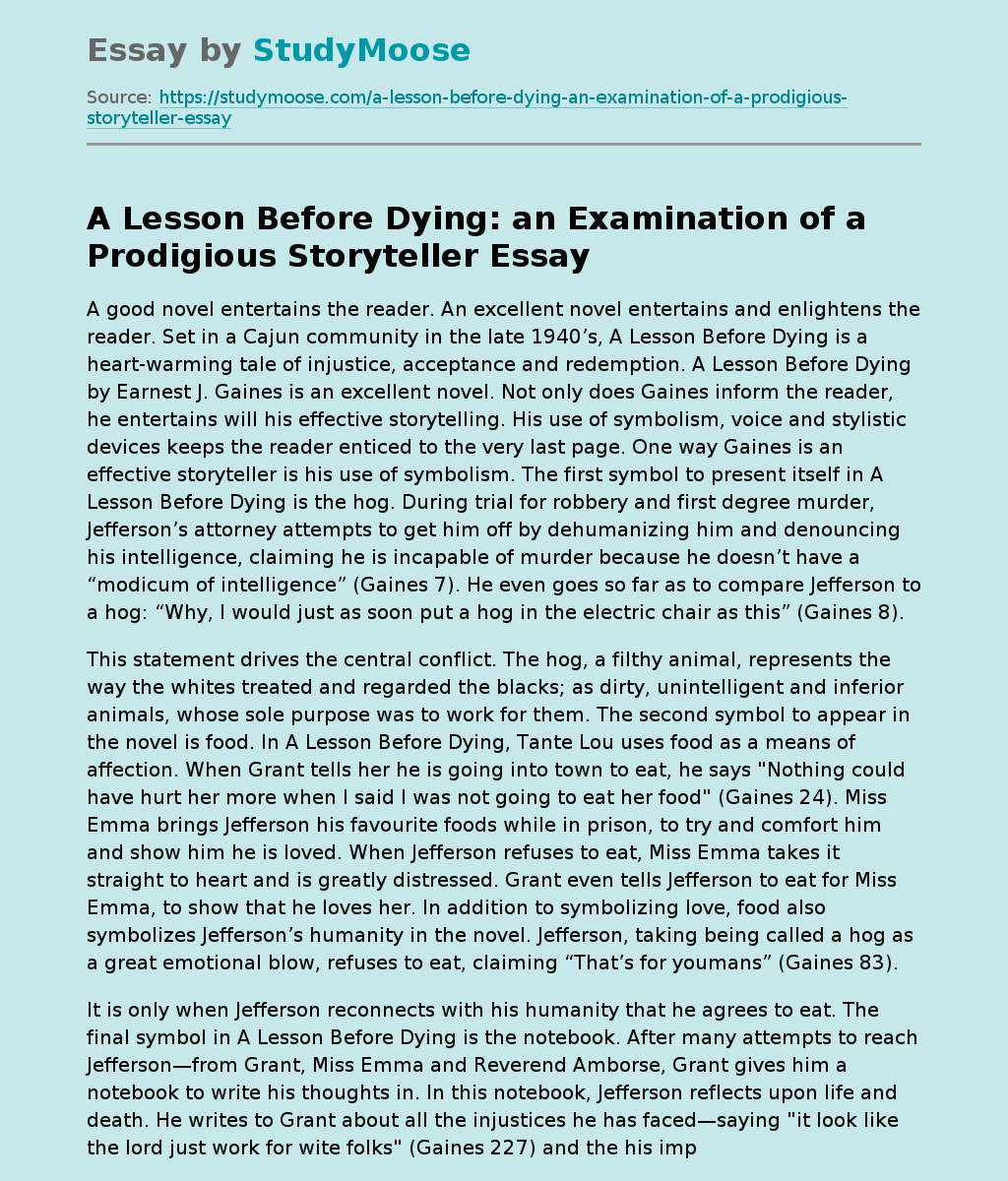