Most people were taught to divide history in ages, eras, and in some cases decades , Tom Standage seems to divide history in the popular beverage of the time period. In “A History of the World in 6 Glasses” the author brings the reader to an interesting timeline of our history. Fantastically written and catches attention to all who wants to learn about everyday drinks and how they became so popular. Not only does this book share information about these beverages it also brings light to the actual history of the world and with vibrant tone and interesting facts, Standage successfully made an interesting historical novel.

Don't use plagiarized sources. Get your custom essay on
“ Tom Standage’s divide of history ”
Get custom paper
NEW! smart matching with writer

Beginning with beer tracing back to ancient times in Mesopotamia and ending with Coca-Cola in modern day United States, Standage properly analyzes social, political, and economical issues of all six of the beverages times, and cleverly does so in order to maintain the readers interest. Each beverage played their role in history and almost all beverages were cherished yet hated at the same time.

All beverages containing a drug whether it is alcohol (Beer, Wine ,Spirits) or caffeine (coffee, tea, Coca-Cola).

Beer originated from Mesopotamians sometime around 10,000 BCE due to hunter and gathers collecting cereal grains, Cereal grains being a easily harvested food that lasts winter plenty was collected . Later on from 9,000 BCE to 4,000 BCE for some reason these nomadic people converted to a more civilized life style and began farming instead of gathering and created a substance known as gruel (made from cereal grains). if you let a thin gruel sit in the sun beer would be created , it was rumored that god gave man the gift of beer but the most realistic story is that farmer accidently left thin gruel in the sun and adored the taste .

Beer became not only the drink for social meetings but also became a icon for religious meetings as well. Civilizations began to sprout up around beer and this is the beverage that started lifestyle we know today.

As the Egyptians said ” the mouth of a perfectly content man is filled with beer”. “Baths, wine and sex ruin our bodies. But what makes life worth living except baths, wine and sex?” from the corpus Inscriptionis . Wine pulled civilizations closer and even brought about war , slaves to rulers and everything in between were drinking wine and it became the new drink. During the time of great literature, philosophy and empires wine hit the mouth of every man woman and child for thousands of years . Rulers drank 10 year old aged white wine out of golden bowls as slaves drank wine made from left over vines and spoiled grapes in clay vases, Yes there were differences in the wine people drank but everyone drunk it. Wine became so popular that people thought it was actually in some cases holy but in others was used for medicinal purposes and of course recreational use.

Spirits such as rum, and brandy swept through all of Europe and the middle east, it was founded by a process we know as distillation. People loved it and in some cases it was used as a currency for slaves, workers , and products. Due to these spirits being developed at this time period Trade routes on sea were developing to increase shipping time and make everything more cost effective. Settlers to the New World brought spirits along with slavery and began life on a new land .

The Great Soberer known by many as coffee , this phrase is quite amusing knowing that coffee doesn’t make you sober it only makes you alert, combining alcohol and caffeine is a terrible feeling and a awful idea and ironically many didn’t know that. Coffee became the Muslims alcohol and many were for it yet also so many against it . Many tried to get it outlawed in Muslim cities and decrease consumption of it, thankfully these attempts failed and humans began to realize the pros of coffee. Not only did coffee make you sharper and more alert it also brought together many social events and took part in many business deals as well as political arguments. Coffee pushed to further trading and helped strengthen many economies.

“Thank God for tea! What would the world do without tea? How did it exist?” from British writer Sydney Smith Tea was amazing and rather impressive, but to the Chinese Tea caused their empire to fall and many wars. considering tea contained caffeine it had the same effects as coffee, it was just more enjoyable and more consumed. To this day the British still enjoy tea and is consumed more than 66 liters per person per year. With the rise of tea the British grew with it and became economically and militarily great.

The rise of Coca-Cola brought scandals with it and along came the might of the United States. During this time period WWI and WWII were in full conflict , the cold war , 911 , and the war on the middle east also took their place . The government was busy fighting other countries but was also fighting to maintain a set of morals through the public. Many thought Coca-Cola promoted sex and various other sexual acts, it was never proven that it did nor that it didn’t. ” A billion hours ago, human life appeared on earth. A billion minutes ago, Christianity emerged. A billion seconds ago, the Beatles changed music. A billion Coca-Colas ago was yesterday morning.” the chief executive of Coca-Cola shows how popular this beverage was ,and to this day it is still increasing.

Standage incorporated his main idea well throughout the book by showing the correlation between these 6 beverages and the history of the world by using many facts and historical evidence. Each time period easily progresses into the next, the author is constantly using dates and correlating certain key events in history so the reader can’t find themselves lost or confused at any point in this novel. To help the reader stay on track Standage uses eight pages worth of sources ranging from other novels, old scriptures, diaries, and even newspapers. This author is incredibly impresses me with his research he must’ve done to create this piece. Most sources can be proved to be reliable however not all sources from thousands of years ago can be tested for reliability.

After reading one may realize that their knowledge of history has incredibly increased , Standage achieved his goal of making a educational novel also incredibly interesting and fun to read . while merging the stimulating beverages with history the author gives us the view point of different members of society all who drink such liquids, a broad spectrum of views from slaves and peasants to elite members of society and rulers. Most authors retell history with their own personal beliefs and biases , it is quite surprising and intriguing how Standage managed to discuss all of history from 15,000 BCE to modern day without being biased about any movement, war , or law passed the reader receives one hundred percent fact with a tasteful wordy tone.

Most readers won’t enjoy a historical novel , mainly due to the fact that they all have the same boring tone , the same lay out , and the same boring facts .” A History of the World in 6 Glasses” stands out from others we as readers can relate to history better once the author spices it up by adding beverages we all enjoy. There of course are other factors to why this is such a fantastic novel , including the authors tone , the incredible amount of detail , and hard hitting facts. This Novel is definitely worth the time and is a must read to all who love caffeine, alcohol, or history .

When this book is being read absolutely take you own time to ponder some of the great philosophical quotes Standage uses in this book , ” Wine Was given to man as a balm, and in order to implant modesty in the soul , and health and strength in the body”.(65) Plato saw drinking as a way to test oneself , by submitting to the passions aroused by drinking. Also ” Why should a man obey his father, or a scholar his teacher, if they were technically equals? Placing too much power in the hands of the ordinary people”(65). Using these quotes the author holds the readers interest by creating thought and brings the reader back in for more details and facts. An absolutely fantastic novel and is highly suggested to all readers everywhere. 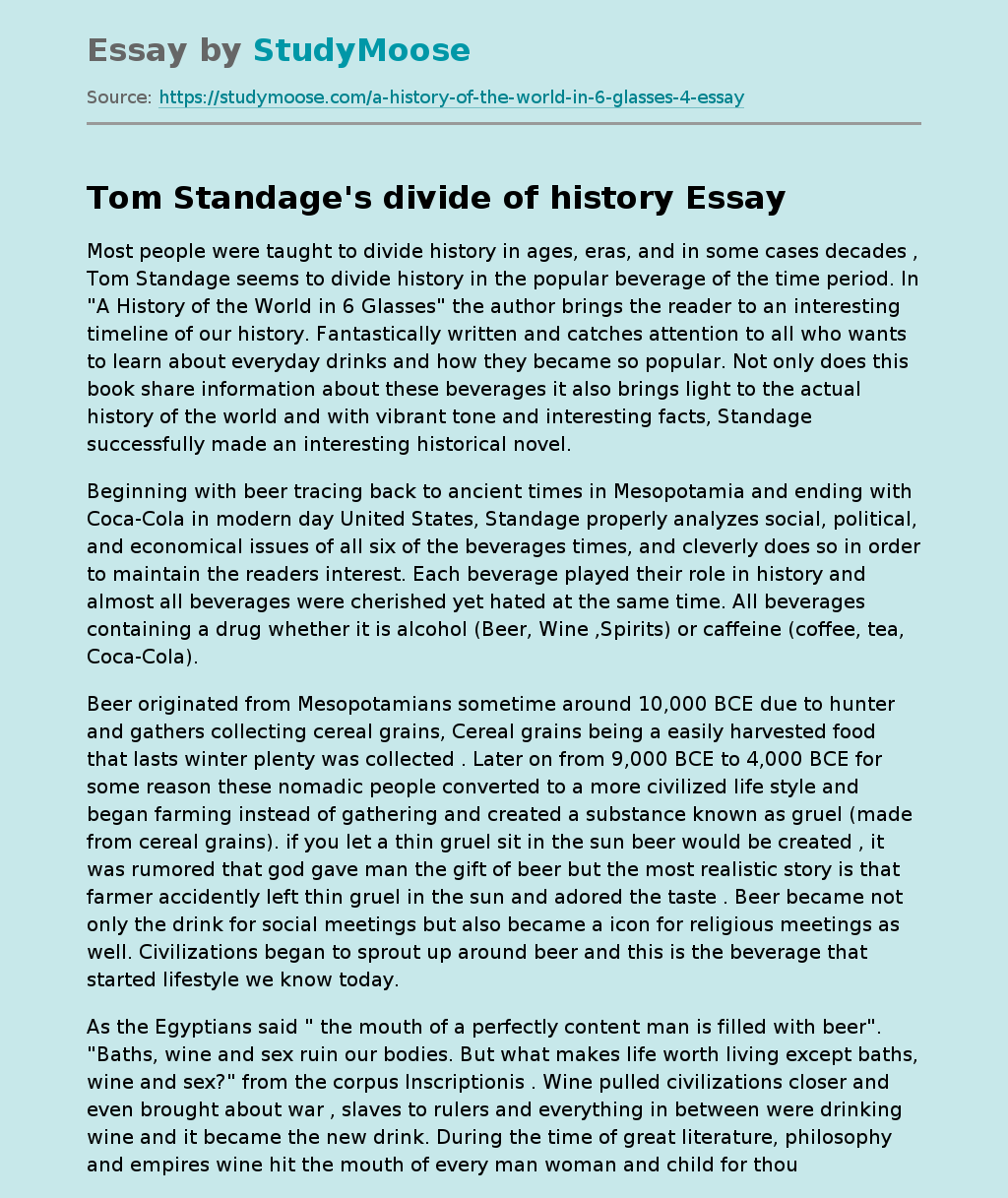