Julius Robert Oppenheimer, father of the atomic bomb, successfully tested the first nuclear weapon on July 16th, 1945, and thought “Now I am become Death, the destroyer of worlds”. 21 days later the United States used the atomic bomb and obliterated the Japanese city of Hiroshima, killing over 100,000 people and levelling all structures. The Japanese war council believed the U.S. could only prepare one or two more bombs in the foreseeable future and were willing to endure additional nuclear strikes, but the U.

Don't use plagiarized sources. Get your custom essay on
“ A History of the Atomic Bomb and Its Role in World War II ”
Get custom paper
NEW! smart matching with writer

S.S.R promptly declared war and left the Japanese no other option and thus World War Two concluded. It was at this point that the ethics of the bombings were truly questioned as a society; many found them to be acts of bloodthirst and hatred, an excessive use of force against an already dying nation. Unfortunately those in dissent fail to recognize the alternative military course of action and are unaware of formidable tenacity of the opposition. The atomic bombings of Hiroshima and Nagasaki were necessary because they prevented the secondary alternative of a mass assault on the Japanese mainland which would have resulted in an overwhelmingly larger casualty rate for both countries.

The United States and Japan alike were preparing for a massive ground war and both had casualty projections that dwarf the losses from the two atomic bombings. America had been planning and preparing for its assault on the Japanese mainland even before the surrender of Italy and Germany in a strategy called Operation Downfall. Chief of Staff and General of the Army George Marshall discovered that the Japanese were massing coastal defenses, and using British codebreaking intelligence coupled with statistics from a previous battle analogous with the circumstances of Downfall, the battle of Okinawa, he and his wartime council calculated the casualty rate to be between 1.

7 and 4 million for Allied forces alone. On the Japanese side of the equation, the Vice Chief of the Imperial Japanese Navy General Staff Vice Admiral Takijiro Onishi determined the casualty rate of defensive strategy Operation Ketsugo to be around 20 million. The use of the atomic bomb was extremely preferable for the Allied forces and Japan in the prevention of an outright massacre. However, some find the killing of civilians to be inhumane compared to the killing of many more soldiers, but how do we define civilians and would they have been truly safer had the operations Downfall and Ketsugo played out?

The Japanese planned to use civilians in a defensive militia and soldiers who were drafted had been civilians just years before. The Kokumin Giyu Sentotai, or Volunteer Fighting Corps, was a government-issued draft of men 15-60 years old and unmarried women 17-40 years old to assist in defensive emergency procedures, trained in rudimentary first-aid, firefighting and combat. The Corps was extremely unsupplied and were mostly armed with only melee weapons or grenades. Due to the forced Japanese surrender, only 2 million out of 28 “volunteers” deemed fit for combat were recruited, and few recruits experienced combat. If there is to be any evil found in the treatment of civilians it would be that of the Japanese, since draftees of the Axis and Allied armies were civilians only several years earlier but given better training and means of defending themselves than the emergency militia that was the Volunteer Fighting Corps.

John Berger, artist and writer, finds the atomic bombings to be terrorist actions, but fails to logically analyze their context and consequences. In an excerpt of his collection of essays, Paired Readings: On the Reality of War, Hiroshima presents first-hand accounts of the bombings from survivors in the form of drawings and descriptions, along with an extensive opinion from Berger. He states “The two bombs dropped on Japan were terrorist actions. The calculation and indiscriminancy were terrorist. The small groups of terrorists operating today are, by comparison, humane killers. Today terrorist groups mostly represent small nations who are disputing large powers whereas Hiroshima was perpetrated by the most powerful alliance in the world against an enemy who was already prepared to negotiate, and was admitting defeat” (Berger, 320). Berger ultimately takes several stances: positions of power and indiscriminancy govern the ethics of military actions, and Japan was prepared to negotiate and admitting defeat. Firstly, Japan declared to the world that they had no intention of surrender and proved it. The assemblance of Volunteer Fighting Corps, which trained the majority of the population of Japan for combat, along with the practice of Bushido, a code of conduct that literally translates into “the way of the warrior”, showed that Japan would rather die than lose the war. By arming civilians, they are forced to be targets of enemy soldiers without having any substantial offensive or defensive capabilities themselves. Berger speaks of stronger powers being indiscriminate in their actions being terrorist, when it is the Japanese government and military forcing men, unmarried women and children within a vast age group to wield sharpened bamboo sticks and hand grenades against tanks, aircraft and artillery, in reality being a death sentence. Using Berger’s logic, civilian militias, drafts, and just about any order issued by a superior officer in wartime is a terrorist action. Since this loose definition of terrorism is so easily applied, then it is a matter of relativity, determining which action is “more” terrorist, and the numbers vastly weigh in favor of nuclear deterrents over full-scale war, a precedent followed to this day since the bombings of Hiroshima and Nagasaki.

There were two options for Allied forces: deploy two nuclear warheads or order armies into the mainland. The former killed around 200,000 soldiers and civilians while the latter was expected to kill over 20,000,000. Berger, advocating for the condemnation of the atomic bombings, found the killing of civilians to be inhumane and the overall attack immorally excessive. However, Berger’s definition of a civilian is questionable when the difference between soldier and civilian is several months of target practice and a rifle, a definition which becomes especially unclear when the Japanese began arming women and children. Secondly, ordering an invasion force of several million onto the island nation to battle millions of Japanese soldiers and militia is far more excessive than the bombing of Hiroshima and Nagasaki. Berger’s Hiroshima is full of horrifying depictions from survivors, but for every picture of hell are 100 pictures of pure ecstasy from those who did not have to kill and were not killed themselves by the prevention of Operations Downfall and Ketsugo.

A History of the Atomic Bomb and Its Role in World War II. (2021, Sep 13). Retrieved from https://studymoose.com/a-history-of-the-atomic-bomb-and-its-role-in-world-war-ii-essay 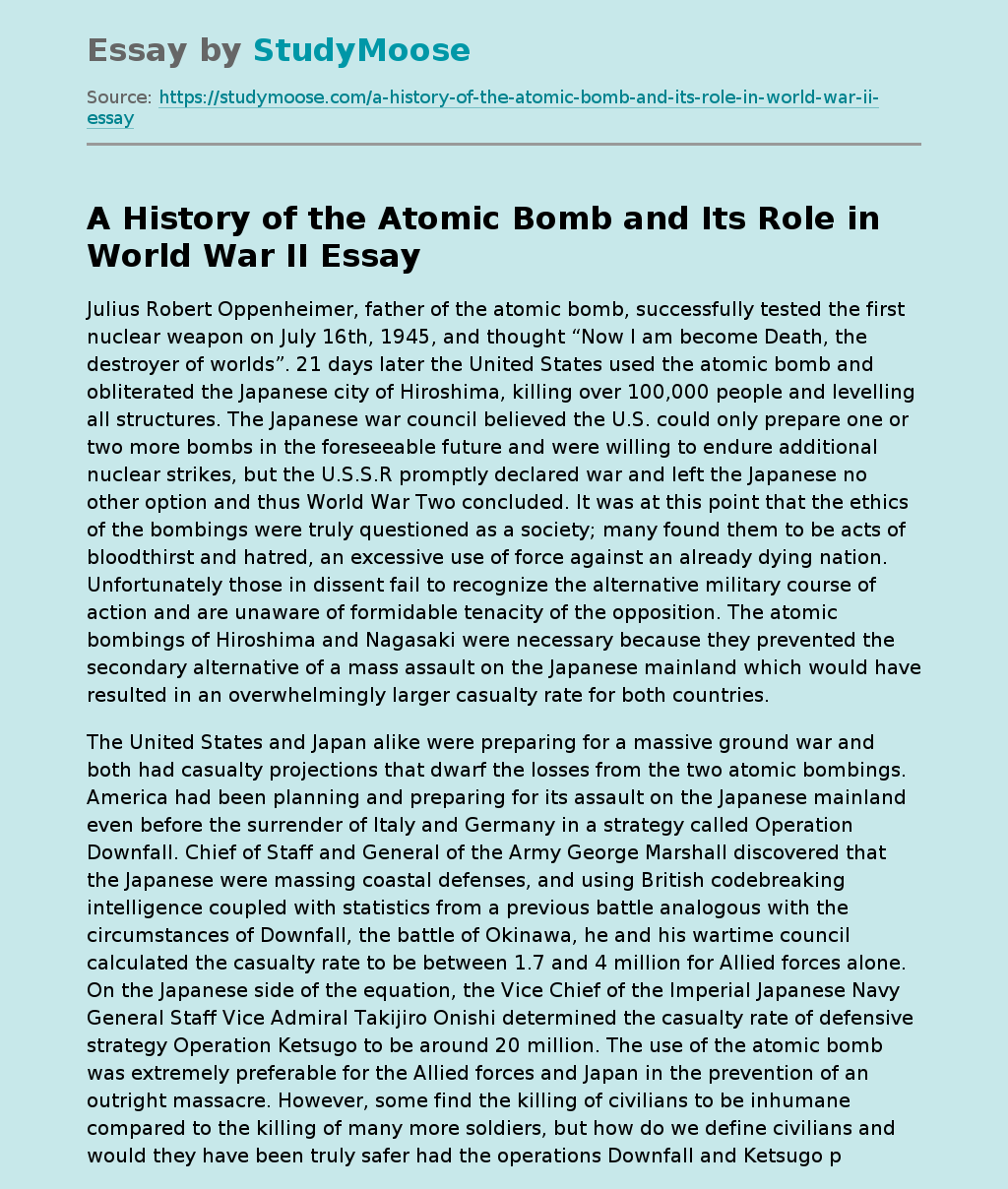