A History of Oppression: the Mistreatment of Australian Aboriginals

Cases of oppression are very much present within our world’s history, and even in most societies today. Being rich in history, Australia is a large example of oppression in our world. Not only can we find koala bears and kangaroos in the continent of Australia, but also the world’s oldest existing culture of aboriginal people (Aboriginal Australia – EmbraceAustralia. com). For nearly 50,000 years, Australia has served as home to these ancient indigenous people (Aboriginal Australia – EmbraceAustralia. com). Australia’s natives have been victims to oppression in many ways and for various reasons for nearly 200 years.

Don't use plagiarized sources. Get your custom essay on
“ A History of Oppression: the Mistreatment of Australian Aboriginals ”
Get custom paper
NEW! smart matching with writer

They’re land had been taken over by European settlers, and later on they faced more oppression when attempts to assimilate Indigenous people into white society were made. For over a century, Australia’s aborigines have been faced with many racist prejudices and several severe cases of oppression. Issues amongst the indigenous people began in the late 1700’s, shortly after the arrival of European settlers.

The Aboriginals had to deal with intruders of whom they had no prior knowledge of, and the vastly different societies and cultures of these two groups of people. As European colonization began to settle down, Australia’s aboriginals were seen as lower class and savage beings by the “superior” Europeans (Aboriginals Rights – EmbraceAustralia.

com). By the mid 1800’s, the Australian Government began to fear for the future of children Aborigines and issued the “Forced Assimilation Policy” in 1869 (Aboriginal Rights – EmbraceAustralia. com).

It was not until the 1970’s that the Policy of Assimilation ended (Aboriginal Rights – EmbraceAustralia. com). Although aboriginal rights have greatly evolved into the present, Australia’s natives still battle against many prejudices and acts of racism even in today’s society. These indigenous people are often labeled by others to be “wide-nosed and dark-skinned” and live their ancient tribal lifestyles filled with crime, violence and drinking. In addition, numerous people still believe in false Aboriginal stereotypes.

For example, aboriginals are problematic, un-educated people who follow no religion, suffer from poor iets and are given too much welfare, all of which are not necessarily true (Stereotypes about Aboriginal Australians – Creativespirits. info). This issue is a very important part of Australian history. As we look deeper into the breakdown of Aboriginal mistreatment, many contributing factors can be found. The root of this issue can be traced back to the white settlement. With the arrival of the Europeans, Aboriginals were immediately faced with many problems. The Europeans brought along many new diseases and illnesses to which the Aboriginals had no immunity.

Epidemics created by the smallpox and even the common cold instantly killed nearly half of the Aboriginal population, ultimately, creating a barrier between the indigenous people and the Europeans (History of Australia – EmbraceAustralia. com). This immediately put the Aborigines in an unfortunate position where they were now much weaker, and therefore deemed inferior to the settlers. Naturally, white settlers began asking the Indigenous people for their labour in exchange for goods, and claiming Aboriginal land for “economic purposes” (The Social, Cultural and Historical Context of Aboriginal and Torres Strait Islander Australians).

The Aboriginal population, now considerably much smaller, had difficulty when proving ownership and power over their homeland. European settlers were now stronger and could claim territories easily. This contributed not only to the expansion of the European settlers and to the growth of their power, but also to the issue of oppression in Australia. Every day, people around the world of all races, genders, ages and cultures are faced with the degradation and suffering of racism and oppression. Australia’s Aboriginals and descendants are most certainly no stranger to these horrifying issues.

During the Assimilation Policy, more than 100,000 indigenous children were separated from their Aboriginal families and homes (Aboriginal Rights – EmbraceAustralia. com). Also, it is estimated that as a result of the white settlement more than 600,000 Aboriginal people had died from the spread of disease, malnutrition and poor living conditions (Racism in Australia, John Pilger). Other than obvious racial discrimination towards Australia’s natives, there are other reasons why these people were oppressed. In order for the European colonies in Australia to gain power and grow their economy, they needed land and labour-good exchanges.

The European obtained these through the oppression of Indigenous people (The Social, Cultural and Historical Context of Aboriginal and torres Strait Islander Australians). The differences between the style of living of the Whites and the Aboriginals are huge. The Europeans often thought of the Indigenous people as savages and wished to eliminate their traditional and savage ways. In order to do so, they Australian Government issued the Forced Assimilation Policy in 1869. This policy ensured that Aboriginal children were systematically removed from their families, and placed with white families.

The idea of this act being that the young children would learn and grow up to be modern, white Australians. The Government believed that the integration of Aboriginals into the ‘superior’ western lifestyle of the white people would be possible (Aboriginal Rights – EmbraceAustralia. com). Many strongly believed in this policy for the “protection of future generations”, not knowing that they would end up with the ‘stolen generations’ of all the assimilated indigenous children (Armitage). Prejudices, Government Policies and non-existent legal rights are just a few of the methods of oppression the Aborigines have faced.

The very first method of oppression against the Aboriginals was the removal of their ownership of land and properties, when the white settlement first began. This lead up to the abuse of aboriginal labour and poor working conditions. The effort to ‘protect’ and ‘integrate’ natives into white society with the Assimilation Policy during the mid 1800’s is possibly one of the most severe methods of oppression used in this issue. Even throughout the First World War, Aboriginals were banned from joining the army to fight for their rightful homeland .

The Australian Government did not have many Aboriginal Rights until the 60’s and 70’s. Before 1962, Indigenous natives did not have the right to vote and four years later, in 1966, poor working conditions that applied solemnly to the aborigines were finally protested and acknowledged. It was not until 1967 that the Commonwealth Referendum obtained permission to create new laws and rights regarding indigenous people. Some even believe, although highly doubtful, that the spread of new diseases by the Europeans was an attempt at potential genocide towards the natives.

This method is still often debated (Aboriginal Rights – EmbraceAustralia. com). Lest we forget, that along with all of these events during the years of Aboriginal oppression the natives were, and still are, associated with many false and insensitive racist prejudices. More recently, only in 2008, an official apology was finally released by Australia’s then Prime Minister, Kevin Rudd. PM Rudd gave a four minute apology followed by a 20 minute speech recounting many events and stories of victims.

The apology was addressed to all aborigines and most importantly, the stolen generations. To the mothers and fathers, the brothers and sisters, for the breaking up of families and communities, we say sorry. And for the indignity and degradation thus inflicted upon a proud people and proud culture, we say sorry. ” Mr. Rudd finished his speech with this closing statement before receiving a standing ovation (New York Times, Johnson). Although this apology demonstrates how most of Australia is ready to continue evolving and move on from all the oppression, a study conducted in 2008 found that “Australians in general are welcoming of diversity, but some 1 in 10 Australians still hold racist views”.

The results of that study illustrate how oppression and racism, although tremendously improved, will most likely always be present in Australia’s society (Racism in Australia, Shah. Though the journey has not been easy, the proud aboriginal natives of Australia now have a tale to tell about their fight against oppression lasting two centuries. As they reencounter their battles against small pox epidemics and for land and rights, they will not be remembering their pains and sufferings, but celebrating their strength and determination to have overcome this mogul in Australian history.

A History of Oppression: the Mistreatment of Australian Aboriginals. (2016, Oct 28). Retrieved from https://studymoose.com/a-history-of-oppression-the-mistreatment-of-australian-aboriginals-essay 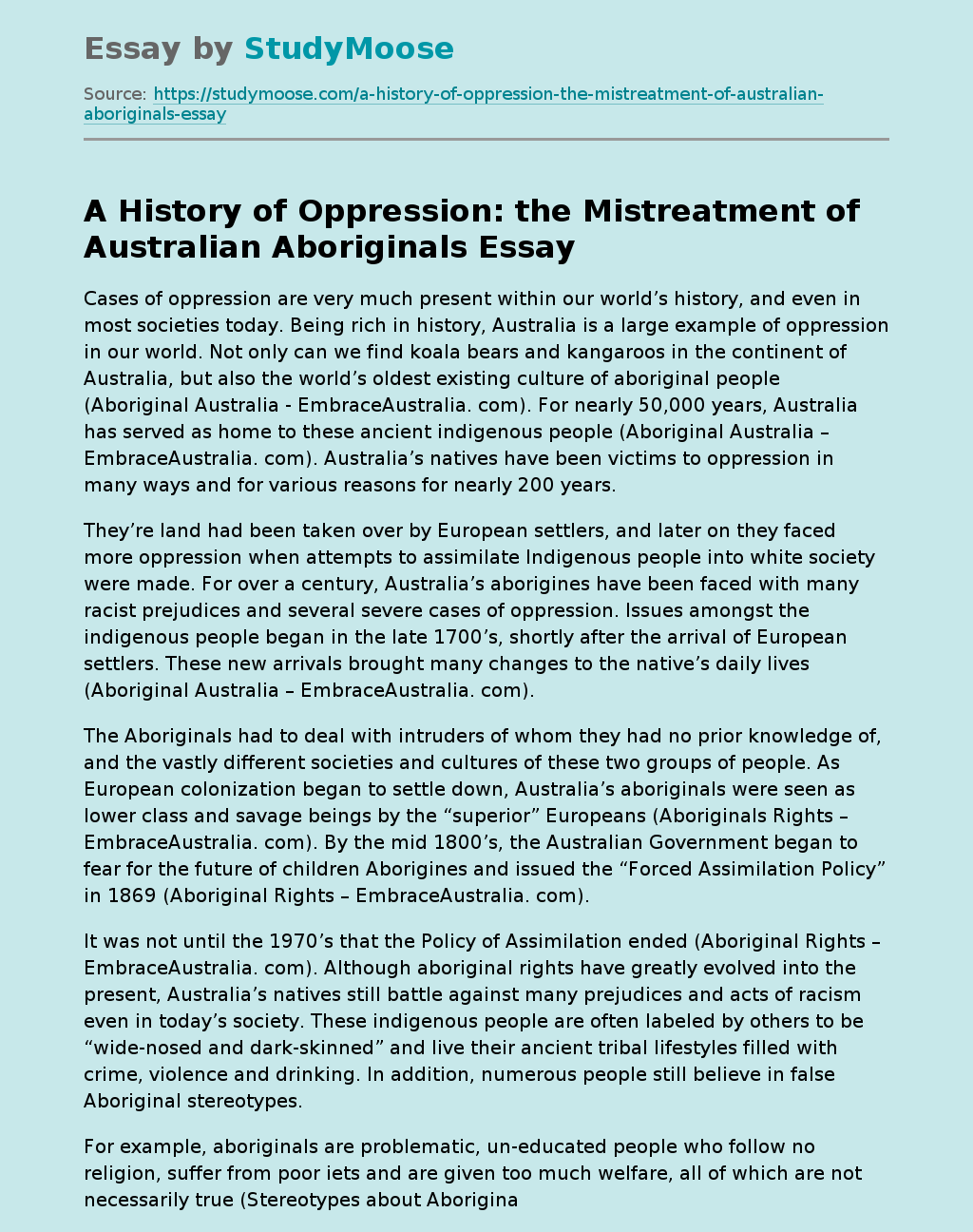