A General Introduction to Folk Customs

Folk customs: a definition Folk customs, or folk ways, comprise the part of cultural life that people of a country or nation have created, practiced and transmitted in their endeavors to satisfy their needs at various stages of their history and society. Deep-rooted in the cultural life of a community, folk customs are passed down from generation to generation in a temporal dimension and spread from one place to another in a spatial dimension. In the history of human society, folk customs have evolved from naught to existence, from simple to complex.

Don't use plagiarized sources. Get your custom essay on
“ A General Introduction to Folk Customs ”
Get custom paper
NEW! smart matching with writer

In primitive society, a common folk custom was to eat animal flesh raw and drink its blood and to live in caves or hollows. With the development of society, the material life, the related organizational forms of social life, wedding ceremonies, funerals, and etiquettes came into being, and by and by they are established as folkways, or folk customs. In China, for instance, chopsticks are used at meals, which is a Chinese folk custom.

Northerners eating jiaozi and southerners eating rice cakes in Chinese New Year Festival, all people eating moon-cakes on Mid-Autumn Day and greeting each other with “Have you eaten? are all Chinese folk customs. Folk customs are shared and practiced by members of a nation in their daily life. There are folk customs governing the daily life of people, traditional festivals, various stages of life, as well as ideological aspects of social life. The various taboos in life are highly ideological. For example, the taboo against sweeping the floor from December 30 to January 2 on the Chinese lunar calendar resulted from the folk belief that this would affect the luck of wealth in the coming year.

Some folk customs, as they originated from religious beliefs, carry a strong religious flavor by laying down rules for marriages, wedding funerals, and diet of believers. Every nation has some folk customs, ways of life or national styles that distinguish itself from other nations. People of that nation have a strong affection for these distinctive ways and recognize them as national symbols. Prevalent in a society with people hardly knowing them, folk customs apply to such matters as clothing, eating, living, transportation, decorum and etiquette, and manners of getting along with others.

In this sense, folk customs are basic forms of national culture that may directly reflect and influence the material and spiritual life of a country or nation. 2. Characteristics of folk customs 1. 2. 1 Collectiveness The birth and transmission of folk customs is both social and collective. From the very beginning, their creation and development involve the participation of a group and reflect the mentality, linguistic and behavioral patterns of that group. For instance, the wedding ceremony is an activity attended by members of a particular group, as the would-be couple need win social recognition through this ceremony. . 2. 2 Regionality Geographical surroundings exert a strong influence over human life, thus the regionality of folk customs. Take for example the Mongolians in northern China. They used to be a nomadic people, and now animal husbandry is still their major concern, for the reason that the chief regions they inhabit are more suitable for animal husbandry in terms of natural resources. The Hezhen people use dog-sledges and go for hunting and fishing, and the Oroqen people go hunting on horseback, all for the sake of their geographical surroundings. 1. 2. Transmissiveness and disseminativeness Folk customs are established through passing down from one generation to the next; they exist and disseminate in a certain area. The earlier they were created and the stronger functions they perform, the more areas the folk customs are disseminated to. The practice of giving New Year money to the young generation, for example, has been observed in all places year after year. 1. 2. 4 Relative stability and variability Once established, folk customs will become a stable part of life. The more stable a society, the more stable its folk customs.

However, folk customs are liable to change with the development of society. Take for example the Chinese wedding ceremony. In the past, the Han people used jiaozi (old-fashioned sedan chair) to take the bride from her childhood home to the bridegroom’s house, but now they use cars. Stability contributes to the preservation of folk customs, and variability to their development. 3. Classification of Folk Customs Folk customs are numerous and complicated, and are developing day by day. It is universally acknowledged among researchers that folk customs fall into the following eight categories. . 3. 1 Folk customs of production Folk customs of production grow out of various production activities, including agriculture, forestry, animal husbandry, fishing, handicraft industry, service industry, etc. In the history of human beings, these customs have played a role in ensuring production efficiency.

A General Introduction to Folk Customs. (2018, Sep 05). Retrieved from https://studymoose.com/a-general-introduction-to-folk-customs-essay 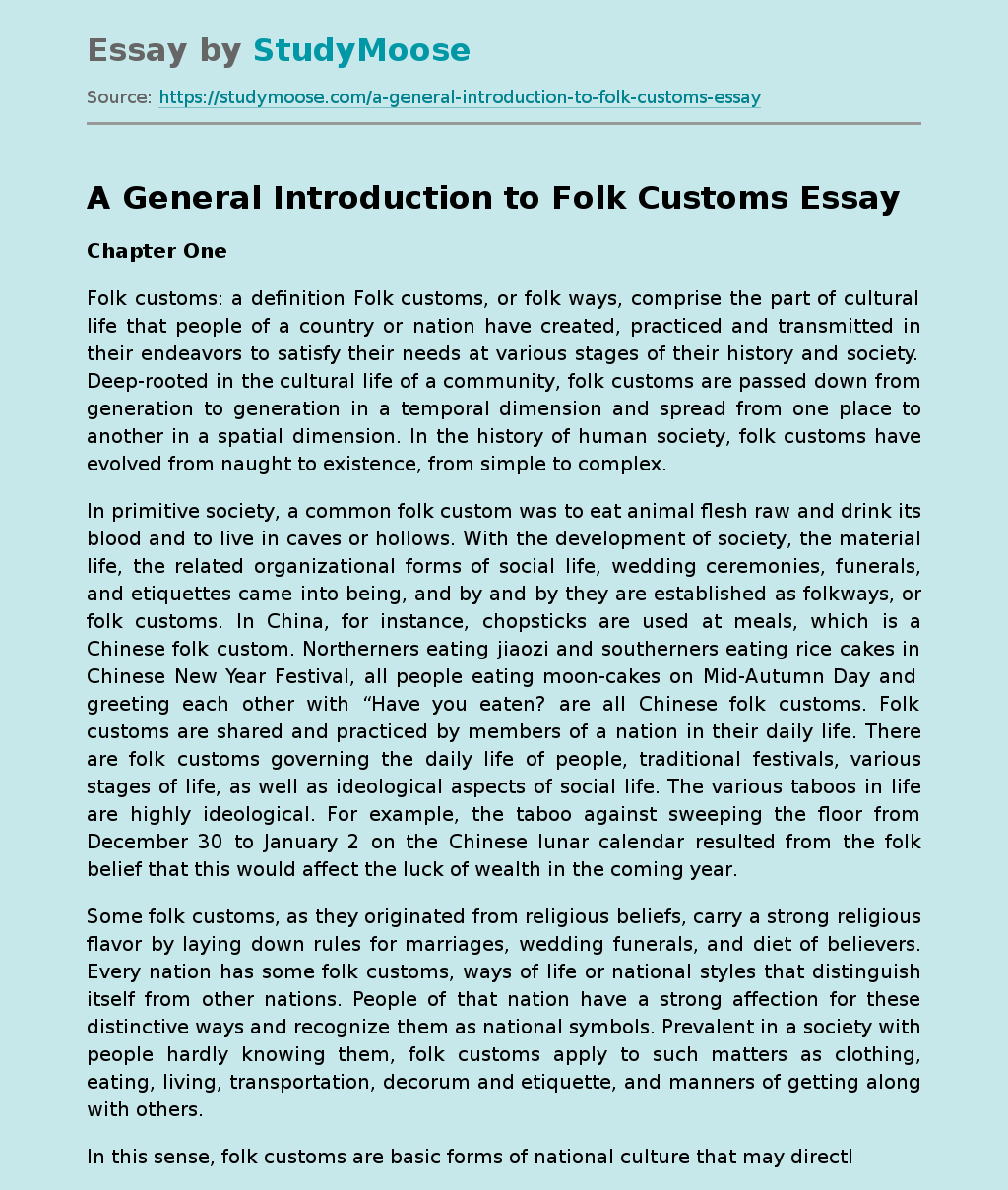