A Face Can Hide A Secret

Through chapters 1-11, there was a lot of prejudice occurring in the chapters. Often, the people in Maycomb would assume about a person, by the way they look or the rumors that they hear about that person. Like, Mrs. Dubose, she often appeared as a horrible and rude person, but she was a morphine addict that was dying, and that caused her to be rude to Jem and Scout. We shouldn’t judge someone before you even get to know the person, because you can never know everything about someone just by looking at them, they might have something bad going on at home which leads them to a bad mood, and you should always try to understand the person and help make their day better.

Don't use plagiarized sources. Get your custom essay on
“ A Face Can Hide A Secret ”
Get custom paper
NEW! smart matching with writer

I disliked how everybody had to live in a certain way and if you didn’t act the way other people did people would look down on you. Like, Scout she did not want to act like a female, she wanted to be more like a male, and spend time with males. She did not like to wear dresses, she liked to wear pants and shirts, but the people in Maycomb looked down at her and said that she must be more like a girl, and she must wear dresses and spend more time with females.

They are basically forcing her to be someone who she is not, Scout has her own way of how she wants to live her life, and if Atticus doesn’t have a problem why should anybody else have a problem. She doesn’t have to be someone who she is not. There were also, religious prejudice, in the novel, an example of this was when a foot washer told Miss.Maudie that she spends too much time outside and that she should go inside and read the bible and that her and her flowers were going to go to hell.

In my opinion, I find that prejudice because the foot washer assumed that she is not a religious person and that she doesn’t read the bible, but the foot washer knew nothing about her, he assumed about her without fully getting to know her. Another example of prejudice in this novel, was when Walter Cunningham came to Scout’s house. She was talking about him to Calpurnia, and she told Scout that he is a guest and he should be treated nicely, then she said that he was just a Cunningham. She assumed that just because she is a Cunningham, he must be treated as if he isn’t human and he has no feelings, nobody should be judge by where they come from. Just because his family is poor and they can’t afford many things doesn’t mean he should be treated like trash.

There is also religious prejudice, in the novel, white people are more superior than black people, so black people must work on harder jobs and they don’t get paid as high as white people. But Atticus tries to solve this problem of discrimination of color, by defending a black man, but there is also some negativity that comes out of defending a black man. Like Atticus and his kids are treated differently, and a lot of people taunt Scout saying that her dad is a “nigger lover”, and that her dad is trash.

Even Atticus’s family are going against him because he is defending a black man. This shows how racist they are, and how they treat black people like they are nothing. They think that just black people look different, that means that deserved to be treated like they are not humans, but they are human too and they deserve to get treated like everybody else. In conclusion, Maycomb is a place where if you are not like everybody else or you don’t look everybody else you are treated lowly and like you are nothing. Which makes no sense, because if everybody looks alike and acts the same, then it will be boring and the same old thing and there will be no sense of diversity.

I think that the people in Maycomb, should be more accepting and kind to one another because as I stated earlier everybody has their own aspects on how they view life. Here is a quote from the book “You can never understand a person until you consider things from his point of view”- Atticus, page 39. This mean that you can never fully get to know someone until you understand why they choose to act a certain way. So, never judge someone by the way looks or the way they act, get to know the person and understand them before you make an assumption about them.

EXAMPLES OF PREJUIDICE IN THE NOVEL: 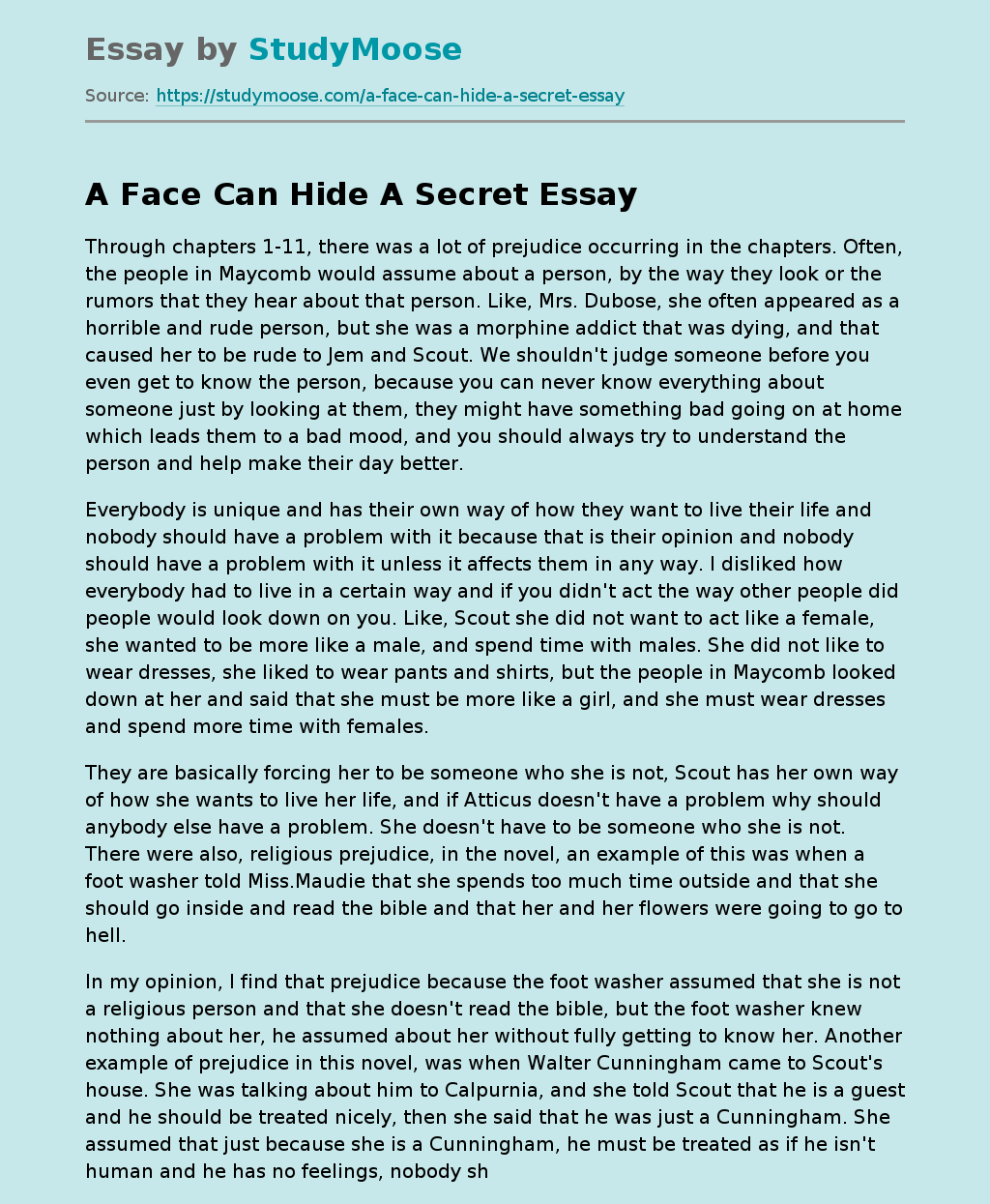