"A Doll's House" by Katherine Mansfield

“The Doll’s House” is one of the representative stories of Katherine Mansfield. Who is known for freshness of her approach and beautifully colored methods of presenting her ideas. The story basically gives us deep insight into the manners and behaviors of the aristocratic families. Here she ridicules the negative philosophy of social discrimination caused by uneven division of wealth. It beautifully brings out the emotional relationship between the three sisters and their friends. Moreover, it conveys an idea that parents attitude influence their children and deprive them of their natural goodness.

Don't use plagiarized sources. Get your custom essay on
“ “A Doll’s House” by Katherine Mansfield ”
Get custom paper
NEW! smart matching with writer

In short in life-like manner Katherine tells us the hidden vices people belonging to higher society.

From the very outset of the story we see that the girls of Burnell’s family received a beautiful doll’s house from Mrs. Hay. It was a charming house having a drawing room, a dinning-room, a kitchen and two bedrooms. All the rooms had tables, chairs, beds and carpets.

The rooms were painted in different colors however Kezia liked the lamp very much, which was placed in the dinning-room.

The girls were very excited and wanted to show it to their friends. So the next morning they rushed towards the school but the bell had rung and they could not disclose it to the girls. However, at the playtime, Isabel finally disclosed the news of the house, which spread like wild fire.

If was decided that two girls would see the house at one time. All the girls got an opportunity to see the doll’s house, except the Kelvey sisters, as they belonged to a poor family.

So everybody teased them. Being the daughter of washerwoman and jailbird, they were victim of the inferiority complex. However Kezia wanted then to see the house, so she asked her mother for permission but was harshly scolded. One day she saw the girls passing by the house. As the family was upstairs, she invited them to see the house. They Kelveys could not believe but stepped into the courtyard, as they naturally wanted to see it. Suddenly aunt Beryl’s came there and ordered them to leave the house in an insulting manner. They Kelveys ran away from there with the feeling of shame but they were happy to have seen the house.

In the end, we can say that the writer has beautifully shown the attitude of the rich against the poor. It is the parents who are responsible for creating inequality in society. Children such as Kezia are scolded because they are innocent and cannot see the difference between the rich and poor.

"A Doll's House" by Katherine Mansfield. (2016, Jun 19). Retrieved from https://studymoose.com/a-dolls-house-by-katherine-mansfield-essay 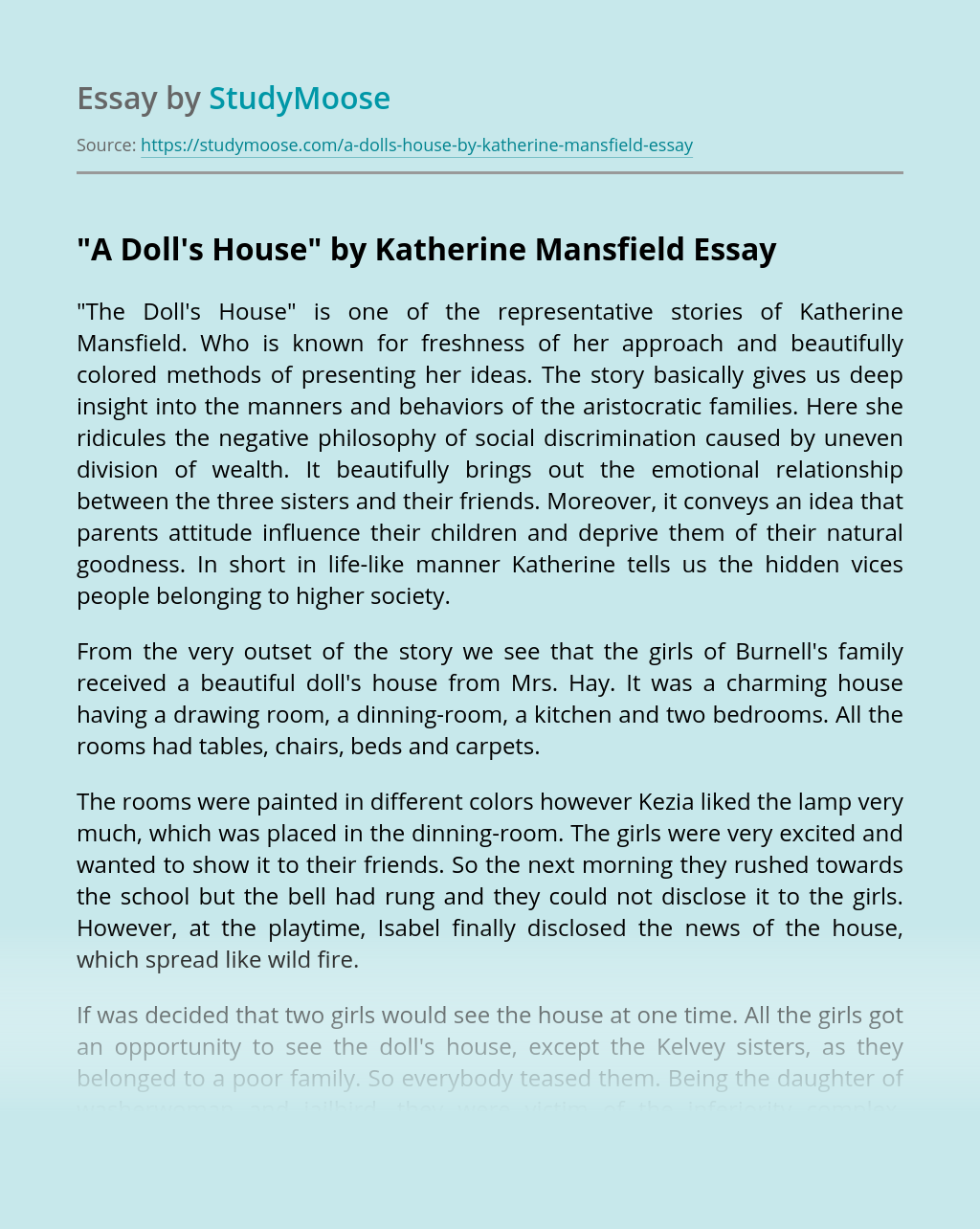