The reason why I chose to write about of A Dog’s Death, is because it reminds me of a dog that I had growing up. Whenever the dog got sick my brothers, sisters and I would always think the worst about what happened to him when he got sick. Since we lived in the country on farm land there was always the possibility that he may have gotten hit by a car, bitten by a snake, or poisoned by neighbors that didn’t like him.

Turn in your highest-quality paper
Get a qualified writer to help you with
“ A Dog’s Death Analysis ”
Get high-quality paper
NEW! AI matching with writers

In John Updike’s poem, “Dog’s Death”, the dog who dies in the poem and her owner expresses a sense of abandonment which illustrates the mourning of one who loses their dog.

I think the approach for analyzing this poem will best fit for reflecting the imagination, tone, image, and similarly designed to reveal the tone I observed in the poem. The theme of “Dog’s Death” is based on the life and death of a family dog.

When the author, John Updike starts at the beginning explaining how the dog might have gotten the fatal injury. This short paper will discuss the dog’s death as a theme for this short story. The beginning talks of the fatal injury that might have brought this family pet to her demise. The family thinks that she must have been kicked unseen or brushed by a car (Updike, Clugston, 2010).

Imagination comes into play by speaking of the dog learning to use the potty on the newspaper, and then again it could also be that the paper was put down on the floor because the dog was suffering from diarrhea and didn’t have a chance to go on the newspaper either.

It gives the reader a chance to think of a pet they once had and empathize with the writer about his dog dying (Clugston, 2010). The plot of the story is very similar to the theme of the story. The plot discusses the manner in which the dog dies, or the circumstances surrounding the dog’s death.

The family continues to play and go on as if nothing is wrong with her. As the children went to school that Monday morning, the dog went under the bed. As the children went off to school in their minds she was ok until they see her underneath the youngest child’s bed lying in a heap. Holding the dog in his lap on the in car, he was stroking and rubbing her warm fur. One can see the image in their mind of the writer touching and looking at his pet using all of his senses of the dog lying in his lap dying (Clugston, 2010 pg. 2. 5).

When the wife called out to her husband in tears one can feel the pain in the reading of the poem, especially one that has lost a pet. In an attempt to show a sign of life, the dog attempts to bite the hand of the owner that is caring for and holding the dog on the way to the vet’s office, but instead the dog dies. “In the poem, a young unnamed dog is just learning to be “good,” which the Speaker associates in particular with being house-trained: “She was beginning to learn/ to use the newspapers spread on the kitchen floor and to win, wetting there, the words,” Good dog! Good dog!

The “shy malaise” that the speaker initially attributes to a shot reaction but turns out to be a ruptured liver is characterized as “her heart learning to lie down forever. ” This last command is from nature rather than culture, however, and the poem frames the final moment of the dog’s death as the final contest between these two forces: the dog is ultimately disobedient, showing her untamed side by biting the speaker and by failing to heed the “imperious,” commanding tone of the speaker’s wife, who tries to call the dog back as she is dying, slipping from the realm of culture into that of nature. ”

The beginning of this story seems to be telling you about the dog learning to use the newspaper to go to the bathroom, but the actual message is the dog’s death. The very last part of the story talks of the dog not making it to the newspaper when the dog was nearing her death. In my criticism of the poem, this story could have given the reader more background of the story.

What we do know is that she could have been kicked or brushed by a car is not enough information to really tell us what really happened to her. Besides the fact she had a ruptured liver. How did this happen? It could have been much more personal if the dog had a name in the story, as the only thing that brings the dog to reality is the fact that we are given the fact that she is a girl, there were children in the home, and the wife comforted her on the way to the vet. 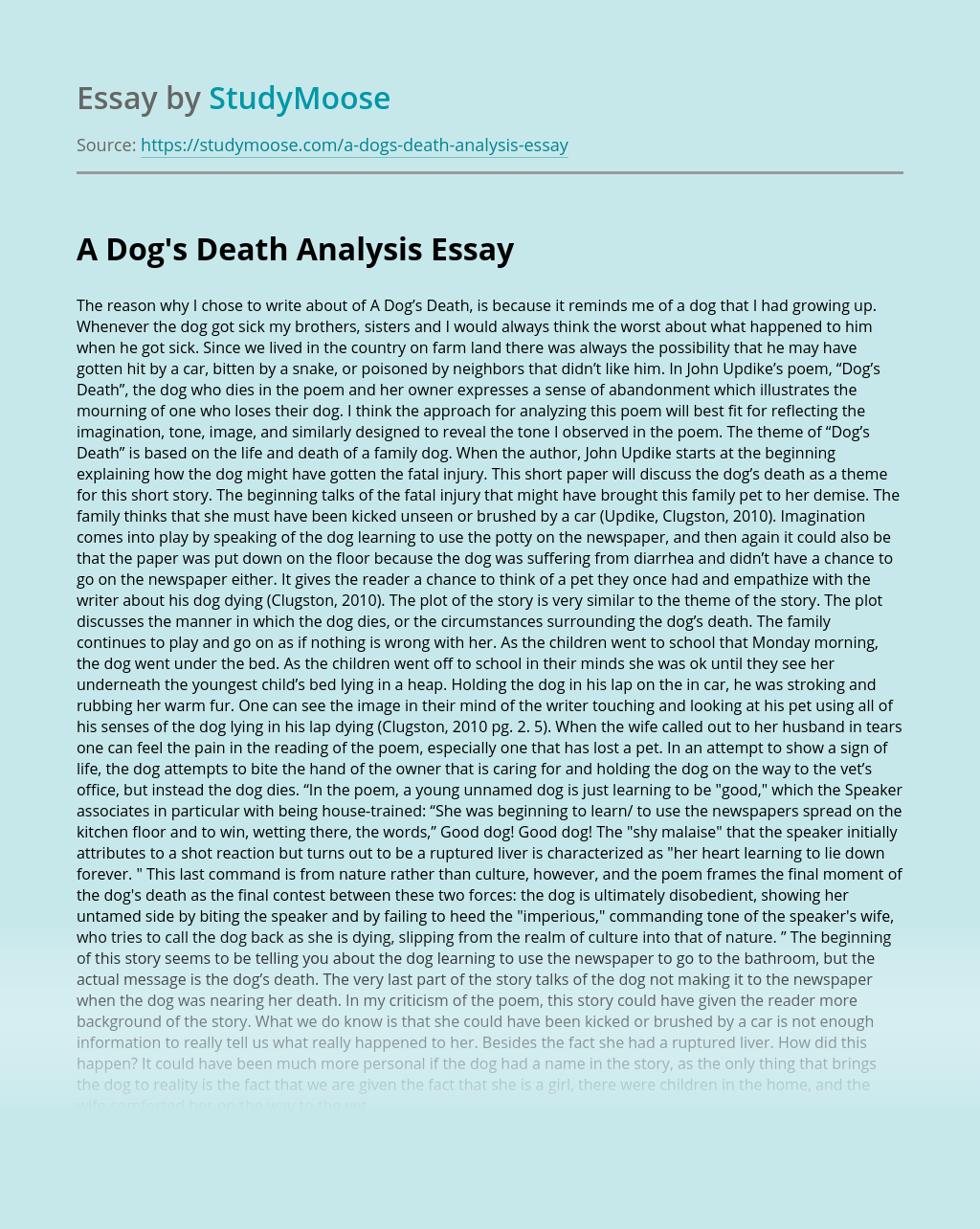 Turn in your highest-quality paper
Get a qualified writer to help you with
“ A Dog’s Death Analysis ”
Get high-quality paper
Helping students since 2015
Stay Safe, Stay Original