A Divine Image: a Direct Contrast to the Humanitarian Idealism

In his 1932 article, “An Interpretation of Blake’s “‘A Divine Image,'” Stephen Larrabee views the entire poem as a direct contrast to the “humanitarian idealism” (307) of “The Divine Image,” with the author making direct line-by-line comparisons of the two. Not until 1959, however, does a critic actually examine Blake’s “virtues of delight.” In his The Piper & the Bard: A Study of William Blake, Robert Gleckner traces the psychological roots of each of those virtues, while asserting that Mercy, Pity, and Peace are each a part of, but distinct from, the fourth and greatest virtue – Love.

Don't use plagiarized sources. Get your custom essay on
“ A Divine Image: a Direct Contrast to the Humanitarian Idealism ”
Get custom paper
NEW! smart matching with writer

Gleckner finally affirms the “human form divine” as a composite of all of the four virtues. Gleckner returns in 1961 with a comparison between “The Divine Image” and “The Human Abstract.” While primarily concerned with “The Human Abstract,” Gleckner does position the unity of humanity and divinity in the four virtues of “The Divine Image” against the fall into fragmentation of the later poem.

Another comparison between “The Divine Image” and “The Human Abstract” occurs in Harold Bloom’s 1963 text, Blake’s Apocalypse: A Study in Poetic Argument. Here, Bloom asserts the deliberate incompleteness of “The Divine Image” by arguing that its God is a “monster of abstractions, formed out of the supposedly human element in each of Innocence’s four prime virtues” (41). Bloom continues by exploring the changes in the virtues from one poem to the other, finally exposing them as “founded upon the exploiting selfishness of natural man” (143).

“The Divine Image” receives due critical recognition for the first time in 1964, when E. D. Hirsch asserts the centrality of the poem to the Songs of Innocence and of Experience by proposing as its theme the divinity of humanity and the humanity of divinity.

Hirsch theorizes that Blake’s choice of virtues reveals his identification with God the Son (the New Testament God) over God the Father (the Old Testament God). In his 1967 discussion of the Songs of Innocence and of Experience, Sir Geoffrey Keynes concerns himself primarily with the plate of “The Divine Image.” Keynes first affirms the theme of the poem as “the identification of man with God” (Plate 18), and he then continues by arguing that the decoration on the plate – “a strange flame-like growth, half vegetable and half fire” (Plate 18) – is a symbol of human life. Meanwhile, David J. Smith returns to a comparison between “The Divine Image” and “A Divine Image” in a 1967 article entitled, appropriately enough, “Blake’s ‘The Divine Image.'” According to Smith, the less definite “A” in the title “A Divine Image” allows him to compare that poem’s remotely situated God with the immanent God of “The Divine Image.”

Smith continues by placing the poetic speaker of “The Divine Image” in a state of innocence, thus explaining the “simplistic” unity of the virtues in the poem. John Holloway enters the critical discussion concerning “The Divine Image” in his 1968 text, Blake: The Lyric Poetry. In his rather straight, new-critical reading of Blake’s poems, Holloway compares the diction and meter of “The Divine Image” with that of hymns of the period. Holloway asserts that the poem contains no visionary quality because it is too neatly constructed – and because that neat construction invites a retort by the reader. Eben Bass’s 1970 article, “Songs of Innocence and of Experience: The Thrust of Design,” contains a narrow discussion of the relationship between the reversed “S” curve of the flame-plant in the plate of “The Divine Image” and Blake’s dramatization of the “two contrary states” of humanity. Robert Gleckner returns to the critical conversation in 1977 with his note concerning “Blake and the Four Daughters of God.”

In this brief article, Gleckner argues that the allegory of the Four Daughters of God may be a source for Blake’s four virtues in “The Divine Image.” Gleckner continues by positing that Blake’s replacement of two of the “daughters” – Truth and Justice – with the virtues of Pity and Love might reveal his affirmation of the unity of divinity and humanity, for Truth and Justice may be viewed as Old Testament moral virtues that are bypassed by the New Testament Christ. Zachary Leader approaches the plate of “The Divine Image” from a different angle when he asserts in 1981 that the plate reinforces the poem’s theme (God as both transcendent and immanent) by positioning a Christ figure at the plate’s bottom (Earth) and angelic figures at the plate’s top (Heaven). Leader argues that the abstract quality of the poem reflects Blake’s dilemma in dealing with the qualities of an abstract God. Heather Glen’s thorough examination of “The Divine Image” in her 1983 work, Vision and Disenchantment: Blake’s Songs and Wordsworth’s Lyrical Ballads, posits Blake’s poem as an “exploration of the dynamics of prayer” (150) by comparing it with Alexander Pope’s “The Universal Prayer.”

Glen demonstrates the similarities between the structure of “The Divine Image” and the structure of a scientific experiment. She then proves that the poem moves from the abstraction of the four virtues to their embodiment in the human form divine. Finally, Glen reveals the two-edged nature of the virtues of Mercy and Pity by arguing that each contains a presumption of inequality within itself (an argument somewhat similar to that made by Bloom in Blake’s Apocalypse). Stanley Gardner briefly notes the plate of “The Divine Image” in his 1986 text, Blake’s Innocence and Experience Retraced.

Gardner asserts that the design of the plate deals with the “ideal of reconciliation derived from the fulfillment of Christian compassion” (54). David Lindsay also concerns himself with the abstract virtues of “The Divine Image” in his 1989 work, Reading Blake’s Songs. Lindsay demonstrates the transforming power that “The Human Abstract” has upon the virtues of “The Divine Image” by asserting that the idolatry of the concepts of pity and mercy “propagates the suffering on which its idols thrive” (80).

Finally (and perhaps fittingly), E. P. Thompson positions “The Divine Image” as the “axle upon which the Songs of Innocence turn” (146) in his 1993 text, Witness against the Beast: William Blake and the Moral Law. Thompson continues by exposing the “egalitarian humanism” (153) that underlies “The Divine Image.” According to Thompson, the poem concerns not divine humanity, but human divinity. Thompson does assert (like Hirsch) that Blake emphasizes the humanity of God the Son over the divinity of God the Father, but he concludes by demonstrating that the poet does not elevate Christ above the rest of the moral creation that shares in the same divine essence.

A Divine Image: a Direct Contrast to the Humanitarian Idealism. (2017, Jan 21). Retrieved from https://studymoose.com/a-divine-image-a-direct-contrast-to-the-humanitarian-idealism-essay 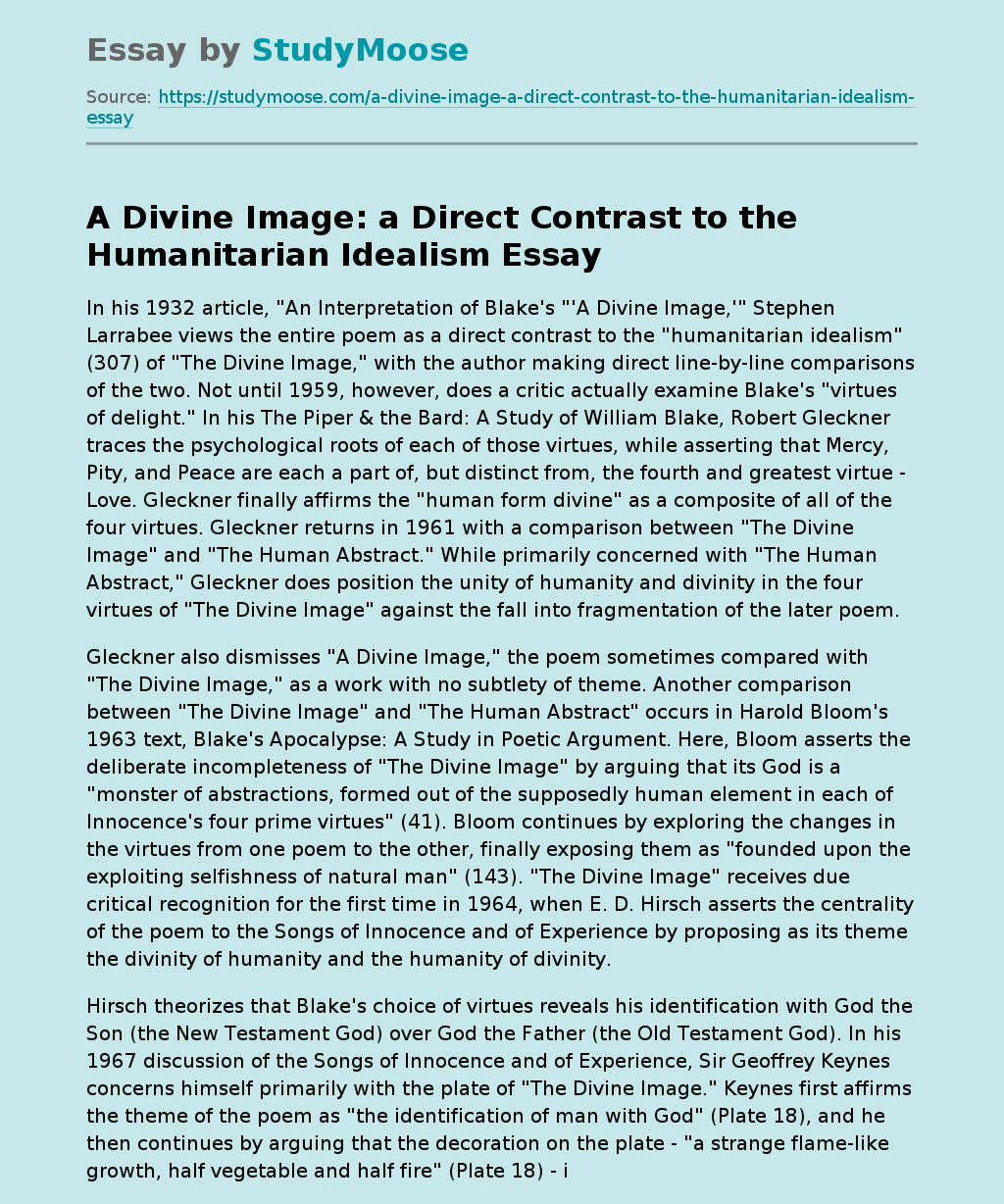