A Discussion: Hatshepsut or Cleopatra

Pharaonic and Ptolemaic Egypt were ruled by a “king,” and the Egyptian ideal of succession was from father to son (Shaw, 2003). The female relatives of the ruling king often played significant roles in the rule of Egypt, and the ideology of kingship itself was a careful blend of both male and female elements. Women who ruled autonomously as king were unusual in Dynastic Egypt, but it did occur; the best-known examples of this are Hatshepsut (from the 18th Dynasty) and Cleopatra VII (from the Ptolemaic period) (Tyldesley, 1995).

Don't use plagiarized sources. Get your custom essay on
“ A Discussion: Hatshepsut or Cleopatra ”
Get custom paper
NEW! smart matching with writer

Hatshepsut, the fifth ruler of the 18th Dynasty, was the daughter of Thutmose I and Queen Ahmose. After the death of her father, she married her half-brother, Thutmose II, who had a son, Thutmose III, by a minor wife. When Thutmose II died in 1479 B.C. his son, Thutmose III, underwent coronation. Due to the boy’s young age, Hatshepsut took the position of regent (Tyldesley, 1995). Hatshepsut did not wait for her nephew to come of age and take power.

As a favourite daughter of a popular Pharaoh, and as a charismatic and beautiful lady in her own right, she command a following strong enough to take control. She ruled as regent until 1473, when she declared herself Pharaoh of Egypt (Tyldesley, 1995).

Hatshepsut, as a woman, had many obstacles to overcome. To have a female pharaoh was unprecedented and probably unheard of as well. There was always a threat of revolt, especially as her stepson came of age. Using propaganda and keen political skills, she overcame each obstruction.

She dressed in the traditional male garb of rulers and the false beard. Hatshepsut administered affairs of the nation with the full support of the high priest of Amon and other officials. To calm the fears of a mostly illiterate populous and to create the illusion of maat, she provided material proof of her reign by becoming a “king” in all statuary and relief (Lecture notes, 2214).

Unlike the warlike temper of the rest of her dynasty, Hatshepsut was devoted to administration and the encouragement of commerce. In 1493 B.C., she sent a fleet of ships from Kosseir, on the Red Sea, to the Land of Punt, near present-day Somalia (Tyldesley, 1995). This was primarily a trading expedition, as Punt produced myrrh, frankincense, and fragrant ointments that the Egyptians used for religious purposes and cosmetics.

Hatshepsut’s rein came at the beginning of the period of Egyptian history known as the New Kingdom. Hatshepsut ruled for about twenty years, until her death in 1458 BC, when Thutmose III, wishing to reclaim the throne, led a revolt (Tyldesley, 1995). She left Egypt at the high point of the dynasty, with flourishing trade and wealth. Hatshepsut left behind more monuments and works of art than any Egyptian queen to come. This was a period of peace and stability between the campaigns of her husband and stepson.

When Cleopatra VII ascended the throne, she was only seventeen. Cleopatra married her brother and co-ruler, Ptolemy XIII, but Ptolemy was Pharaoh in name only. For three years, Cleopatra ruled alone while he remained in the background. Ptolemy’s advisors resented Cleopatra’s independence, and in 48 BC, they stripped Cleopatra of her power, forcing her into exile in Syria. Pompey was vying with Caesar for the Roman Empire, and he sailed to Alexandria after losing the battle of Pharsalos to seek Ptolemy’s protection. Ptolemy’s advisors sided with Caesar. When Pompey arrived, the Pharaoh watched as he was stabbed (Dunn, Jimmy; 2002). Caesar was appalled the brutal murder of a man who had once been his friend. He marched into the city and seized control of the palace.

Ptolemy and Cleopatra were to dismiss their armies and meet with Caesar, to settle their dispute. Cleopatra had herself smuggled to Caesar inside an oriental rug and seduced him. Caesar had Ptolemy arrested. The pharaoh’s army laid to siege the palace. Caesar released Ptolemy XIII and the Alexandrian War continued for six months until Ptolemy XIII drowned in the Nile while trying to flee a battle (Shaw, Ian; 2003). Alexandria surrendered to Caesar who restored Cleopatra to her throne. She reigned as Queen and Pharaoh between 51 and 30 BC, and died at the age of 39 (Dunn, Jimmy; 2002).

The Roman Empire threatened Egypt with conquest during Cleopatra’s reign. In both of her alliances, she joined forces with powerful men who ruled in Rome to assure a place for Egypt in the shaping of the Empire. The beauty of Cleopatra is legendary and yet history does not record whether she was dark or fair, tall or short. She, like Hatshepsut, was an ambitious Queen but “having swayed the rod of empire” she was to die with her ambitions unfulfilled. Perhaps the most eloquent epitaph to Cleopatra was that of her waiting-maid. “How did she die?” asked a Roman officer. “Right well” replied the maid “and worthily of the descendant of a line of kings.” (Hanna, Adel; 2000)

Since her death, Cleopatra has been described in conflicting ways–charming, greedy, a political equal to the Roman rulers, and a woman faithful in love, (Owen, Michael; 2000) but above all, she has been described. Little is known about Hatshepsut and Cleopatra has been immortalised as synonymous with Egypt itself. Cleopatra’s relationships with Julius Caesar and Mark Antony helped keep Egypt independent nearly twenty years. Therefore, if you believe this fame and scandal that has made Egypt famous to be of great importance to Egypt as a people and as a country then Cleopatra is without doubt the greater Egyptian queen.

However, Hatshepsut expanded Egypt’s borders and caused a period of economic prosperity in the twenty years she reigned. She demanded and won the right to be seen as equal among the pharaoh’s, and the right to the kingship of Egypt. This gave her, not only the status of a man, but also that of a god, and paved the way for Cleopatra’s rise to power. For this reason she can be seen as the queen who gave the most for her country and won respect in a highly male dominated society.

A Discussion: Hatshepsut or Cleopatra. (2016, Jun 28). Retrieved from https://studymoose.com/a-discussion-hatshepsut-or-cleopatra-essay 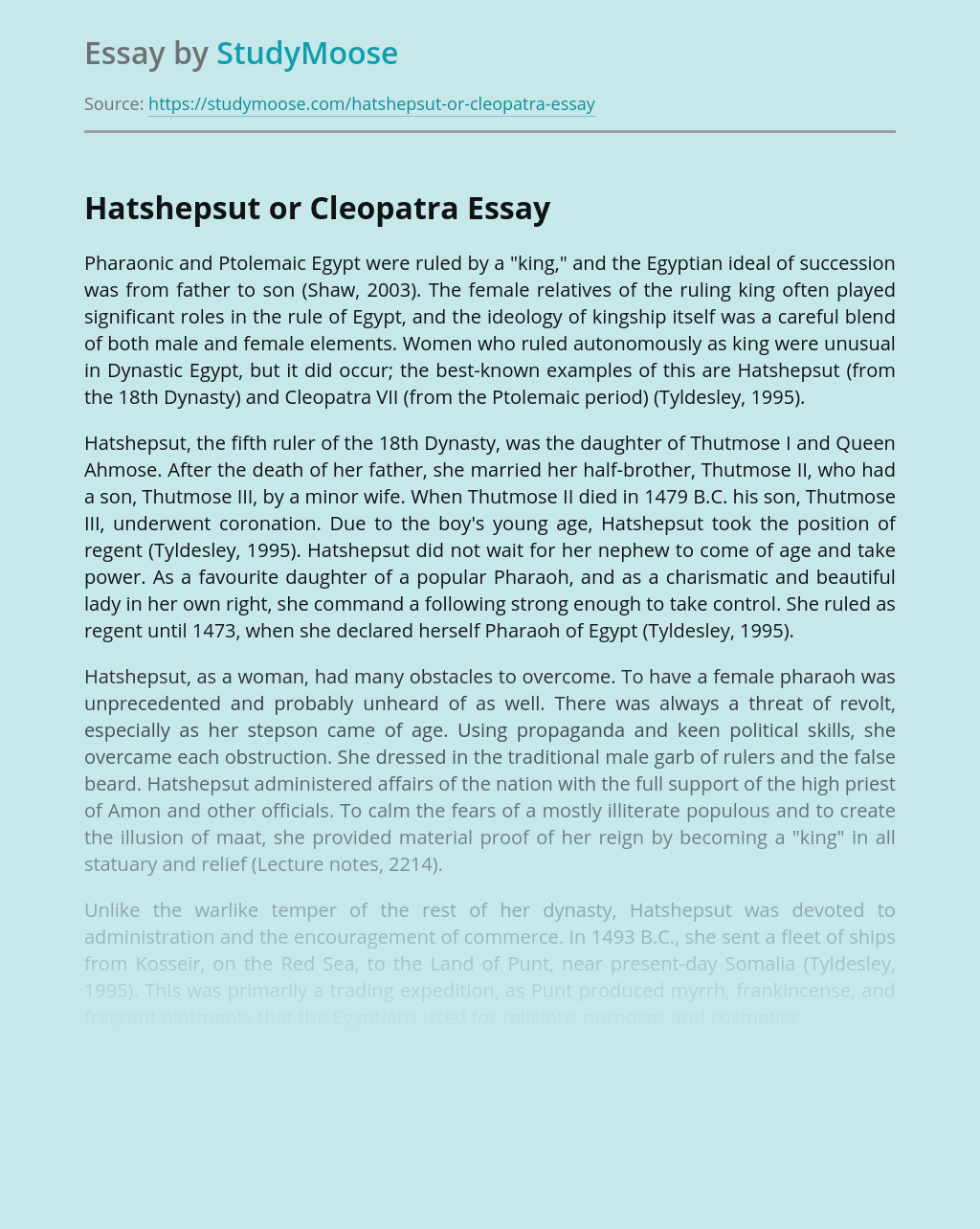