To What Extent Does the Nature of Language Illuminate Our Understanding of the Relation Between Knowledge of Ourselves and Knowledge of Others?

More than any other thing, the use of language sets humankind apart from the remainder of the animal kingdom. There is some debate as to where the actual boundary between language and communication should be drawn, however there seems to be no debate as to the nature of Language, which is to communicate, using abstract symbols, the workings of one mind to one or more others with a relatively high degree of accuracy.

Don't use plagiarized sources. Get your custom essay on
“ A Description of How An Individual Uses Language to Differentiate Himself From Others ”
Get custom paper
NEW! smart matching with writer

It could perhaps be said that we are all capable of expressing or representing our thoughts in a manner that is only meaningful to ourselves. Wittgenstein says that I..a wheel that can be turned though nothing else moves with it is not part of the mechanism. The idea of a uniquely personal language is not relevant here and so will not be discussed further.

Language is a system of symbols which represent thoughts, perceptions and a multitude of other mental events.

Although the meaning of a given word or expression is by no means fixed, there is a sufficiently high degree of consensus in most cases to ensure that our thoughts are to a great extent communicable. This essay will concentrate on two aspects of language. Firstly that it gives our own thoughts and those of others a certain degree of portability and secondly that because it has a firm (though not rigid) set of rules governing the relationships between symbols it allows what would otherwise be internal concepts that could not be generalised, to be made explicit, examined in detail and compared.

If we did not have language we would be able to surmise very little about other humans around us. Non-verbal communication has evolved to instantaneously communicate ones’ emotional state, and generally succeeds in this, however although it can reveal what a person may be feeling at a particular time, it says nothing about why those feelings are present and in any case is most reliable with strong emotions such as anger, fear, disgust &c. The less intense the emotion the more vaguely it is portrayed. If we are aware of the events preceeding the display of emotion we may be able to attribute a cause to it, but as psychologists Jones and Nisbett (1972) showed, these attributions are quite likely to be inaccurate due to the predilection that humans have for attributing behaviour to the disposition of the person being observed. In addition to all of this, non-verbal communication is limited to observers in the immediate area at the time of the behaviour.

In contrast to this, language allows us to group ideas and perceptions together and compare them in order to reach a high degree of consensus about their meaning. Wittgenstein says that You learned the concept ‘pain’ when you learned language. The portability that language imparts to thoughts and perceptions allows us to compare our own response to various experienced stimuli with anothers’ report of their response to a similar event which we may or may not have witnessed. Over time it becomes possible to discern certain trends and so, for example, the sensation that we feel when we strike our thumbs with a hammer, the characteristic Ipain behaviouri and such things as the anguish that people feel at the end of a romantic liaison all become part of the general concept of pain, even though they are all dissimilar in form (this point will be discussed subsequently). By using language humans can vicariously partake of the experiences of another (e.g. when one watches a play or a film or when one listens to an account of a friends experience.) In short, language allows us to make comparisons between our own thought processes and those of others which in turn enables us to infer that the subjective experience of others is in many cases similar to our own.

An important property of language is that it has rules governing the relationships between its’ constituent parts. Some of these rules are more rigid than others which gives the system considerable overall flexibility. For instance, there is a great difference between saying “You are not allowed to do it and You are allowed not to do it.”

This is a crude example but it makes the point that the meaning of an utterance depends upon more than just the words used. In addition an utterance may be meaningful, and grammatically valid and still be nonsense, For instance the sentence; An Elephant is a fish in wellingtons! The meaning of the sentence is perfectly clear and the rules of grammar have hopefully been obeyed, but the sentence itself is patently untrue.

The analysis of sense and meaning is carried out using Logic, the study of argument and inference. Logical analysis of an utterance can establish the validity, or non-validity of any assertions that it makes. To use the oft quoted example; All men are mortal and Socrates is a man. One may infer from these statements that Socrates is mortal, since there is no combination of circumstances in which they could simultaneously be true and Socrates immortal. One major contribution that logic makes to the understanding of the difference between ourselves and others is that it can identify assumptions that are commonly made when speaking of others. For instance, to continue the pain example, If one sees a person exhibiting pain behaviour one is apt to think; That person is in pain but it is impossible for one to actually know what they are feeling. To a greater or lesser degree one infers that the others’ actual experience mirrors ones’ own to the same degree that their behaviour does. In the same vein, if I see my best friend slip with a screwdriver for instance, and injure his hand, I could reasonably say that I know him to be in pain, given that long experience has not shown any great difference between his apparent response to injury and my own. However I could not make the same statement about myself with any real meaning for the simple reason that my own experience of pain transcends knowledge. In my own case it makes as much, or as little sense to say that I doubt that I am in pain as it does to say that I know that I am.

Language therefore can be said to be something of a two-edged sword when referring to an understanding of the differences between knowledge of the self and knowledge of another. One the one hand the ability to ask questions of the type; What do you mean by ..? can allow some insight into the thought processes underlying the behaviour of another. On the other hand an analysis of the differences between what is actually being said when a statement is made referring to another and the same statement made referring to oneself, can show that ultimately ones’ knowledge of oneself and ones’ knowledge of others are two fundamentally different things. Knowledge of self is based on priviliged information that, in the absence of telepathic communication, is only available to oneself. This does not mean to say that our knowledge of ourselves is either accurate or complete.

Human beings are generally highly proficient at self deception, nontheless a word, a sentence, a series of sentences can only be an approximation of the thoughts behind them, likewise when words impact upon our consciousness, they are subject to interpretation. The purpose of language is to communicate but as Huxley says; IBy its’ very nature every embodied spirit is doomed to suffer and enjoy in solitude. Sensations, feelings, insights, fancies – all these are private and, except through symbols and at second hand, incommunicable. We can pool information about experiences, but never the experiences themselves. From family to nation every human group is a society of island universes.

A Description of How An Individual Uses Language to Differentiate Himself From Others. (2021, Sep 11). Retrieved from https://studymoose.com/a-description-of-how-an-individual-uses-language-to-differentiate-himself-from-others-essay 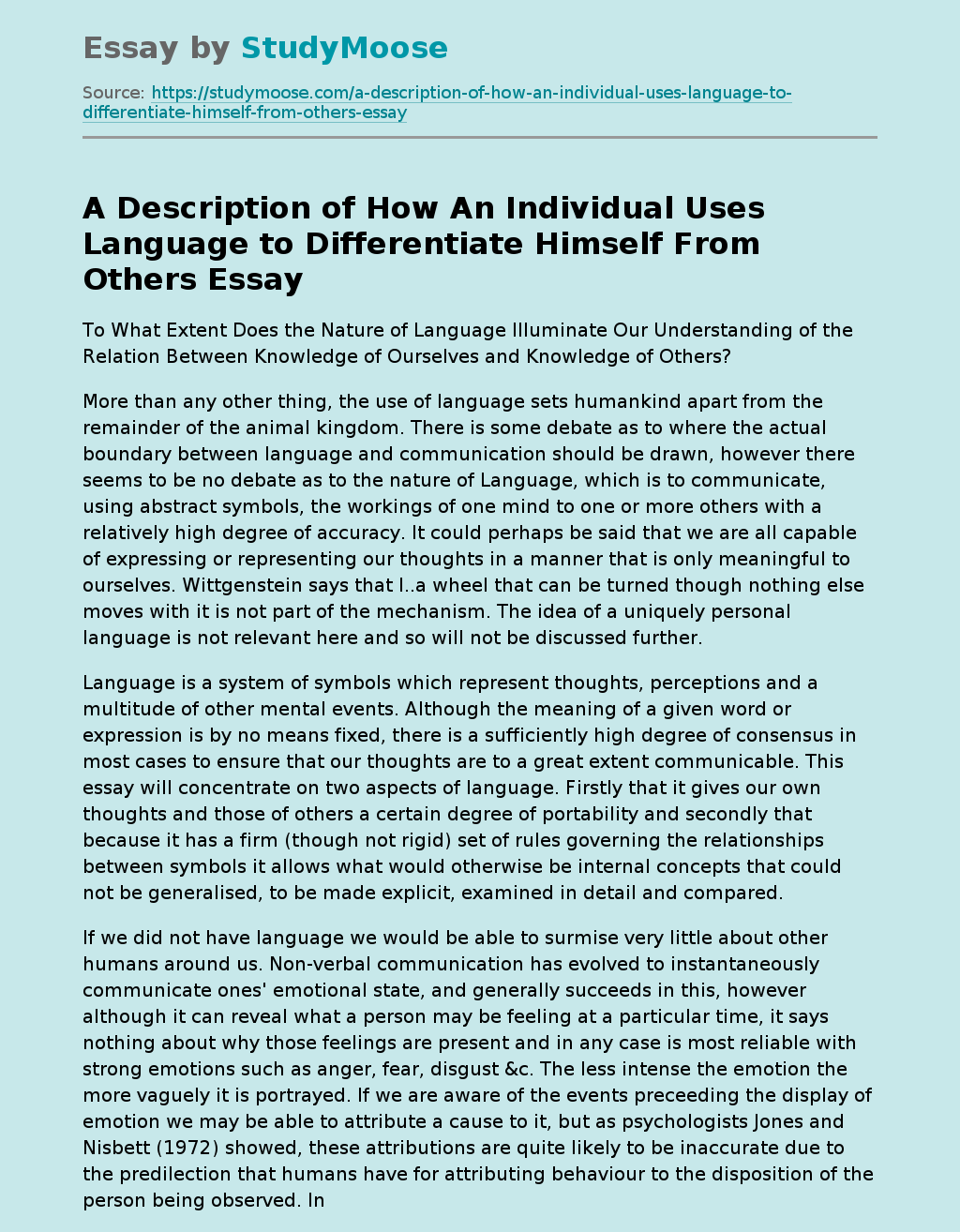