A Cultural Perspective of the Broadway Phenomenon

The purpose of this essay is to provide a cultural perspective of the workings that make up the equally reputable and infamous New York marvel that is Broadway. Through the analytical framework of the ASHME acronym, this paper will give a specific analysis to the Broadway phenomenon, which is explicitly a stage performance presented to an audience. Hamilton, a show dedicated to the incredible feats accomplished and mistakes made by the U.S. founding father Alexander Hamilton, will be our case for analysis and basis for exploring the mechanisms behind stage performance.

Don't use plagiarized sources. Get your custom essay on
“ A Cultural Perspective of the Broadway Phenomenon ”
Get custom paper
NEW! smart matching with writer

While not all Broadway shows are musicals, this show is and gives a different view than that of a play. First, it is best to explain briefly, what the acronym means.

The letter “A” refers to the acting party or the participants that engage in the activity. “S” is the setting in which the activity takes place, both literally and hypothetically. “H” is the history involved in the making of the activity or deep roots seen within the activity itself.

“M” would be the morals that the given activity would present, providing a larger cultural value. Last, is “E”, which is the ends or the purpose of the said activity. In this case, “A” would be literal Broadway equity actors, individuals paid to give their time and talent to the show. This also includes those behind the scenes; i.e. producers, composers, and stagehands. To be specific, Lin-Manuel Miranda headlined the show as the titular role of Alexander Hamilton when the show opened off-Broadway in February of 2015, and again when it opened in August of the same year at the Richard Rodgers Theatre.

“S” is the literal setting of the Richard Rodgers Theatre located on 46h Street, New York City. The show itself begins in the year 1776, New York City, with the Revolution on the verge of becoming a full out war. By this, the production uses costumes, sets, and props to portray the period. Eighteenth century fashion is represented as accurately as is allowed for a production run on hip-hop, and the set is minimal, enhanced by the richness of the story. The show itself takes a journey from the summer of 1776 through to the summer of 1804, with Hamilton’s death marking the climax of the show. “H” can pertain to the history behind the creation of the show as well as the history existing within the show.

Lin-Manuel Miranda created the show after finding inspiration in reading the Alexander Hamilton biography by Ron Chernow. It was not until 2009 that any form of the musical saw the light of day, however, when Miranda was invited to perform a sample of his Hamilton Mixtape—the initial title of the project—at the White House. It would then be many years until the show came to full production, in a workshop under the title The Hamilton Mixtape in 2013. As mentioned before, the show joined Broadway officially in 2015. “M” relates to the morals, reasons, motivations etcetera behind the show and those depicted within the show as well. Miranda’s motivation to write and embody Hamilton’s story was purely to give credit where credit was due.

Alexander Hamilton was a revolutionary in more than just his skill for battle strategy; he also developed a financial system in the early years of America as a free nation. He was also America’s first Secretary of the Treasury, even running for president in the election of 1800. Of all his accomplishments, Hamilton was similarly embroiled in scandal and died in a duel between himself and his running mate, Aaron Burr, whom with he had a continuing dispute. The morals presented in the show range dramatically; from the fight for freedom as a new nation, independent from British taxation, and the freedom granted that ought to have been to those in bondage, Hamilton explores the gritty struggle our founding men and women went through in order to ensure our liberty.

Remember that “E” is the ends, purpose, or goal that applies to the artifact and the performance. The show, nominated for a record-breaking sixteen Tony awards, won eleven of them. Since its opening on Broadway in 2015, Hamilton grossed over three hundred million dollars. This, however, was not the goal behind the effort and work put into the production. On more than one occasion, Miranda expresses a humility on the success of the production, though it is unmistakable feat accomplished for all involved. He explicitly states that he truly wanted to share Alexander Hamilton’s story, to show respect to the man’s brilliance, and to raise up a new generation of fearless freedom fighters.

The show holds a similar goal, to give testament to the triumphs and struggles of Hamilton and those in and surrounding Hamilton’s life. However, the musical leaves a visual and auditory imprint, and a poignant ends. Heavily portrayed in emotional and physical attributions, the show achieves a sense of the losses and successes felt in a beautiful narrative. This narrative holds the goal to leave a lasting impression on those watching and listening to the cast album. This objective was parallel, as said before, to Miranda’s goal. In conclusion, Hamilton brings to light a descriptive and moving performance that exercises the basis of the ASHME acronym. It is through this acronym that we can analyze many aspects of performative theatre, and can further delve into the workings behind the successes and failures to present a historically contextual show on Broadway. While Hamilton does take certain liberties, it is still thought to be the most poignant visual representation of Alexander Hamilton’s life to date.

A Cultural Perspective of the Broadway Phenomenon. (2021, Sep 15). Retrieved from https://studymoose.com/a-cultural-perspective-of-the-broadway-phenomenon-essay 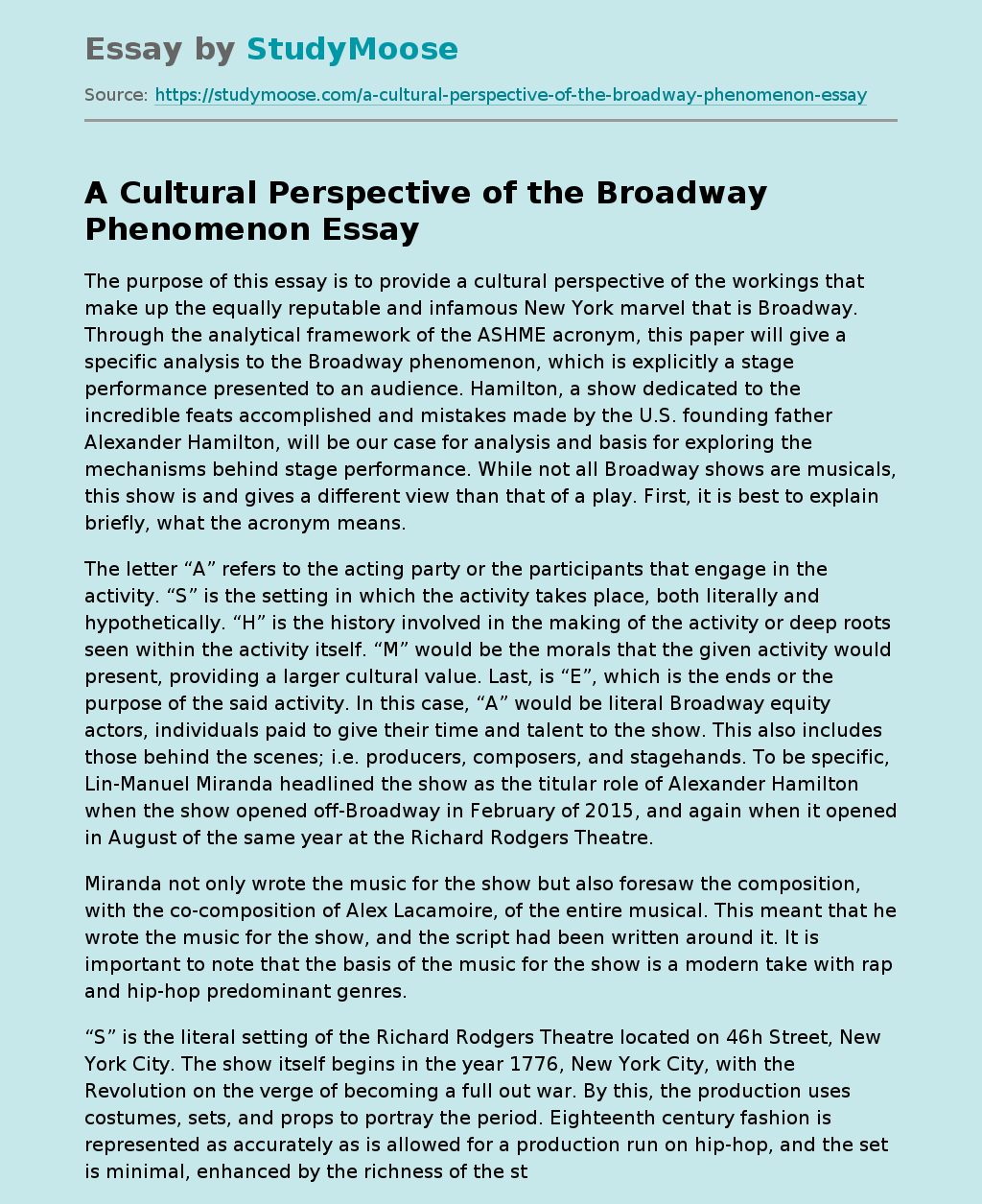