A Critique of Socrates' Guilt in the Apology

This paper provides a brief comment on the charge of Socrates being involved with “criminal meddling”. The paper is argued as a case of law.

A Brief Comment on the Query: “Is Socrates Guilty As Charged?” In any case of law, when one is considering truth and justice, one must first look at the validity of the court and of the entity of authority itself. In Socrates case, the situation is no different. One may be said to be guilty or not of any said crime, but the true measure of guilt or innocence is only as valid as the court structure to which it is subject to.

Don't use plagiarized sources. Get your custom essay on
“ A Critique of Socrates’ Guilt in the Apology ”
Get custom paper
NEW! smart matching with writer

Therefore, in considering whether Socrates is ‘guilty or not’, we must keep in mind the societal norms and standards of Athens at the time, and the legitimacy of his accusers and the validity of the crimes that he allegedly committed. Having said this, we must first look at the affidavit of the trial, what exactly Socrates was being accused with: “Socrates does injustice and is meddlesome, by investigating the things under the earth and the heavenly things, and by making the weaker speech the stronger, and by teaching others these same things.

He states that the reason behind the ‘criminal meddling’, the questioning of people’s wisdom, was commissioned to him by the gods through the Oracle of Delphi. As Socrates said, “…but when god stationed me, as I supposed and assumed, ordering me to live philosophizing and examining myself and others…that my whole care is to commit no unjust or impious deed.”2He even seems to win a victory over one of his accusers, Meletus, in questioning this point. As Socrates points out, it is impossible for him to be both atheistic and to believe in demons, or false gods, for if he believes in the latter, then that would contradict his not believing in gods at all (since even demons are considered to be at least demi-gods). The second part of the charge was that Socrates was attacking the very fabric of the Athenian society by corrupting its citizens, namely the youth. In other words, Meletus and the other accusers are accusing Socrates of a crime of ‘non-conformity’ – instead of bowing to those who are held in places of authority and those who have reputations of being wise, Socrates believes that it is his role in life to question these people in their wisdom, and to expose those who claim that they are knowledgeable and wise, but who really are not. This nation of questioning the legitimacy of those in power would certainly not be called a ‘crime’ by today’s standards, nor would it really have in Athenian time. The true nature of this charge was vengeance carried out on the part of the power-holders of Athenian society: the politicians, poets, manual artisans. Socrates, in effect, made fools out of these people, exposing their speeches are mere rhetoric than actual wisdom and knowledge. By being a teacher as such, but never collecting any fees and therefore innocent from profiting from such ventures, he was said to have been corrupting and citizens of Athens into believing that these so-called people of wisdom were not actually wise at all. As Socrates says, “…and this is what will convict me, if it does convict me: not Meletus of Antyus, but the envy and slander of the many. This has convicted many other good men too, and I suppose it will also convict me. And there is no danger that it will stop me.”3 Another point to be made is that Socrates proves that if what he has done has actually been corrupting society, and could be considered a crime, then he has not caused any harm voluntarily. In any criminal charge, the fact of the accused’s mens rea, or ‘guilty mind’, would be compulsory to prove on a guilty charge. But Socrates states that, at least for him, voluntarily corrupting any human being would simply be impossible, “…I am not even cognizant that if I ever do something wretched to any of my associates, I will risk getting back something bad from him?”4 Although his ‘guilty mind’ was never proved, Socrates does realize that he will be found guilty of this charge, although he does say that justly this would never have been a criminal charge, but could have been dealt with privately, “…and if I corrupt involuntarily, the law is not that you bring me in here for such involuntary wrongs, but that you take me aside in private to teach and admonish me…where the law is to bring in those in need of punishment, not learning.”5 There is one other point that might be raised in questioning the legitimacy of the trial, and that is the fact that it was carried out in only one day. Socrates says after his verdict has been read that if his trial could have carried on for a longer period of time, as it might have in other cities such as Sparta, then he might have been able to convince the jury of his innocence. Alas, Socrates quickly became the victim of the wealthy elites in Athenian society, who did not want their hold on the power and minds of the rest of society who be tampered with. If justice is to be questioned in the charge of Socrates, then I do think that Socrates should have been found innocent, since no real crimes were committed. As for a question of the Athenian laws, and the structure of the Athenian justice system, one could say that Socrates might have dabbled in a bit of treason in a way, since those who he was publicly making a mockery out of were those who were in positions of authority. But overall, it cannot be denied that Socrates suffered a great injustice by being found guilty, by being put on trial in the first place. The true substance of the trial was never a criminal matter nor a strain on democracy, but a challenge to an oppressive and oligarcical ruling class, and Socrates became an symbol of true wisdom and knowledge, a symbol that needed to be disposed of for the elites to remain the power-holders in society. List of Works Cited Plato. “The Apology of Socrates.” West, Thomas G. and West, Grace Starry, eds. Plato and Aristophanes: Four Texts on Socrates. Itacha, NY: Cornell University Press, 1984. 1Plato, “The Apology of Socrates,” Thomas G. West and Grace Starry West, eds., Plato and Aristophanes: Four Texts on Socrates. (Ithaca, NY: Cornell University Press, 1984), s.19c, p.66. 2Ibid, s.29a/32d, p.80/p.85. 3Ibid, s.28b, p.79. 4Ibid, s.25e, p.75. 5Ibid, s.26a, p.75.

A Critique of Socrates' Guilt in the Apology. (2020, Jun 01). Retrieved from https://studymoose.com/a-critique-of-socrates-guilt-in-the-apology-new-essay 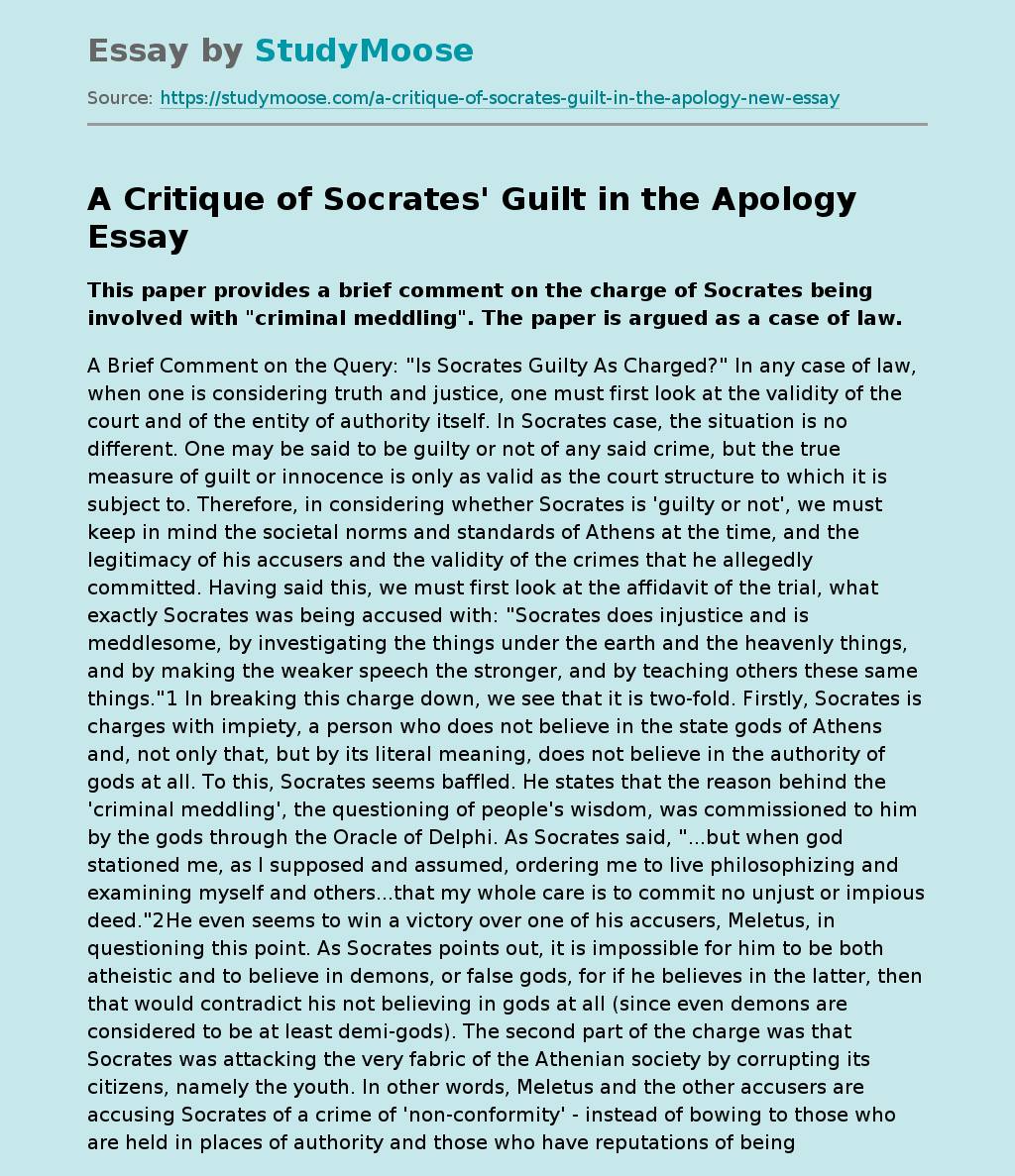