A critical appreciation of Keats' "Ode to a Nightingale"

John Keats, a poet of the romantic era, composed this poem in the spring of 1819. Being a poet of the Romantic era, he was a Nature lover, but instead of looking at Nature as a guide or teacher, he was in pursuit of beauty within Nature. The romantic poets emphasized on emotions, they believed in the power of imagination and experimented with new ideas and concepts. Keats is generally considered the most tragic of the Romantic poets as he was faced by a series of sad experiences in his life.

Don't use plagiarized sources. Get your custom essay on
“ A critical appreciation of Keats’ “Ode to a Nightingale” ”
Get custom paper
NEW! smart matching with writer

The poem was written a few months after the death of the poet’s brother.

Ode to a Nightingale is one of the five “spring ode’s ” composed by Keats. He emphasized on sensuousness, that is, his works appealed to all the five senses of sight, sound, touch, smell and taste. An ode is a lyric, which is lofty in style and is usually addressed formally to its subject.

Greek and Roman mythology were inspiration for his poetry.

Medieval elements and romances and Arthurian legends were incorporated into his poetry. He had the gift of a vivid and picturesque imagination that fills his poetry with a brilliant sense of imagery.

The poet begins by explaining the nature and cause of the sadness he is experiencing. This sadness is converted into physical ache and “drowsy numbness”. He feels as if he might have consumed some sort of drug to ease his pain, this resembles the qualities of the Lethe, a river in Hades, the underworld, where the dead drank and went into total oblivion and lost all senses.

The feeling is a result of the deep awareness of happiness of the nightingale he hears singing; his resulting pleasure is so intense it has become painful.

The nightingale is referred to the “light winged Drayad of the trees”, implying that it is a tree nymph. Dwelling amidst the darkness of the trees in a forest, it sings unconstrained. The poem shows the contrast between the poet, who is earthbound and the nightingale, which is free and possesses seemingly ethereal qualities. The poet uses alliterative sounds produced by the repetition of ‘d’ (‘drowsy’, ‘dull’, ‘drunk’ and ‘drains’), ‘m’ (‘my, ‘dumb’, ‘hemlock and ‘minute’) and ‘p’ (‘pains’, ’emptied’, ‘opiate’, ‘past’).

In the second stanza, Keats longs for some intoxicant, “a draught of vintage”, which will help him to achieve a union with the nightingale, allowing him to forget his suffering and despair which will take him out of the mutability of all experiences in the mortal world. To him, a glass of this wine will transport him into that joyous world of the nightingale. He says that this red wine, will inspire him more than the colourless waters of the Hippocrene, which is the fountain of the muses, a source of poetic inspiration. He desires to be completely absorbed in the bird’s song. He wants to “fade away” with the nightingale, to drown all his sorrows and miseries and forget the unhappiness, the unhappiness that the nightingale has never experienced.

The nightingale, according to the poet has not been tainted by the ‘ weariness’ ‘the fever ‘ and ‘ the fret’ and therefore would not be accustomed to human suffering or unhappiness. In the line “to think is to be full of sorrow”, Keats seems to imply that if a being has any perception of itself or its surroundings, then it would certainly be habituated to misery. Keats then goes on to explain another cause of sadness that beauty is transient and it gradually loses its lustre. He also explains that separation is inevitable and one will invariably have to be separated from his or her loved ones. His desire to die is not because he wanted to be extinct but that he wanted to be in a world that is closed by contentment, that is, the bird’s world.

Keats decides against relying on Bacchus, the Greek god of wine and instead hopes to rely on the “viewless wings of Poesy’. This shows that he still wants to escape from the misery but instead of drinking he would rather escape through the world of fantasy and imagination. For him, the outlet to his pent up emotions is poetry. He says that whatever light or happiness that penetrates through the thick foliage in the forest, he will bask in its glory and accept with all humility.

The fifth stanza continues with paradoxical ideas, although the natural beauty of his environment is physically denied from him, it is not withheld from his mind’s eye. The “embalmed darkness” signifies that darkness is soothing when one does not want to be disturbed and wishes peace. He says that the vegetation is so thick and he cannot see, but he is still able to describe the “grass”, “the thicket” and the “fruit-tree wild” as if they were commonly found in the material world. He says that the smell of the flowers was so sweet and so invigorating that the flies were intoxicated by their fragrance.

Keats refers to the nightingale as a “darkling ” this signifies the dark and sad feeling represented by the nightingale. The poet realises that the ultimate form of escape from the troubles of life would be death. He realises that death will take away his pain and put and end to all his tribulations. He calls to death like a lover as he says, “I have been half in love with easeful death”. Death at such a moment, listening to the nightingale pouring forth its soul in ecstasy, would be an ultimate ending to his life. Keats, being a master of paradox, speaks of the natural art of the bird’s song which is associated with the high requiem which indicates mortality and the plaintive anthem is associated with mortality.

In stanza seven, he says that although all humans must die, the nightingale is in a sense eternal through its song. He says that human life dies, but the beauty of something as special as the nightingale’s song will live forever. Keats thinks about the classical world of emperors and of Ruth, and considers how the song has been heard for many centuries. Keats also talks of “Charm’d magic casements, opening on the foam/ of perilous seas, in faery lands forlorn”. This signifies that the song, a thing of beauty lasts forever and perhaps possesses the power of introducing one to a world of fantasy.

With the use of the word “forlorn “, the poet is transported back into the world of reality. The phrase “the fancy cannot cheat so well/ as she is famed to do, deceiving elf” shows that the power of perception and imagination stimulated by the bird has cheated him and that it cannot take him away from the world that he is a part of. The same music, which instigated him to take his own life, now brings him back to the realm of reality. The song gradually fades out and is now “buried deep /In the next valley -glades”. Keats is unable to decipher the real world from the illusionary and wonders if the song was a “vision” or a “waking dream”. The monotonous song is not a part of his world any longer and he is away from that world of stupor.

The ode to a nightingale according to me is an amalgamation of an attempt to escape from the sorrows of life and an acceptance of the human conditions accompanied by human suffering. It showcases Keats’s path to realisation and his transition beyond the mundane world which is full of “sorrow / And leaden-eyed despairs” to the mystical universe of Nature.

A critical appreciation of Keats' "Ode to a Nightingale". (2016, Jul 12). Retrieved from https://studymoose.com/a-critical-appreciation-of-keats-ode-to-a-nightingale-essay 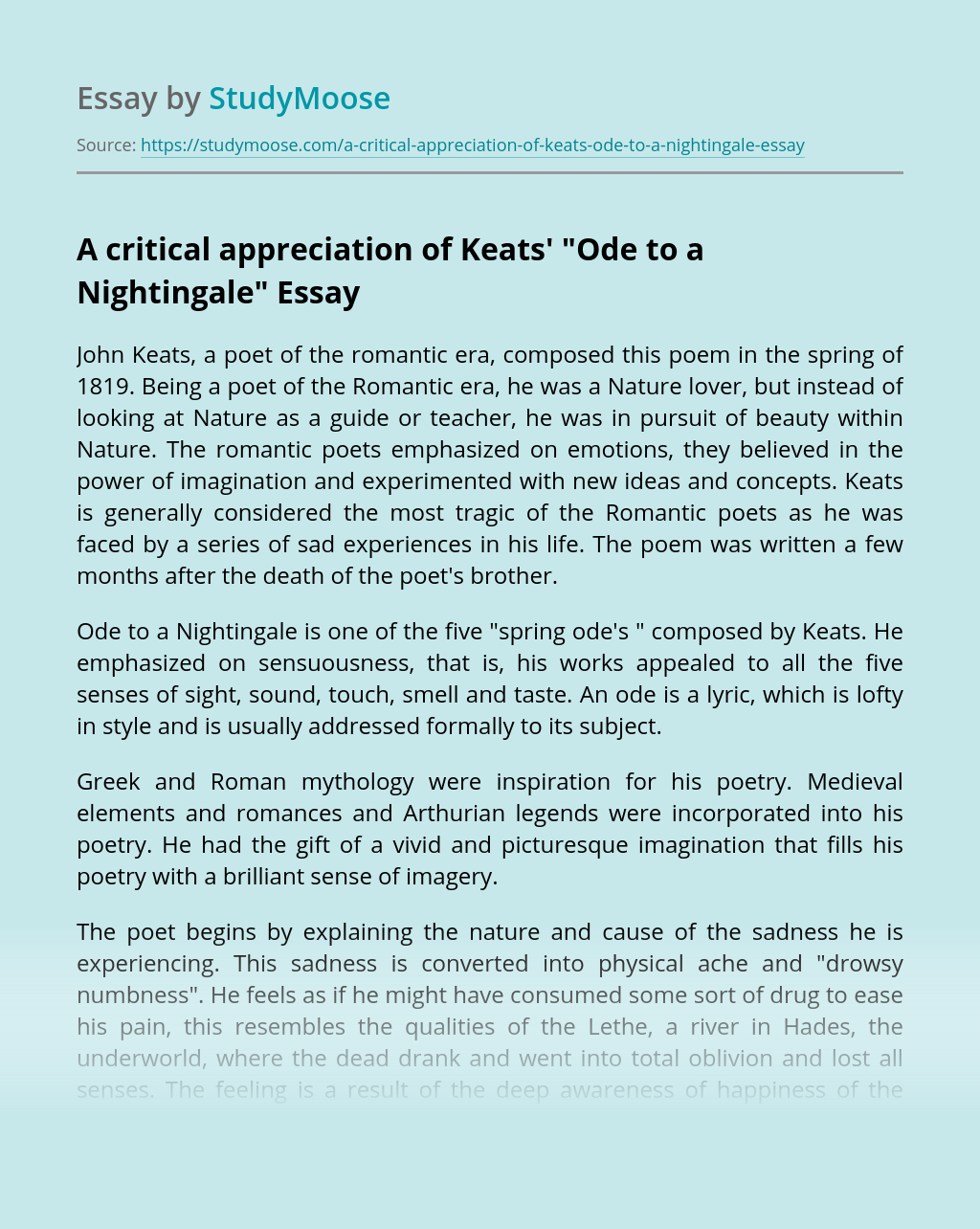