A critical appreciation of a passage in Emma

In this passage, Jane Austen’s style mostly contains a combination of language, with the third person and past tense, associated with the narrator’s perspective, irony and tone. Her style is direct and subtle, while noticeably dropping hints of what is truly happening, throughout the novel. Her style also reveals concerns such as mystery, suspicion and humour. The passage opens with a very descriptive paragraph, which sets the scene. It is subtle and to the point, creating an instant emotion, while unobtrusively setting up objects of satire.

Don't use plagiarized sources. Get your custom essay on
“ A critical appreciation of a passage in Emma ”
Get custom paper
NEW! smart matching with writer

For example when referring to Emma’s always doing what she liked. This is typical of Jane Austen’s style; she is simple and direct, and similarly sets up the character of Emma at the beginning of the novel. This also creates an immediate effect; that Emma is arrogant and almost too perfect, with everything one could wish for. Another aspect of Jane Austen’s style is to allow the reader intimate access to a character’s thoughts, “Emma could not but pity such feelings, whatever their origin… ” which show Emma’s true personal feelings, which would be quite different to her lines of dialogue.

The novel is mostly in third person, but through the eyes of the main character. Because Emma is the domineering character, the reader’s position is very close to hers, and therefore, understanding her thoughts and emotions allows the reader to become compassionate towards her faults, and keep sympathy with her. If the view was through any other character’s eyes, Emma would be seen in a much harsher, unforgiving light.

Irony of this sort is often used in Emma in creating the reader’s double vision of the heroine.

If we did not know Emma’s inner thoughts, or saw the events through the eyes of another, we would have a very different, less sympathetic view of her. This quote, “could not but pity such feelings, whatever their origin… ” also has a sense of irony, as neither Emma nor the reader knew that Jane was experiencing true hardships, much more serious than “nerves. ” This is why the thought of humour comes up in this passage, as with the rest of the book in hindsight, as we now know how ‘in the dark’ Emma is about Jane’s situation and her and Frank’s true connection.

The reader consequently shares Emma’s path to self-discovery; in the first reading of the book, the true relationship between Frank and Jane is not known at the timing of this passage, and revalations become apparent to us at the same time as they do to Emma. But, at the same time, I felt that I could see things much more clearly than Emma did, as I was not misguided by romantic fantasies, but saw the novel through a real light, and found it ironic that Frank was always visiting the Bates.

This is also another of Austen’s techniques – to allow the reader to have their own opinion of what is happening in the story, despite the point of view of the dominant character, Emma. While her opinions are made clear, the reader’s own opinions also develop. The irony of this passage begins with “the young man was yet able to shew a most happy countenance on seeing Emma again. ” This is ironic because on looking back, Frank actually had his eyes set on Jane – he was secretly engaged to her – while both Emma and the reader may originally believe he had feelings for herself.

Irony is later realised, in that Frank probably had intention of visiting Jane, rather than making the journey with the focus of fixing Mrs Bates’ spectacles. The reader may, however, have suspicions that Frank is using this situation, and indeed Emma, to disguise his real situation. This adds to the novel the concern for ‘mystery. ‘ Also in this passage, the origin and sender of the pianoforte is a mystery to Emma and probably the reader too on first reading the novel. It is ironic that this ‘mystery’ instrument is actually hiding Frank’s ‘mystery’ of his secret engagement to Jane. Have you not finished it yet? ” is also mixed with irony, because the simple task of fixing the glasses was filled with interruptions – Mrs Bates’s “slumbering on one side of the fire,” has left Frank and Jane alone together. This creates an idea of suspicion in the reader’s mind. The tone of this passage is quite subtle, yet when reading the novel for the second time, humour is noticed, as we realize just how wrong Emma was about people and their relationships and true feelings.

Part of the author’s style is to voice her own opinions, but not to impact on the overall feelings of Emma. The use of direct and indirect conversation diverges according to how much the reader needs to be involved in the immediate material. There is little dialogue in this passage, and it is indirect, which puts more distance between the reader and the material, allowing own opinions and suspicions to arise, and at times a better satirical view.

In conclusion, this passage uses a range of techniques, such as irony, subtle tone which does not distract from the views and thoughts of the main character, laying out a direct description to set a scene, and directly accessing the dominant character’s thoughts. These things are all needed not only for the reader to make their own views and suspicions in the course of the novel, but delving into Emma’s true thoughts also allow the reader to understand her fully, and understand and accept her behaviour. Style techniques such as irony also set up concerns such as mystery and suspicion.

A critical appreciation of a passage in Emma. (2020, Jun 02). Retrieved from http://studymoose.com/a-critical-appreciation-of-a-passage-in-emma-essay 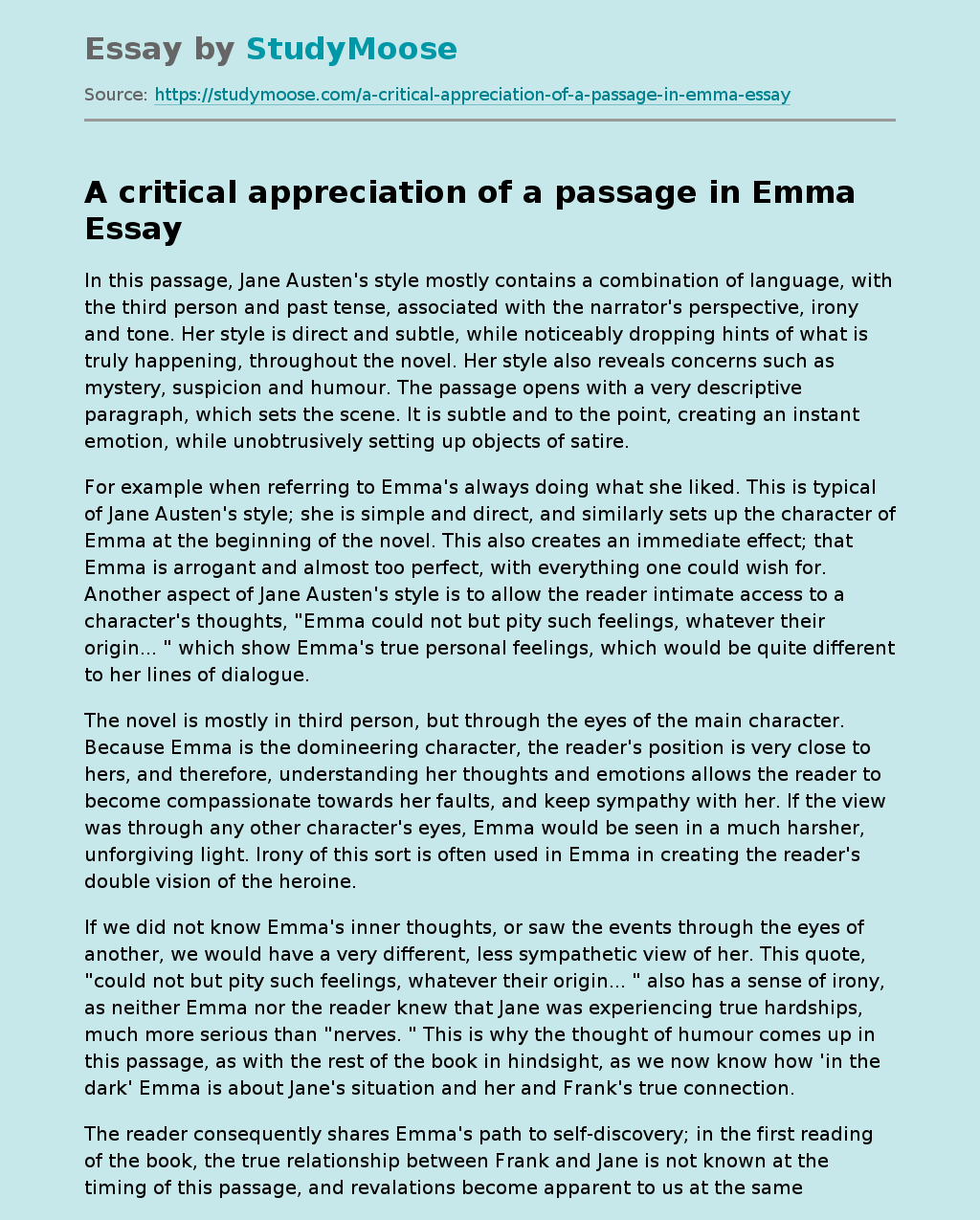