The book I did was “A complicated Kindness” by Miriam Toews] Sixteen year old Nomi Nickel lives with her dad Ray Nickel in a small Mennonite town talks about her life after the disappearance of her sister followed by her mother. I really enjoyed reading a complicated kindness, it was a great book because its not like most books ive read where the good guy kills the bad guy;but because it was personal and there wasn’t a huge plot or anything.

Don't use plagiarized sources. Get your custom essay on
“ A complicated Kindness ”
Get custom paper
NEW! smart matching with writer

Linda Richards from the January Magazine said that it was difficult for her to dissect this lovely book. The aspects were looked at from the eyes of a young rebel who has our sympathy from the first page.

[For the Plot] The novel has no central plot line; it’s told by Nomi’s personal experience and doesn’t follow a consecutive order. It is also unnerving and somewhat funny. When she speaks about the Mennonites and how they’re the most embarrassing type of people to belong to when you’re a teenager,she describes the event of how Menno Simons came up with his ”religion thing” and ended up with a Mennonite community.

Another example is when she wonders where her mom disappeared to, and how mennos don’t really care because that’s how stuff works out in their community. Everyday a happy family breaks down and manage to fly away.She imagines her mom travelling around the world because that’s what she was always up to but what’s disappointing is the fact that she left her passport.

I think that part drew my attention and made the plot sound more curious. It also giveses the reader the ability to draw a conclusion of where her mom my might be .. BUT why’ she leave her passport behind?

Liesl Schillinger from NY TIMES said that ”Nomi’s hunger for life prevents the novel from being as bleak as her situation might suggest; her account of trials is veined with a dark humour that glints with the glee of payback”

the characters were demonstrated in a very explicit way. They’re considered to be realistic and relate to characters found in the real world.

Ray nickel is one of the main characters that brought my attention, when he left nomi a note before he disappeared, he said that he wanted to leave before she did so he doesn’t get hurt ,and to give her the freedom to do whatever she wanted too.He told her to remember the affirmative words of Jesus ” I am with you always” .

This character gives the story hope with his emotional thoughts towards his daughter, how he still managed to abandon his daughter just to give her freedom without him getting hurt .Nomi felt devastated ,she said in a quote. “I have a theory, though: it was grief that drew my mom to you and love that pulled her back. Love for ray and for me and Tash”

The setting plays a major role in the novel, in which I thought everything was relevant to it. It’s situated in East village, Manitoba. A small town whose population is Mennonite (Mennonites are a group of Christian Anabaptist they are committed to nonviolence, nonresistance, and devoted to Bible study, prayer andnchurch).However if you’re a menno your must go by the rules or you’ll end up being excommunicated. In the novel Nomi describes how good Mennonites don’t really celebrate the arrival of another year being imprisoned in this world, this shows her hatred toward the Mennonites. She says in a quote ” this Mennonite town is so sever and silent, it makes me go crazy. The silence I wonder if a person can die from it”

I think the moral lesson, Towes is trying to teach us;is that struggle is said to bring people together and break them apart. Love will endure in the end and bind people together mentally if not physically.Hope didn’t play a big role in Nomi’s character; it was almost like every time she’d hope for something it wouldn’t happen, the way she was hoping for her mom and sister to eventually be a part of their family once again. This made me think the book fell apart in the final chapter, because throughout the novel she was hoping for that one day that they could finally come together and be a family again; this hope, almost dream of hers didn’t happen and I feel that the author failed in accomplishing that. I recall Nomi saying in a quote “there’s a kindness here, a complicated kindness, you can see it sometimes in the eyes of people when they look at you ”

It was descriptive and was first person narrative;for instance she describes the car her dad left her before he disappeared in a whole paragraph.The verb tense throughout the novel was sometimes mixed making the reader wonder if she’s talking about the present or if she’s older now or looking back. Another aspect was the lack of quotation usage when she was speaking

Overall a complicated kindness is a great book to read , it shows how strong families can turn against themselves and break apart. 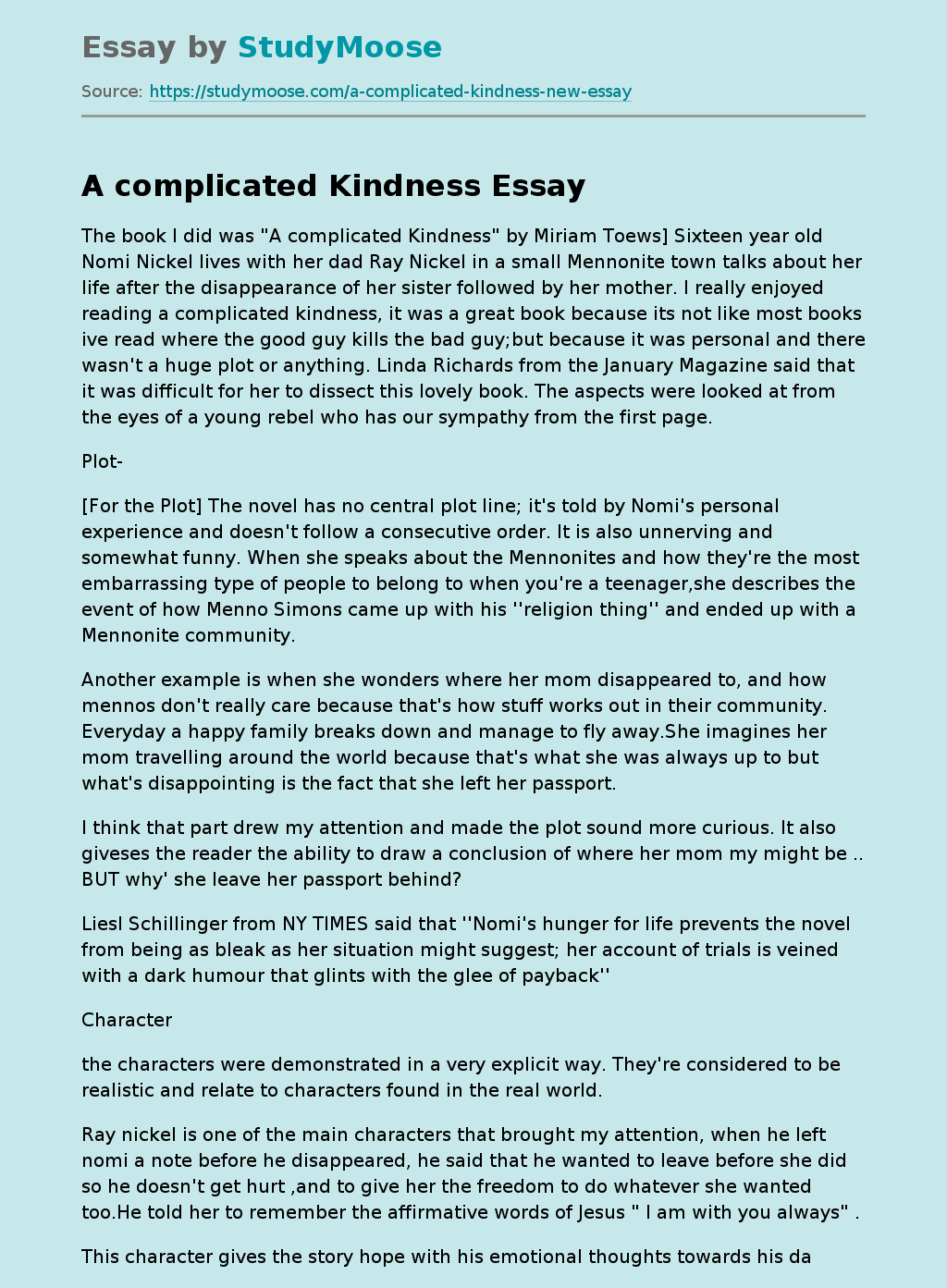