A Comparison of Two Short Stories

A Journey Is defined as a “passage or progress from one stage to another: the journey to success” (Dictionary. om online dictionary, n. d. ). These two stories allows you to place yourself in the characters shoes to see and feel the story that is being old through the character eyes as you watch It unfold. The Journey that Is being told by Jean Rhys Is definitely one that can be related to by anyone that has made a visit to their childhood home minus the death.

Don't use plagiarized sources. Get your custom essay on
“ A Comparison of Two Short Stories ”
Get custom paper
NEW! smart matching with writer

It is also easy to relate to Frost’s character because I have been at several crossroads in my life and have often chosen the road less taken, which has yielded great and not so great outcomes.

These writings are obviously taking place outside on a road, indicating that a Journey Is In the works. Although both stories use imagery and symbolism, they are extremely different in heir message. Rhys’ story uses imagery to help detail the spiritual Journey ofa woman whose reality comes to a very climactic ending when she realizes that she is no longer alive.

Frost’s story regales us with his version of Imagery In which his character learns that It’s not always important which road you take; as long as you choose one, you will experience the life that come with it.

The character is trying to let us know that it is very easy to make a life-changing decision based on an outer something that was not known to the characters before the Journey began.

As each f these stories develops, the characters do not portray the same mindset towards their paths. In both poetry and short stories, a theme is intended and conveyed through the author’s works. Literary elements such as rhythm, rhyme, and tone differentiate poems from short stories and dramatic works. However, there are some similarities between short stories and poetry which include fgures of speech, settings, foreshadowing and conflict.

These allow the reader to connect to the author and their works. Settings are important because it depicts “the time or place in which fictional events occur. It puts boundaries around the action and defines the environment in which conflicts can be witnessed and character development observed. Setting may also have a social dimension in which particular local customs, dress, or speech provide a framework for understanding the characters and their interactions” (Clugston, 2010). The one major similarity between these two works is the absence ofa plot.

Our text defines a plot as “a dynamic element in fiction, a sequence of interrelated, conflicting actions and events that typically build toa climax and bring about a resolution” (Clugston, 2010). Poems are written utilizing verses or stanzas which cause the reader to experience an emotion. Short stories on the other hand are fictional writings that details cause and effect and it is shorter than a novel. “The Road Not Taken” has four stanzas of five lines in which a rhyme scheme is taking place, syllables are being emphasized or stressed and it utilizes iambic tetrameter instead of pentameter.

Tetrameter is define as “a line consisting of four dipodies in trochaic, iambic, or anapestic meter; a verse of four feet” (Dictionary. com online dictionary, n. d. ). There is absolutely no climax in “The Road Not Taken”, as the characters only decision is which road to take. Steppe states, “In the poem there is a man who has come toa crossroad in his life. One path is traveled on frequently while the other path is not. He has to make a decision as to what path he should take. No matter what, he knows that he cannot turn back once he has made the choice, but it is implied” (“Symbolism”, 2011).

He chose the road that was traveled the least and it was the perfect decision for him. According to Clugston, a symbol is “a word picture that presents an object, person, r action that conveys two meanings: Its own literal meaning and something it stands for as well” (Clugston, 2010, Ch. 2. 3, Para. 10). In I Used To Live Here Once (1976) Jean Rhys details a woman’s return to a place she called home in which the story is being told through her eyes as she gives vivid details of subtle and not so subtle changes of her surroundings in which you can visualize the sentiment she has for the place.

The point of view for this short story is limited third person omniscient, and according to Clugston (2010), it is defined as “a point of view when the thoughts and eelings of only one of the characters are related to the narrator” (Ch. 5. 2, Para. 3). If the author had used a different point of view and had not provided the reader with the very intimate and thoughts of the character, the symbolism would have been lost or too abundant, that some key points to the story would have been missed.

The point of view in The Road Not Taken is first-person-point-of-view, which “occurs when the narrator describes his or her personal action and thoughts as a participant in the Rhys’ story begins with her character standing by a river looking at the stepping tones and remembering the details about each of them (Clugston, 2010). Each stones description could represent a time in her life in which she was faced with easy and difficult situations in which choices were made, whether good or bad. “The next one wasn’t so safe for when the river was full the water flowed over it and even when it showed dry it was slippery’ (Clugston, 2010).

A Comparison of Two Short Stories. (2018, Nov 12). Retrieved from http://studymoose.com/a-comparison-of-two-short-stories-essay 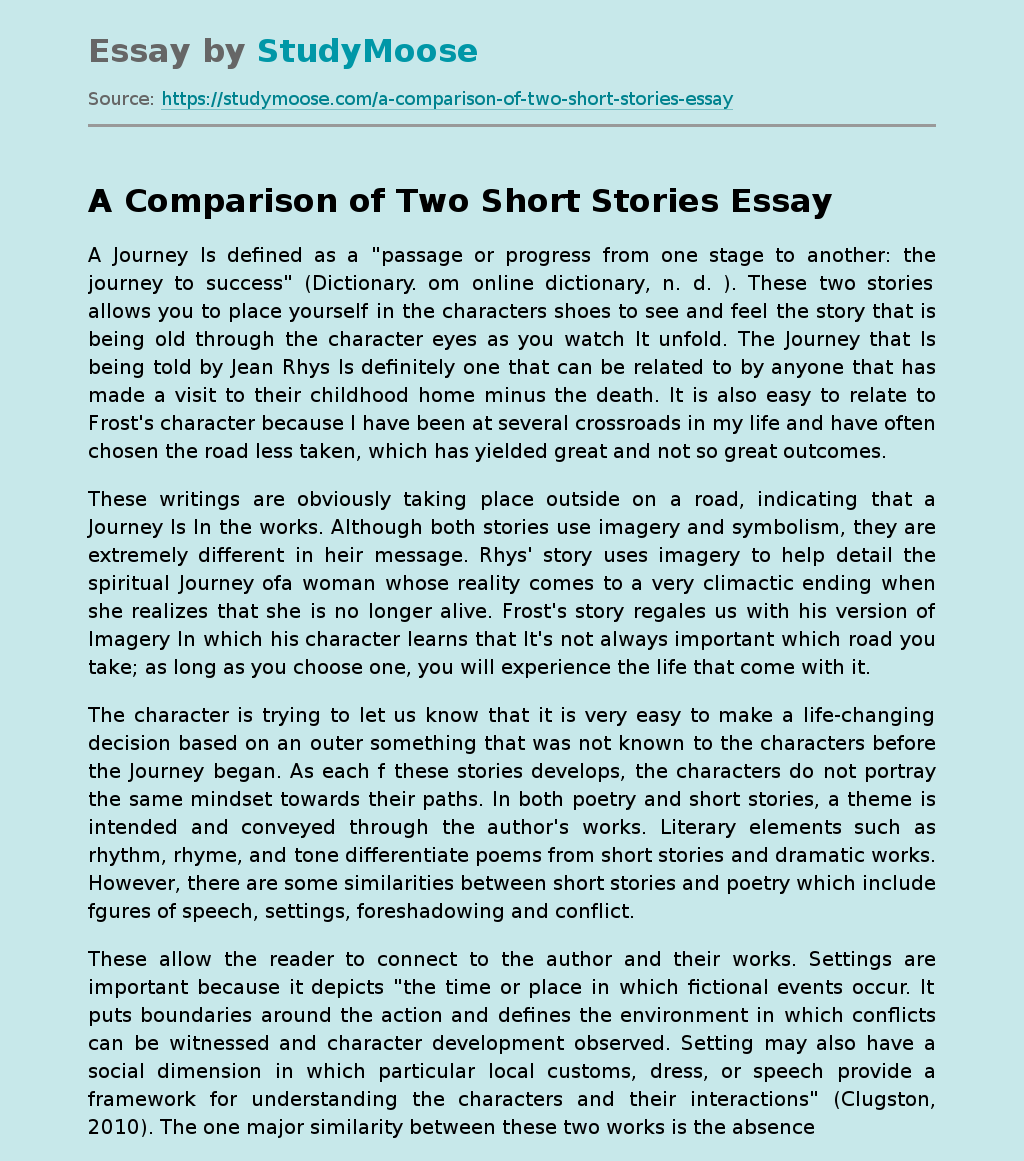