A Comparison of Three Cinderella Stories

Charles Perrault’s Cinderella begins with an introduction intended for the French Court through use of words as nobleman, proudest, and haughtiest. There is no emotional attachment as is seen in Jakob and Wilhelm Grimm’s Ashputtle. Ashputtle begins by introducing the reader to a young girl at the bedside of her dying mother. As Jakob and Wilhelm Grimm are German authors, the reader gets a different sense of appeal. Although it appears to be a tale targeted for the common class, there is still a division of classes within the society, as the tale begins with, “A rich man’s wife… “.

Don't use plagiarized sources. Get your custom essay on
“ A Comparison of Three Cinderella Stories ”
Get custom paper
NEW! smart matching with writer

There is also use of the word “haughty”, by the two stepsisters when they tease Ashputtle about her old gray dress.

Tannith Lee’s When the Clock Strikes is completely different from the previous two tales, most likely because this tale was written more recently (around 1971), and there was a very major difference in the world as compared to the world when the other two tales were written.

It is very descriptive and might appeal to formalist critics. This version of “Cinderella” begins with the focus on time and place. There is a very strong sense of time, not only indicated by the title but also by the introduction, which begins, “Yes, the great ballroom is filled only with dust now”, and later in the same paragraph with, ” Two hundred years now, since… “. There seems to be a focus on nobility with a direction toward the upper class.

Charles Perrault’s Cinderella continues to lack emotion as there is no discussion of Cinderella’s mother, nor are their details of the wedding. In fact, with the lack of these details and wording that is used, “No sooner was the wedding over… ” the reader might think the wedding was one of convenience. The husband appears weak and is described as being under his wife’s thumb. He is not a prominent character in the tale. Cinderella has a fairy godmother, a symbol of her real mother, who tells her to be a good girl. Cinderella is very good and does as the fairy godmother tells her to do. She is kind and thankful to those around her and is rewarded with true love from a prince, who marries her and rescues her from her miserable life. Similarly in Jakob and Wilhelm Grimm’s Ashputtle, before the mother dies she tells Ashputtle to be good. Three times a day, Ashputtle would cry and pray at her mother’s grave. She made wishes that were granted by a little white bird.

The moral of these two tales might be that a person may be more likely to get what they want if they are good. Conversely, in Tannith Lee’s When the Clock Strikes, the elements of the traditional Cinderella story remain, but the moral has been changed from good to revenge. In this tale, Ashella is the daughter of a witch, and a witch herself. She does not require the help of a fairy godmother or a pair of turtledoves as she is well versed in the Black Arts. Her mother is discovered to be a witch and is burned, but not before she swears Ashella to the fellowship of hell, and then forces a knife into her own heart, right in front of her daughter. Ashella grows up and attends a ball in honor of the prince. At midnight, with every stroke of the clock, she curses the prince and vanishes.

Carl Jung, the founder of analytical psychology, favored symbolism and compared it to the development of the human psyche. Jung saw each stage of life as carrying developmental significance and saw symbolism as a way to make developmental comparisons. In contrast, Sigmund Freud was preoccupied with early childhood and the emotional damage caused by a child’s response to the need for parental approval. For Freud, symbols had a concealed content to evade censorship and to communicate to the unconscious.

Good/Evil is a universal symbol that is used in each of these tales. It is a symbol that every reader can relate to. In Cinderella and also in Ashputtle, there is implied innocence and a passive nature in each girl as she is treated poorly at the hands of the stepsisters. Ashella is thought to be innocent by the people that find her mother and burn her mother’s body, but the reader is aware that Ashella prays to Lord Satanas and is preparing for vengeance.

Each of these tales uses color, not only as a conventional symbol, but also as a cultural symbol, to reflect social values. The elaborate and auspicious colors of the gowns that each girl wears suggested a weakness for worldly display. In Cinderella, the elder stepsister says that she will wear a red velvet dress. Red, in this instance, may be significant of the quarrel not only between the elder stepsister and Cinderella, but also between the two stepsisters as siblings, as they compete for the attention of the King’s son. On the other hand, red is used to describe Ashella as having dark red hair and reddish-amber eyes. This suggests a fiery temperament and sets the mood of the tale, perhaps that Ashella will lose her temper. In fact, fire, a universal symbol, is used to describe Ashella as she dances, signifying that she will be triumphant.

White is frequently used in Ashputtle and is significant of purity, success, happiness, and love. After the death of Ashputtle’s mother, winter is not described as being cold, but rather as a white cloth that covers her mother’s grave. This indicates the mother is now at peace. The stepsisters are described as having faces that are beautiful and lily-white, but they have ugly, black hearts. Thus the blackness in their hearts diminishes their beauty. When Ashputtle goes to her mother’s grave to pray, a little white bird appears each time, perhaps a symbol of her mother’s presence. The little white bird also gives Ashputtle what she wishes for. There are also little, white turtledoves which represent the Holy Spirit and faith, as they descend from heaven to help Ashputtle sort out the lentils from the ashes.

Transformations are used in each tale and indicate the importance of movement and progress. In When the Clock Strikes, Ashella’s deathly transformation suggests that she lost a sense of her own humanity as she became ruthless in her pursuit for revenge. However in Cinderella, the transformation of the pumpkin into a coach enables the pumpkin to have abstract qualities. Furthermore, the transformations of the mice into horses and the rats into fat coachmen are compatible to that time period’s social values and expectation of personality and character.

This sibling rivalry is resolved in Cinderella, when the two stepsisters beg for Cinderella’s forgiveness for all of the unkind things they did to her. Cinderella forgave them, without hesitation, and they all lived happily ever after in the same palace. In Ashputtle, the stepsisters are punished with blindness for being so wicked and false, not by Ashputtle but by the two turtledoves, and have their eyes pecked out by the turtledoves. This forces them to look inward for their beauty. In When the Clock Strikes, Ashella uses magic to gain revenge by cursing the prince, which ultimately forces him to lose his mind. The prince later finds out that the silk merchant is her father and on his way to the merchant’s house, he is killed in the road by intriguers.

A Comparison of Three Cinderella Stories. (2016, Jul 07). Retrieved from https://studymoose.com/a-comparison-of-three-cinderella-stories-essay 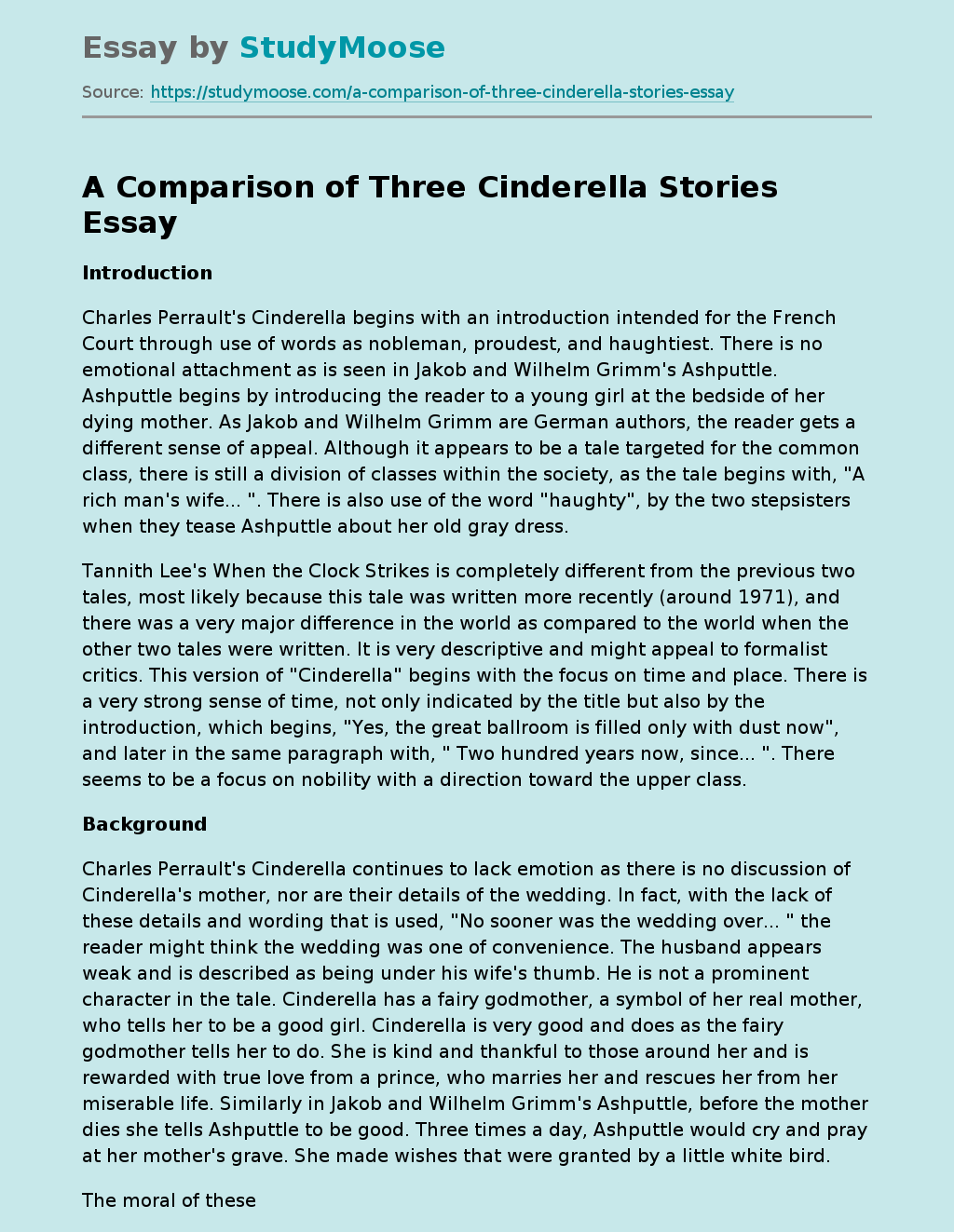