A Comparison of Han China and India

Mauryan/Gupta India from 320 B.C.E. to 550 C.E. had similar as well as different methods of political control with that of Han China from 206 B.C.E. to 220 C.E. in the sense that both used culture to justify social inequality supported with the idea of rising in social status and the use of religion to help with political control. The differences were more seen by the twos’ organization in political control as well as the language role in the midst of the civilizations.

Turn in your highest-quality paper
Get a qualified writer to help you with
“ A Comparison of Han China and India ”
Get high-quality paper
NEW! AI matching with writer

The differences between the Han and Gupta/Mauryan had been largely attributed to the main sense of political organization when keeping a civilization running. Han China was more organized due to a solid bureaucracy as a solid political system where all people would be told what’s what so there wouldn’t be confusion as to where ideas and laws were going. India on the other hand had regionalism which could go differently for each political system that would be developed.

This political method appeared to be the best option for India since the Geography would not permit them a more central and organized political system such as the one that Han China had created.

Another political difference involves the use of a language. Han China had the standard language of Mandarin which kept the civilization more together and unified as a whole. India did not have a standard language at all. They did have the use for Sanskrit but this was mainly reserved for the elite only.

Both Han China and Mauryan/Gupta had the idea of a social hierarchy and the achievement of a status on that hierarchy. However the Han had less of a religious route than India in this sense. Han China had a course of study for all students known as the civil service exam. The passing of this exam would ensure and/or determine a student’s position in the government. India would have a religiously political setup where there would be a change in social status through reincarnation.

At another point both Han China and India used religion in a way to help their political control. Han china’s political method underwent Confucianism which would allow everyone to have a good picture in their heads of a world that can be unified so as long as they follow their duties and follow an individual sort of role all the while. India had Hinduism as a form of political control. As it became popular under the Guptas, Hinduism was made the main religion which in itself unifies the people under one single religion.

Han China was overall stronger when it came to that of political organization and the use of a standard language to keep the people unified. India still kept up similar characteristics with regionalism and Sanskrit but was not as strong. Both still had evened ideas to do with rising in social status and ensuring political control through religion.

A Comparison of Han China and India. (2017, Jan 01). Retrieved from https://studymoose.com/a-comparison-of-han-china-and-india-essay 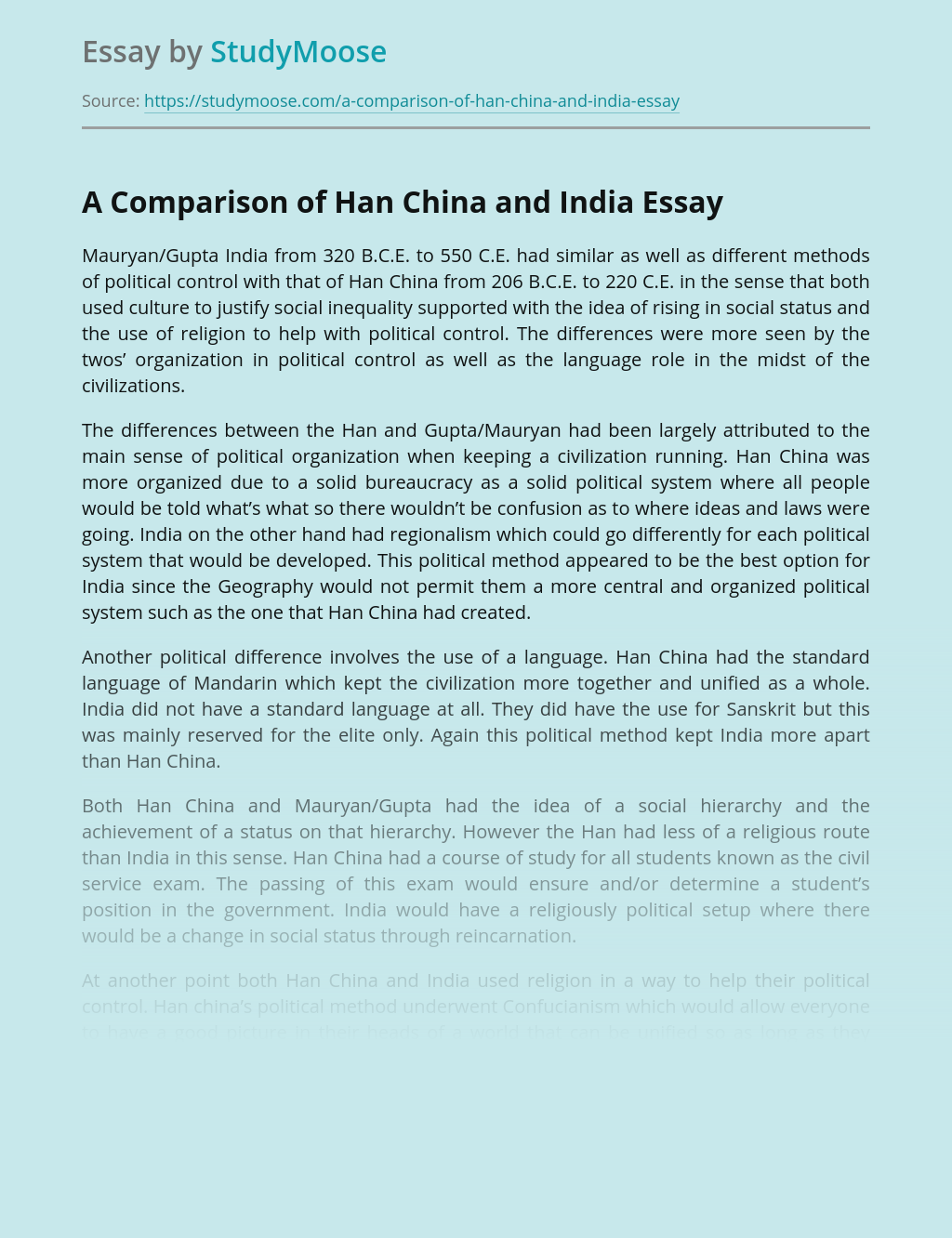 Turn in your highest-quality paper
Get a qualified writer to help you with
“ A Comparison of Han China and India ”
Get high-quality paper
Helping students since 2015
Stay Safe, Stay Original