Society’s alienation and misunderstanding of humanity can transform once life, both Gregor Samsa and Norman Bowker suffered from isolation. Freedom is truly conquered when one is at full peace spiritually; one can be imprisoned in its own thoughts, desires and memories. To follow I will provide examples form both narrative texts were both characters are imprisoned in their own thoughts, desires and memories. In the process of discovering true freedom Gregor is pressured by society and his family to support them after his father lost his job.

Don't use plagiarized sources. Get your custom essay on
“ A compare and contrast Analysis of “The Metamorphosis” and “The Things They Carried” ”
Get custom paper
NEW! smart matching with writer

“At the time Gregor’s sole desire was to do his utmost to help the family to forget as soon as possible the catastrophe that had overwhelmed the business and thrown them all into a state of complete desire.” Trapped in a jam box where he must be exceptional, with a work mentality to support the family.

Hating his job as a travelling salesman, but must continue doing it to pay off his parents’ debts all he talks about is how exhausting the job is, how irritating it is to be always travelling: making train connections, sleeping in strange beds, always dealing with new people and never getting to make new friends or even a loved one.

We can see this on the text when he has the magazine cover instead of a real picture with a friend or a loved one (pg 89). “ Hung the picture which he had recently cut out of an illustrated magazine and put into a pretty gilt frame.

It showed a lady, with a fur cap on and a fur stole, sitting upright and holding out to the spectator a huge fur muff into wich the whole of her forearm had vanished!”

Leaving behind his desires as a human being all he will think about was his father’s debt and how much he will have to work to help his family. Gregor had earned so much money that he was able to meet the whole family expenses. We can see evidence in the text on (pg 111). “They had simply got used to it, both the family and Gregor; the money was gratefully accepted and gladly given, but there was no special uprush of warm feeling.”

His family has used Gregors noble hearth for their own benefit, for comfort since he was able to meet the whole family’s expenses and in returned cold hard words, and isolation were given to him, no love. No true family love disgusted by the truth cockroach he had become, an animal treated like one left in the dust, completely alone slowly becoming a curse in his sister’s eyes and the rest of the family. We can see some of the sister’s rejection toward Gregor when she brings in the food on (pg 107). “ But his sister at once noticed, with surprise, that the basin was still full, except for a little milk that had been spilled all around it, she lifted it immediately, not with her bare hands, true, but with a cloth and carried it away.”

Trapped inside a body that repulses his family months passed by and Gregor is physically and mentally abused by his father several times, starving for true family love. At the end of the text when Gregor finds humanity, he feels no shame about anything or anybody he moves toward the music fights towards something that he felt passion about without thinking about the others. Is when Gregor truly understand the meaning of freedom and what it is to be human. On the other hand Norman Bowker and courage soldier, a survivor from the Vietnam War who fought for our freedom. A true warrior earned 7 medals in his soldier journey and he will not see the greatest in him.

Having difficulty adjusting to everyday life in the late afternoon on the Fourth of July holiday, Norman drives around the lake on his dads Chevy for hours, passing time and thinking about his life before the war, as his memories from Vietnam. He remembers driving around the lake with Sally before the war thinking about how his friends have gotten married or moved away to find jobs. Complete alone, isolated from his family and the world he imagines a conversation with his dad. We can see that Norman Bowker has no pride in him constantly putting himself down like it was no brave thing to accomplish the 7 medals on (pg 162).

“Well this one time, this one night out by the river… I wasn’t very brave.”

“ You have seven medals.”

Norman continues to drive around the lake while listening to the radio and thinks more about courage and cowardice was something small and stupid. Thinking about the incident that led up to Kiowa’s death on that rainy shit field and recalls the scene with great detail as the memories play again and again in his mind. Torturing him every second, thinking that he could have done more, and extra effort would have saved him and putting the guilt on him. His consciences was stronger them him unable to cope with his life, trapped in thoughts. The war was over and his not free, his locked in in his horrible memory punishing him every second of his life, complete alone from the world and eventually killed himself. He hanged himself.

Overall both text Frank Kafka’s, The Metamorphosis and The Things They Carried contributed me to a better constructive symbol of what means to be human since we see the downfalls and rises from each character. Gregor provides the strength to fight for your beliefs for what moves you in life as a person. I realized that one has to enjoy life have friends spend time with their love ones and grow as a person, not just work because at the end you may never know what can happen and Norman Bowker taught me that we have to be at peace with our sol and mind, learning to forgive ourselves to turn the page of that horrible experience we had in life, even if sometimes can take a life time.

A compare and contrast Analysis of "The Metamorphosis" and "The Things They Carried". (2016, Apr 28). Retrieved from https://studymoose.com/a-compare-and-contrast-analysis-of-the-metamorphosis-and-the-things-they-carried-essay 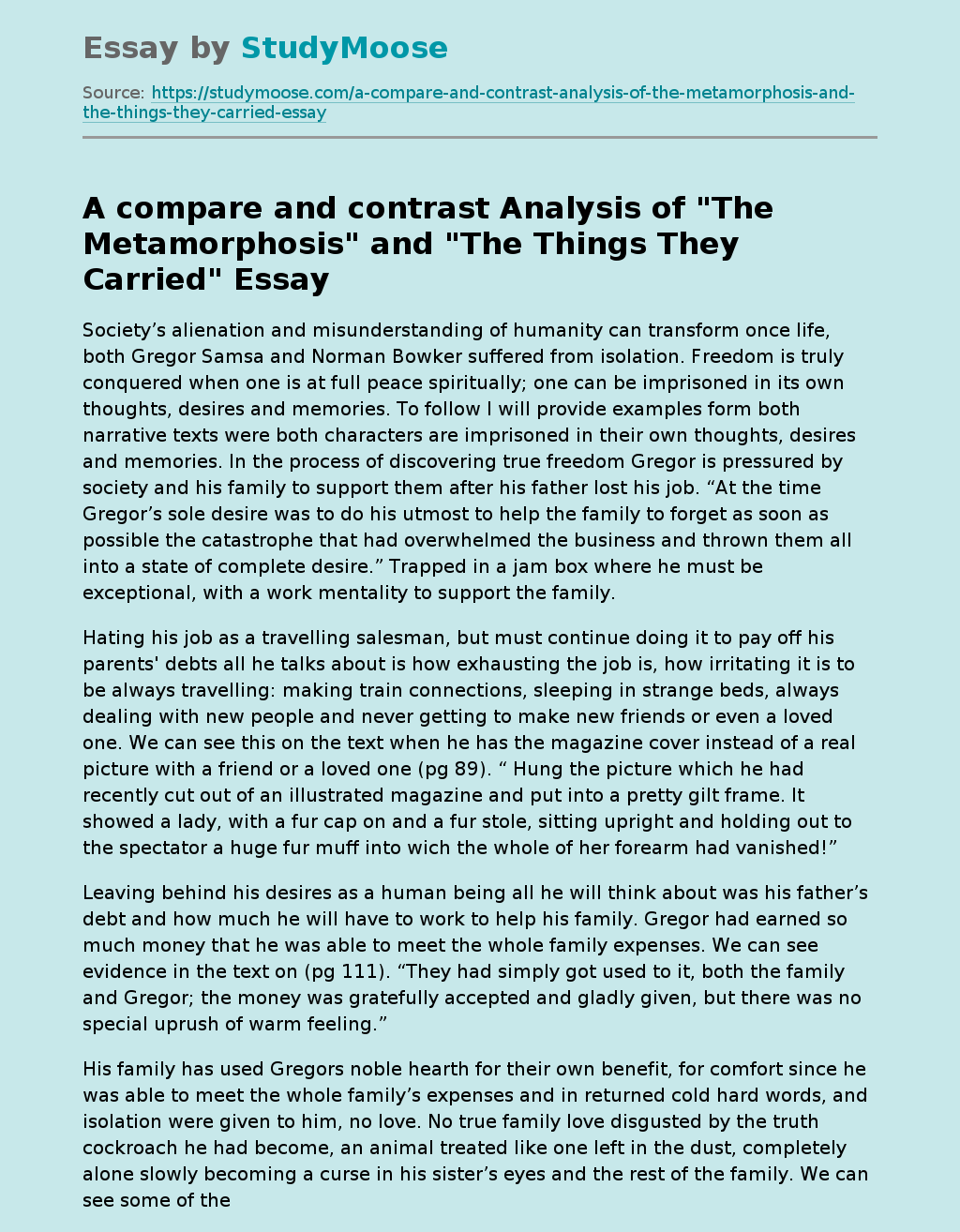