A classic novel, “Brave New World” by Aldous Huxley process similar themes of the post-apocalypse play Mr. Burns: A Post-Electric Play due to both of them have a dystopian fictional world. A key reference that the play features of becoming a brave new world of a group of survivors living in a disastrous world of darkness trying to reminiscence the times of the Simpsons episode: “Caped Fear”. Whereas the book features the government using tactics to instill fear of the citizens and grabbing control of the world is absolutely between good and evil, even our freedom from sadness or depression, and freedom from boredom while being given to drugs to make them feel happy, but it’s a fake happy, and not a very productive one, examining embryos and giving natural birth to fit in a certain class.

Don't use plagiarized sources. Get your custom essay on
“ The “Brave New World” by Aldous Huxley Analysis ”
Get custom paper
NEW! smart matching with writer

How can we live in a society? Without freedom of choice of what we want to do instead of being told what to do with no authority figure charging us in our society, and being brainwashed by your own society.

Only with knowledge will we able to understand good and evil. Knowledge is a combination of good and evil. We live in an unbalanced society filled with sex, drugs, consumerism, materialism that we don’t need. It becomes relevant to our world living as a utopian society without being as an individual and having the ability with rational thought in society.

Mr. Burns: A Post-Electric Play presents us in the literature of what would happen to our world? If there was a nuclear explosion.

There’s also a lot of powerful stories within the play of making people understand how their meaning is changeable of the survivor’s reminiscence the episode of “Caped Feare”, but they discover that their memory is unreliable while arguing back and forth over each other, a character appears named Gibson who gives information on what’s happening to the world, and its destruction, he gives them something suitable in their habitation. One of the essays of the play “Once Upon a Time “How Myths Evolve” deals with the change of the narrative of our stories shift to the world, and how it changes due to the fit of a generation. From medieval lore, Disney films, and other films that we’re currently watching in the modern world. Hence the reason why ancient myths in the proposed “Garden of Eden “are: the tree of knowledge. Logic clearly suggests that the tree is a metaphor. By consuming knowledge, we all join in a battle of good and evil. It presents us with a subject of freedom, and its enemies are touched on many aspects, and how to do justice? It reminds us about historical events such as Holocaust, Hiroshima, Nagasaki, the aftermath of Hurricane Katrina, it represents those catastrophes that we face as human beings, and how we’re going to survive those events if something bad is going to happen every twenty-four hours per week thinking of what’s going to happen to the world being invaded by a nuclear explosion, but who knows?

Brave New World was written on the after-effects of World War I during the great depression, a stock market crash in October 1929 when the Americans were extremely nervous about an impending financial disaster that leads to consumer spending or investment was going way down. Many people lost their jobs and suffered painfully. Leading to a result of President Franklin D. Roosevelt to recover his words and actions helped began restoring the people’s confidence back on their money. Society has shown us the loss of being unchanged due to “The Great Depression.” It was described as extreme variability, and it created fear for people in the society of the entire concept of civilization, a brave new world which can lead to eradicating under social pressure, and tyranny. The leaders of our society can lead to this of another economic collapse, and leaving everyone hopelessly to not pay their checks to the banks. The people in Brave New World are classified as a five caste: Alphas, Betas, Gammas, Deltas, and Epilson follow through with greater intelligence, and making society better in their vision.

Interestingly enough, the amount of pain and suffering isn’t present in Mr. Burns. It’s a weird thing to compare the two novels when you look at it from an anarchist perspective it created chaos in society. Freedoms were removed by new laws on unjustified hierarchies which defined as a hierarchy that is horrible among peoples. Such interpretation is primitive at best. In these worlds, we see the destruction of society and the collapse of the first world is upon those who dare not to be patient either for a dictatorship or disaster in the world. Brave New World focuses on the aspect of degeneracy such as trying to feel good over the products that people don’t really need whether they feeling high, feeling pleasure, and its habits. Not much can be said about Mr. Burns as their pleasure is only The Simspons. “No social stability without individual stability.” (Huxley 42) since society is collapsing the people must act in an unchanging way. We’re becoming more futuristic in the modern world, and its flaws of humanity to eliminating individual freedom. Seeking a steady society of many aspects of life: intelligence, creativity, the arts, and diversity.

Society has been defined by its social contracts such as that to the State or no state. It’s the reason to believe that societies with or without hierarchies are ironically the ones who have the most to tell in their story. And with knowledge can be used for good and evil of what is to be human? Is the question everyone keeps asking themselves is it our moral obligation? Is it our political act? The state is defined by human nature as it can be used to kill, destroy, censor, and even worse declare war. It can also be used for a force of good and protect the people, and how society serves us to be socially stable as a whole. However, a society with no state can function just as well with the usage of a direct government. The government doesn’t rely on the state to do its bidding. In Brave New World, the state gives off those for pleasure and live it off to be served and pleased. However, in Mr. Burns, the story of “Cape Feare” is used as a pleasure for survival as it was only is known and remembered. The iconography of The Simspons is enough to draw people together and play around with for pleasure. 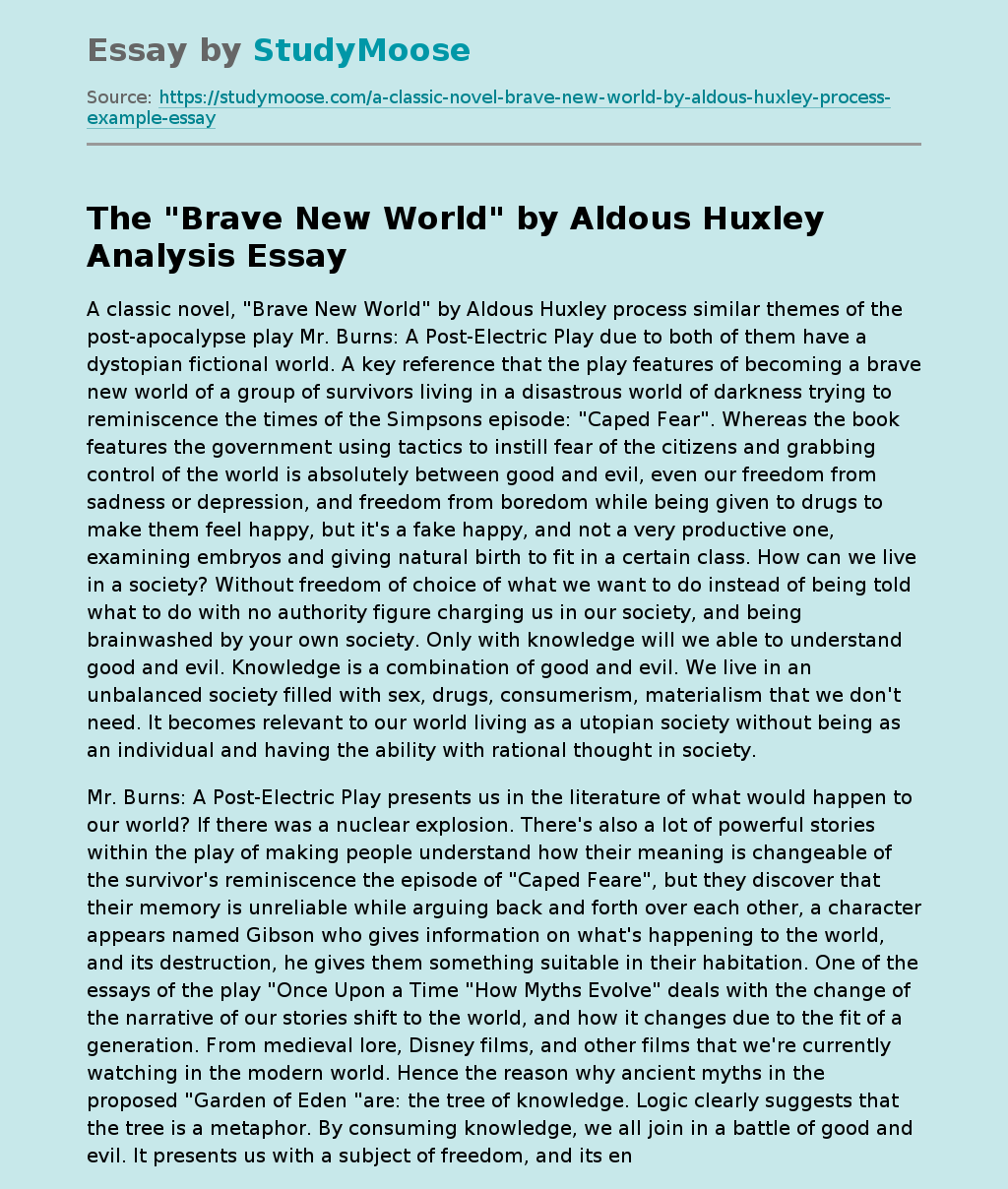