In the play The Merchant of Venice, by William Shakespeare, the character Shylock is a usurious Jew moneylender. Though Shylock is both a villain and a victim, the strongest evidence suggests that he is a villain. Bassanio, Antonio, Jessica, and Lancelot all see this.

In some ways, Shylock is presented as a victim of the anti-Semitic residents of Venice. In Scene 1 of Act III, Shylock is in court demanding that the penalty of his loan to Antonio be paid. He pleads:

He hath disgraced me, and

hindered me half a million; laughed at my losses,

mocked at my gains, scorned my nation, thwarted my

bargains, cooled my friends, heated mine

enemies; and what’s his reason? I am a Jew.

Don't use plagiarized sources. Get your custom essay on
“ A Character Analysis of Shylock as a Villain in The Merchant of Venice ”
Get custom paper
NEW! smart matching with writer

not a Jew eyes? Hath not a Jew hands, organs,

the same food, hurt with the same weapons, subject

to the same diseases, healed by the same means,

warmed and cooled by the same winter and summer, as

a Christian is? If you prick us, do we not bleed?

if you tickle us, do we not laugh? If you poison

Here, Shylock is referring to the injustices that the Jewish residents of Venice have been subjected to.

For instance, Jews in Venice are required to wear distinctive dark clothing so that they can be recognized as Jews. Also, the Jews are only allowed to take certain careers, one of which is money lending, because the Christians believe it to be a sin to lend money and charge interest.

The Jews also live only in certain parts of the city and may not be citizens. In the past, Antonio has also personally treated Shylock with contempt. He has lent money to other Christians interest-free so that they can more quickly repay Shylock, thereby decreasing Shylocks earnings. He frequently calls Shylock a cur and spits on his beard and clothing in public. His own daughter even runs away to marry a Christian with a lot of his money and valuables, she then becomes a Christian. There is certainly evidence to support Shylocks role as a victim in this play.

On the other hand, Shylock is very much a villain in the play. He treats his help badly by starving them and dressing them in ragged clothes. He treats his daughter harshly by over-protecting her. He loans money to Christians at high interest rates. For this reason, he is despised among the Christians of Venice, who see this as sinful. Also, Shylock has loaned Antonios friend Bassanio money on Antonios credit. It is obvious that Shylock plans to harm Antonio from the start. The penalty for not repaying this loan in time is a pound of Antonios flesh. Because Antonios money is tied up in ships at sea at the time of repayment, he is unable to repay the loan, and Shylock demands his pound of flesh. When Bassanio offers twice the principle in repayment to spare Antonios life, he replies harshly:

The pound of flesh, which I demand of him,

Is dearly bought; ’tis mine and I will have it.

If you deny me, fie upon your law!

There is no force in the decrees of Venice.

He cares only for taking Antonios flesh and shows no mercy, even when Portia, masquerading as a lawyer, appeals:

“The quality of mercy is not strain’d,

It droppeth as the gentle rain from heaven

Upon the place beneath: it is twice blest;

It blesseth him that gives and him that takes:

‘Tis mightiest in the mightiest: it becomes

The throned monarch better than his crown;

His sceptre shows the force of temporal power,

The attribute to awe and majesty,

Wherein doth sit the dread and fear of kings;

But mercy is above this sceptred sway;

It is enthroned in the hearts of kings,

It is an attribute to God himself;

Bassanio even goes so far as to offer ten times the principle, yet Shylock stubbornly insists on the agreed payment of flesh. It is clear that Shylock is a villainous character. He is a usurious lender and a vengeful collector. He shows no capacity for compassion.

In conclusion, the evidence showing Shylock as a villain is more compelling than the case for him being a victim. Although he is discriminated against, he is no better than those who persecute him. Wanting to kill someone in cold blood is quite a despicable act. His unwillingness to renegotiate Antonios debt and his unscrupulous lending tactics make him a detestable character.

A Character Analysis of Shylock as a Villain in The Merchant of Venice. (2021, Dec 07). Retrieved from https://studymoose.com/a-character-analysis-of-shylock-as-a-villain-in-the-merchant-of-venice-essay 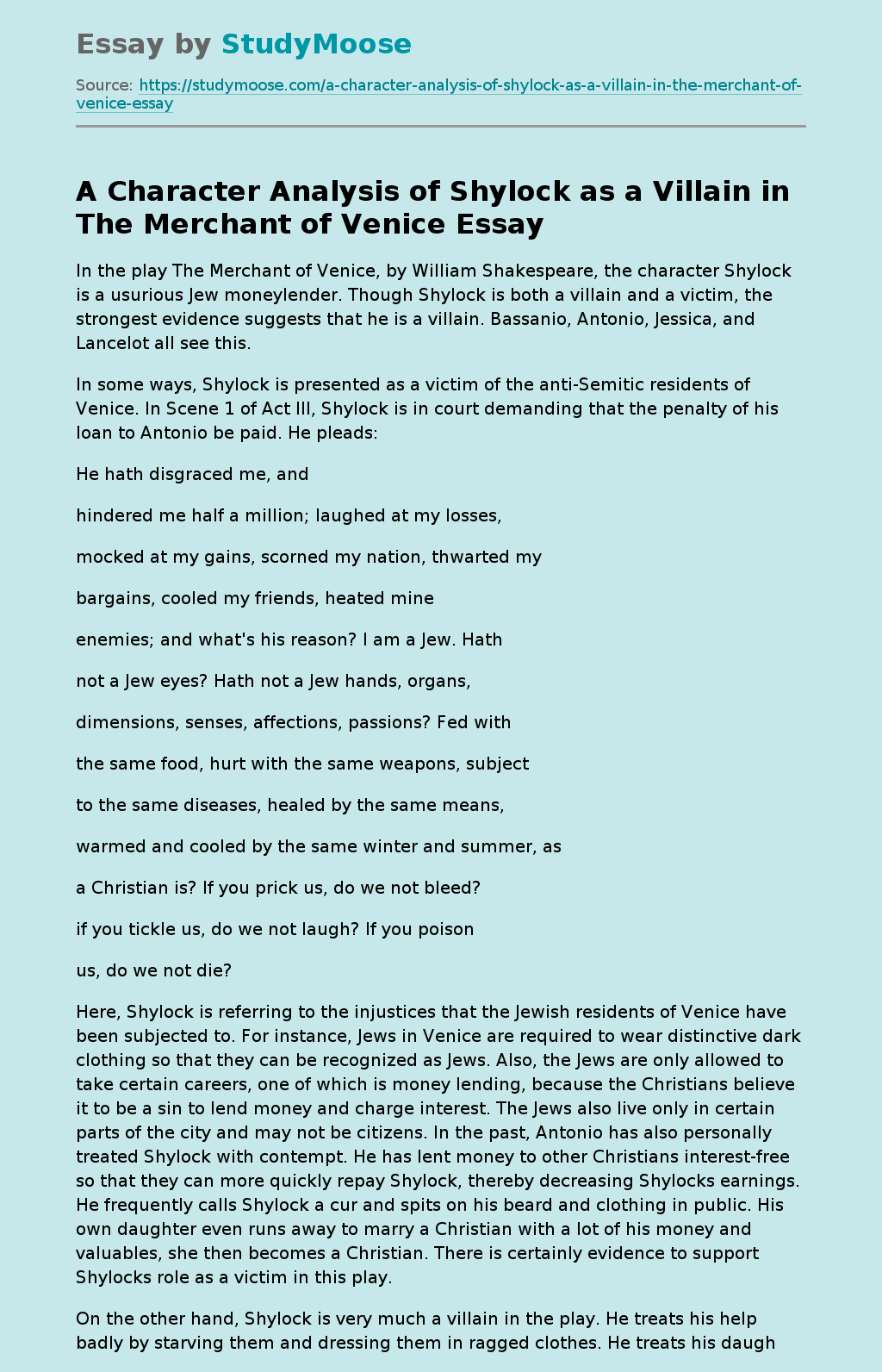