Large, crisp snowflakes fell gracefully from the skyline like dancing fairies. The taste of excitement lingered in the misty air. As the shop lit up like a Ferris wheel on a fair ground and as the door began to rotate, the ever-awaiting crowds stood brimmed with delight. They began to swarm the door like a gathering of bees. The pounding of enthusiastic footsteps shook the ground as if a herd of elephants had passed. Staff, who worked in military precision, warmly greeted the over joyed kids as they hastily dispersed into every nook and cranny within the store.

Turn in your highest-quality paper
Get a qualified writer to help you with
“ A Busy Toy Shop ”
Get high-quality paper
NEW! AI matching with writer

A newly appointed member of staff had Sapphire blue eyes that glinted in the light. Wavy blonde hair, that framed her face, blew in the breeze from the fan positioned by the counter. As red as Rudolph’s, the girl’s nose shone as her elderly grandmother wiped away the tiny water droplets that remained from the rivers that were once running down her bony cheeks.

Realising what her grandmother had just reluctantly paid for she began to smiled which brightened up her whole face. This was a commonly occurring sight with in the shop as the children laid there adorable eyes on the toy that later was to be their prey.

Clumsily scampering around the toyshop, most of the boys and girls took in the magical sights of what the shop had to offer. Where as some others clung like baby monkeys from their parent’s necks, as if the scary monsters from their bedtime stories were lingering around every line of shelves.

One innocent looking young boy was broken hearted at the thought of not being allowed the very bulky orange dumper truck that he had positioned in front of his unexpecting mother. 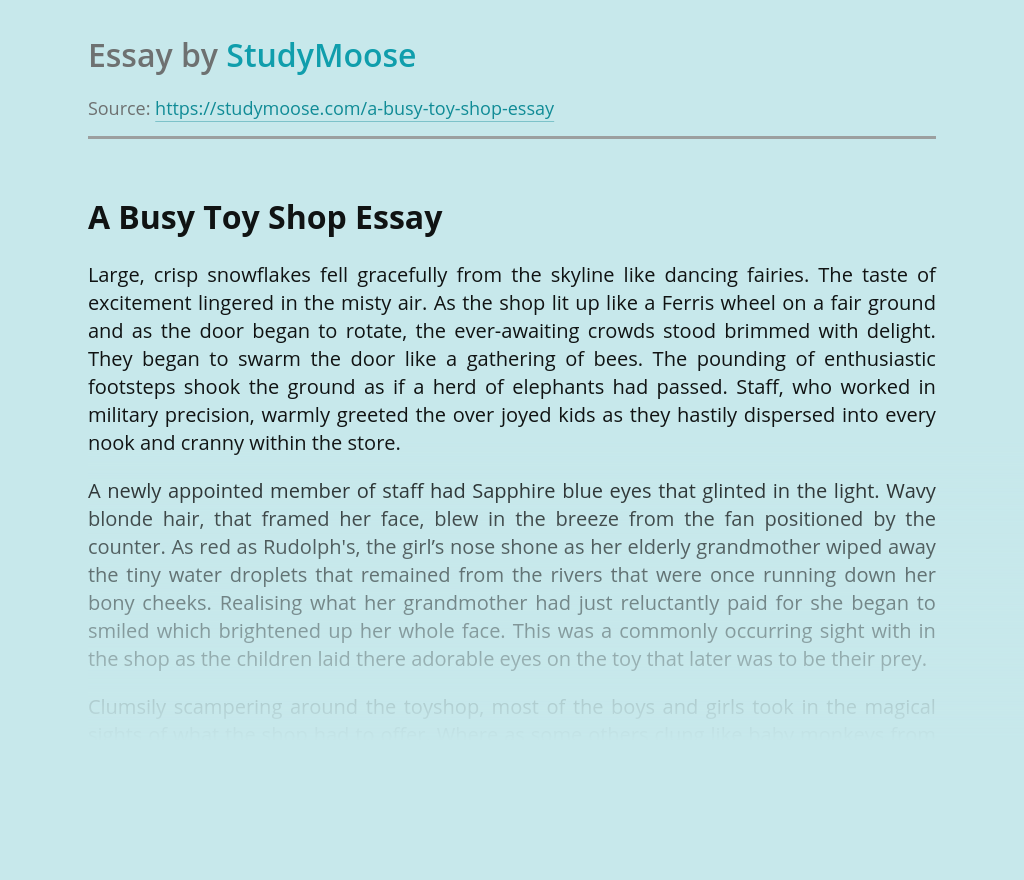 Turn in your highest-quality paper
Get a qualified writer to help you with
“ A Busy Toy Shop ”
Get high-quality paper
Helping students since 2015
Stay Safe, Stay Original