A brief history of entertainment

Entertainment is a keyword, when we speak about the spare time of modern people.

Anyway, entertainment is nothing particularly new on this globe…

The execution and use of entertainment has just developed, adapted to modern world and its spectrum has grown bigger. I think that entertainment is and was aroused when people were bored, and it seems to be a human’s habit to want to be entertained. Since humans are so intelligent and on top of the food-chain they have got more and more bored through time.

Turn in your highest-quality paper
Get a qualified writer to help you with
“ A brief history of entertainment ”
Get high-quality paper
NEW! AI matching with writer

Our x-great-grandparents, the stone-age-people, had already learned to entertain. They did it, probably by fighting, struggling and measuring forces on each other. Later on in world history humans have learned to tell stories, to sing, to act, – simple theatre was invented. At this time primitive games were also applied. Games had the advantage that their users were not only passively entertained but they could compete against each other and all be active. Theatre has since tat time been an important point in entertainment history.

Because people were very much separated in older times, things have developed differently in the different parts of the world. In Italy, Greece and France the theater styles were unusually different. These countries were leading the formation and the developing of modern theatre.

Nowadays the video film is mostly more common and liked by humans, than the theatre. The invention of the video began a hundred years ago… In 1885 the German Max Skladanowsky presented his so-called “Lebendige Bilder” in Berlin and the French Lumière brothers presented the so-called “Cinématographe” in Paris to a wider audience.

At that time films were made for science; and of course – entertainment!

It took another 40 years, until the foundation for modern cinema was made. The film “The Jazz Singers” was the first film with sound and voices. Warner Brothers already ruled the cinema business at that time. The film technique developed extremely fast; today we have an enormous bunch of film stars and an extreme amount of movies.

Later on another milestone of entertainment was invented. It’s called home entertainment and it began with the gramophone. After that the radio was invented. It struck like a bomb, because people could hear live news and music from home. Later on the T.V., the television, had its debut. Today we have so many possibilities of getting entertained, but the good old theatre is still there and the very simple games are to. That’s because they still have so much charm!

A brief history of entertainment. (2016, Jun 26). Retrieved from https://studymoose.com/a-brief-history-of-entertainment-essay 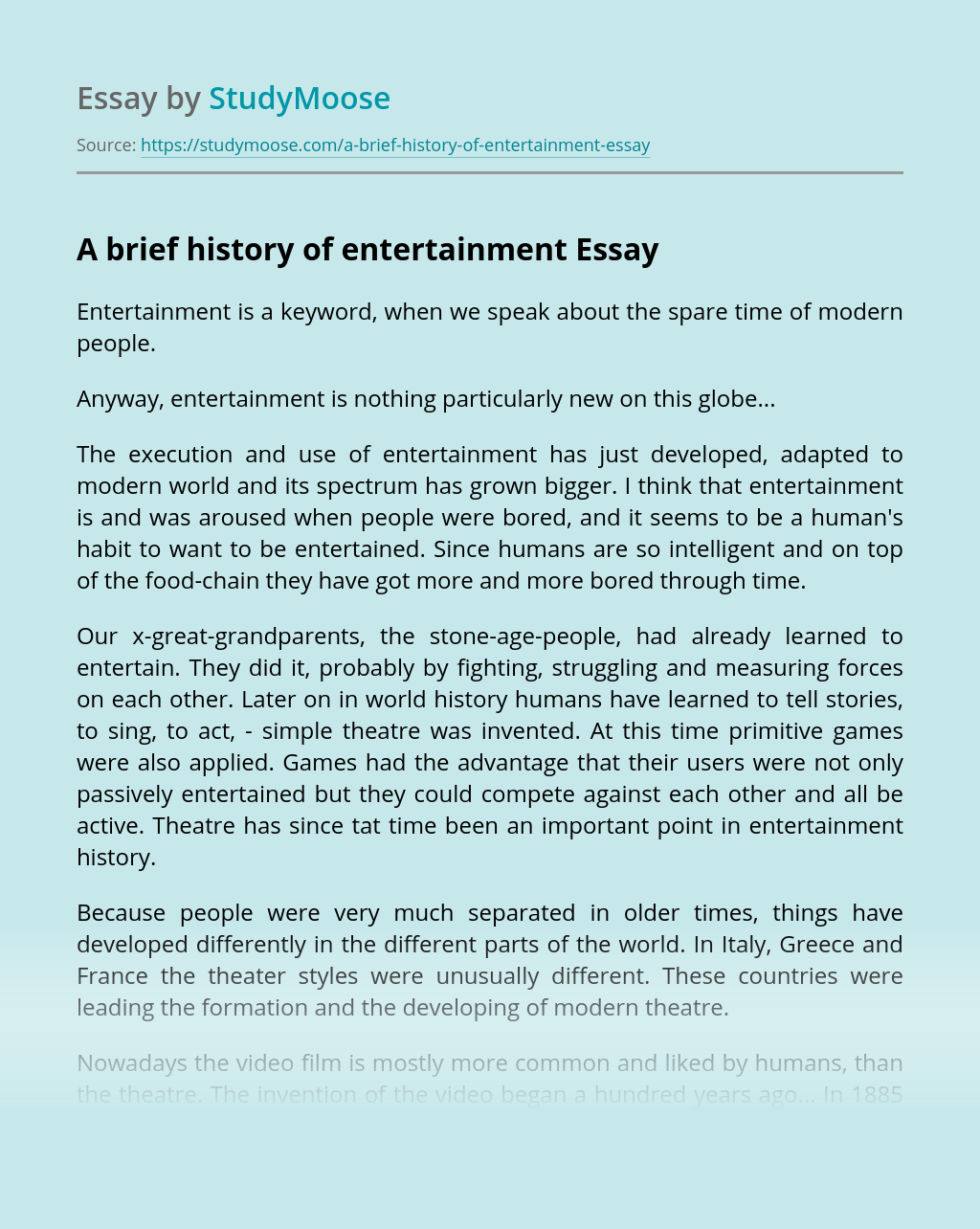 Turn in your highest-quality paper
Get a qualified writer to help you with
“ A brief history of entertainment ”
Get high-quality paper
Helping students since 2015
Stay Safe, Stay Original