A Brief about Mary Rowlandson's Life

Killed by disease and starvation, angered by English intrusion upon their land, and enraged by the English’s heavy-handed diplomacy, New England’s Indians struck back. Mary Rowlandson was the wife of a Puritan minister when, in February, the village was attacked by the Wampanoags. The Indians burnt down the village and killed or kidnapped its residents. Rowlandson spent nearly three months in captivity before being ransomed. Mrs. Rowlandson was able to persevere the hardships because she openly welcomed the challenges and struggles for change.

Don't use plagiarized sources. Get your custom essay on
“ A Brief about Mary Rowlandson’s Life ”
Get custom paper
NEW! smart matching with writer

Struggling through the months, Mrs. Rowlandson came to realize that she had a new perspective on the world. “I have seen the extreme vanity of this world: One hour I have been in health, and wealthy, wanting nothing. But the next hour in sickness and wounds, and death, having nothing but sorrow and affliction. Before I knew what affliction meant, I was ready sometimes to wish for it. ” Day to day life for Mrs. Rowlandson had become too safe, too dull.

She felt the need for change, and welcomed the opportunity to challenge herself.

Mrs. Rowlandson began to kindle the feeling of jealousy inside of her. She wanted what the New England Indian’s had. Namely, a challenge to overcome. The troublesome lives of the natives appealed to her because it provided the opportunity to conquer a new trial in her life. “…I should be sometimes jealous least I should have my portion in this life, and that Scripture would come to my mind, ‘For whom the Lord loveth he chasteneth, and scourgeth every Son whom he receiveth’ (Hebrews 12.

). ” For her, God was sending a test, a test that she would not fail. She saw this challenge as an act of God, and was determined to overcome it. Change is the key factor in Mary Rowlandon’s survival. She is determined to change a part of her life through this experience. Maximus Decimus Meridius from the movie Gladiator had the same mind-set. Betrayed by his king, and sent into slavery, he was adamant about conquering those who betrayed him.

He sought to fulfil the wishes of Marcus Aurelius, the true emperor of Rome, and convert the empire into a republic. He wanted to change the course of the empire, thus, changing his life. Mary Rowlandson needed to break free from the humdrum life she lived, and explore new ways of living. The English’s’ arrogance by forcing a war was the perfect opportunity for that freedom. She did not welcome the captivity, but she was determined to make the most of it for herself, and for her family.

A Brief about Mary Rowlandson's Life. (2018, Nov 14). Retrieved from http://studymoose.com/a-brief-about-mary-rowlandsons-life-essay 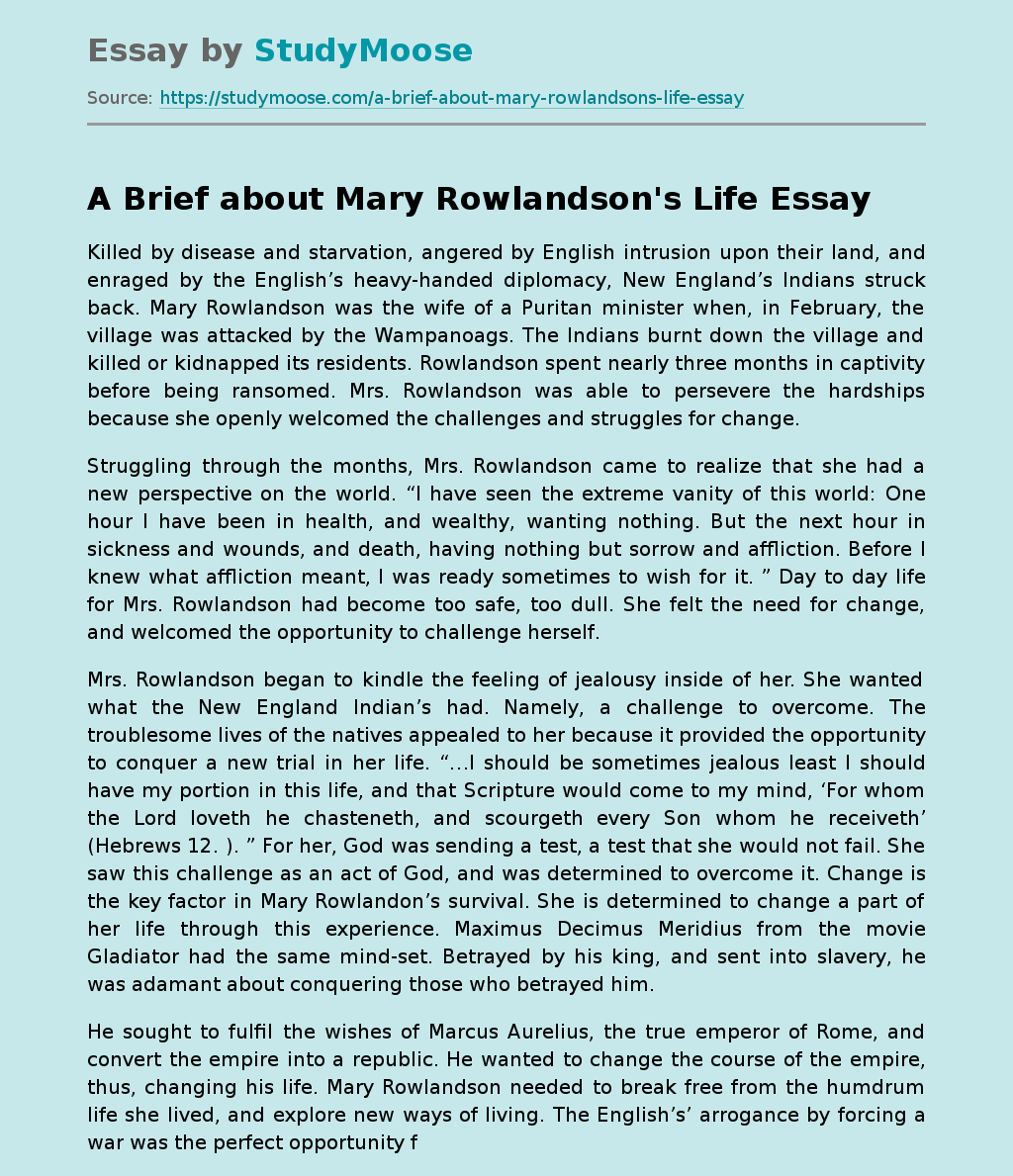