A Book Critique of The Advancement: Keeping the Faith in an Evolutionary Age

In L. Russ Bush’s Christian apologetic work, The Advancement: Keeping the Faith in an Evolutionary Age, he details the development and apparent fallacy associated with the modern naturalist worldview. Bush, a professor at Southeast Baptist Theological Seminary, focuses on the idea of inevitable progression within the modern worldview and provides an overview of this view’s promulgation within epistemology. Bush asserts Christians are no longer socially the majority in their beliefs regarding a world created by God and thus the civil authorities are no longer there to protect their beliefs, as in centuries past.

Don't use plagiarized sources. Get your custom essay on
“ A Book Critique of The Advancement: Keeping the Faith in an Evolutionary Age ”
Get custom paper
NEW! smart matching with writer

Therefore, it is critical to have a Christian response to modern naturalism. Bush approaches this evolutionary worldview from a philosophical perspective and not as a scientist. The goal of his thesis is not to convince the reader of the scientific merits of Christianity, but to expose the erroneous beliefs found in the modern naturalistic worldview when compared to Christianity.

Bush’s overall purpose in this book is to show the failings of the modern naturalist philosophy, especially when compared to the truths found in biblical Christianity.

Bush organizes his exposition into eight chapters, which sets out to dismantle the modern naturalistic worldview. Early on within the book, Bush adopts the phrase “Advancement” which he uses to describe the naturalistic philosophy for inevitable progress within the modernist worldview. Advancement, as Bush explains, is an applicable term for both modernist and post-modernist philosophies. The modernist worldview blends natural historic development with inevitable progress and Bush describes this view is moving into uncertainty, because of its relativistic nature that only lead to chaos.

Bush traces these worldviews throughout human history and details the development of modern naturalistic thought. The book reveals humanity’s view of epistemology has changed from the view of a world created by an all-powerful creator God to a random creation brought on by a series of happenstances, which lead to the creation of all life that inhabits the world.

The author defines the modernist worldview through the philosophies of Plato, Aristotle, and up through the enlightenment philosophers of the eighteenth and nineteenth centuries. Furthermore, Bush compares the significant differences between the Christian and modernist worldview. This comparison reveals instability is found in the relative naturalistic worldview, and stability is present in Christianity. The Advancement focuses on the unchanging God of the Bible who offers stability unlike naturalism, which only offers inevitable chaos. Bush details the rise of the scientific method and Darwinian evolution within progressive society, which inaugurates the decline of the Christian majority in modern society. The result of the advancement thought process created a theme within society that God was no longer in existence or that God had died. The process of events within the history of the world began to be viewed as the results of accidents within a complicated process. Bush details under the modernist worldview there is no objectivity because the mind is merely a result of random processes.

Moreover, Bush notes the turning point from a dominion Christian worldview to the naturalistic worldview began with the introduction of Deism within the church. The author presents the theological ramifications of blending the Christian faith with naturalism in an attempt to reconcile the two worldviews. According to Bush, the fallacy in the modern worldview is exposed through his presentation of the “Ten Axioms of Modern Scientific Thought.” These axioms define how modern naturalism understands reality and how other sciences build their assumptions on its data. Bush concludes his book by detailing the reason why the advancement worldview must be rejected in light of the biblical worldview. Bush writes the antidote for the effects of the advancement worldview is authentic Christianity. The stability of Christianity is the only answer to the relative and erratic naturalist view.

Bush’s thesis within his book was the view that stability is found in the biblical view of the created world, which presents itself in rational order. Bush argues the naturalistic view relies on changing and erratic scientific reason, which creates an environment of instability. The Advancement disassembles the philosophy of naturalism in a matter that can be easily understood by those outside of academia.

The Advancement presents several strong arguments regarding Bush’s claims on modern naturalism. Bush’s strongest argument lies within his view that the modern naturist worldview as relative and deceitful. The presentation of the logical conclusion of the evolutionary worldview, which led to the Nazi movement in Germany, was an extremely powerful way to expose the logical trappings of this advancement mindset. The gauge in which humanity views its progress and achievement through naturalistic thought is subjective and skewed to this atheistic philosophy. Bush unveils advancement thinking as false by revealing the lack of inevitable progress within human history. The continued advancement of science and technology does not create the utopian world envisioned by those who proclaim the modern naturalist worldview.

Bush smartly presents the problem with medicine that despite the great achievement perceived by humanity there is still the presence of disease equal to the levels in times past. Bush’s use of the “Ten Axioms of Modern Scientific Thought” defines the science of naturalistic thinking and demonstrates how other scientific disciplines build their assumptions regarding evolutionary theory, which is based on this data. Another strength Bush presents can be found in his final chapter when he presents Jesus Christ as Lord. Bush finalizes his apologetic in a matter that every Christian should end with when engaging in apologetics, which is a focus on Christ. Bush presents Christ as the focus of truth regarding God and the world. This presentation of Christ gives those engaged in the apologetic argument a chance to hear the gospel and understand the absolute truth found in Christ.

However, The Advancement presents several weaknesses, which may be difficult for a reader to understand regarding the themes within Bush’s book. Bush uses multiple terms, often interchangeability, for his invented term “Advancement.” “Advancement” defined by Bush describes a hybrid of naturalistic modern thinking, but Bush does not utilize this term throughout the book. Moreover, the term used in the subtitle of this book the “evolutionary age” is not clearly defined or used, which may provide a level of confusion for those unfamiliar with the term.

Bush alludes to a post-Christian age in which the creationist view held by many within the western world has fallen to the wayside for the modern view of naturalistic evolution, but he does not expressly use the term evolutionary age. Although, this is not a scientific book Bush does not define the advancement sciences that have led modern society away from God. A Christian should be able to use this book to engage in an apologetic debate on the philosophical grounds of modern naturalism with an evolutionist and be able to expose the fallacies and ramifications encapsulated within that worldview. However, Bush’s work would not be applicable for a scientific debate on the merits of creationism verse evolutionary theory.

The Advancement: Keeping the Faith in an Evolutionary Age presents a valuable and sound argument for the Christian worldview when compared to the worldview of modern naturalism. This book answers questions for those interested in the failings of modern naturalism when compared to Christianity and defeats the idea of man’s inevitable advancement within this worldview. The naturalistic worldview incorrectly measures scientific and technological advancements and claims these advancements are progressing for the betterment of humanity.

Bush assaults the ideas of natural theology by revealing the lack of inevitable progress. Furthermore, he reveals the tradition Christian view of God and the world can be compatible with science. This book would be a value for any student of apologetics, who is interested in an introduction into the deception of a modern naturalistic worldview. However, this book does not provide the detail needed to argue from a scientific position on the merits of the Christian understanding of nature and the created world.

A Book Critique of The Advancement: Keeping the Faith in an Evolutionary Age. (2016, Apr 10). Retrieved from https://studymoose.com/a-book-critique-of-the-advancement-keeping-the-faith-in-an-evolutionary-age-essay 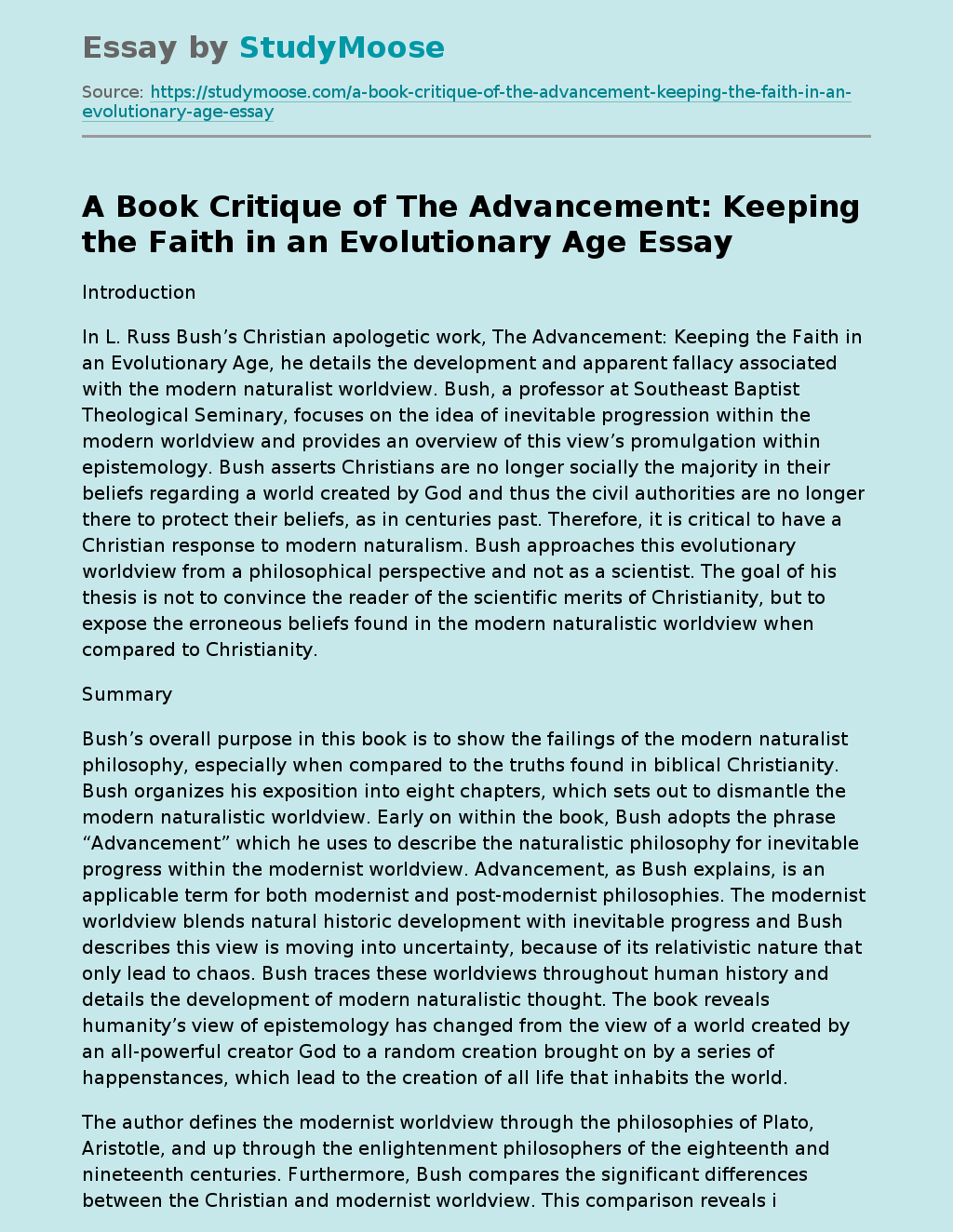