A Biography of the Mathematician Emilie du Chatelet

Emilie du Chatelet grew up in a society where there were not many education opportunities for women. She was born in Paris on December 17, 1706 and grew up in a household where marriage was the only way one could improve their place in society.

During her early childhood, Emilie began to show such promise in the area of academics that soon she was able to convince her father that she was a genius who needed attention. Provided with good education, she studied and soon mastered Latin, Italian and English.

Don't use plagiarized sources. Get your custom essay on
“ A Biography of the Mathematician Emilie du Chatelet ”
Get custom paper
NEW! smart matching with writer

She also studied Tasso, Virgil, Milton and other great scholars of the time. In spite of her talents in the area of languages, her true love was mathematics.

Her study in this area was encouraged be a family friend, M. de Mezieres, who recognized her talent. Emilie’s work in mathematics was rarely original or as captivating as that of other female mathematicians but it was substantive. At the age of nineteen she married Marquis du Chatelet.

During the first two years of their marriage, Emilie gave birth to a boy and a girl, and later at the age of 27 the birth of another son followed. Neither the children or her husband deterred her from fully grasping and indulging in the social life of the court.

Some of Emilie’s most significant work came from the period she spent with Voltaire, one of the most intriguing and brilliant scholars of this time, at Cirey-sur-Blaise. For the two scholars this was a safe and quiet place distant from the turbulence of Paris and court life.

She started studying the works of Leibniz but she then started to analyze the discoveries of Newton. She was extremely success in translating his whole book on the principals of mathematics into French.

She also added to this book an “Algebraical Commentary” which very few general readers understood. To realize the significance of her work for future French scholars it is important to understand the social context within which she lived and worked. One of Emilie’s most significant tutors was Pierre Louis de Maupertuis, a renown mathematician and astronomer of the time. The struggle for success did not come easy even for Emilie. As a student her curiosity and unrelentedness caused her to place impossible demands on her tutors. Such nature caused her to engage in dispute with her tutor at the time, Samuel Koenig. Their dispute was about the subject of the infinitely small which ended their friendship. In 1740 when Emilie’s book Institutions de physique was published, Koenig started a rumor that the work was merely a rehash of his lessons with her.

Of course this mad Emilie very angry and for help she turned to the Academy of Sciences and Maupertuis, with whom she had discussed there ideas long before she engaged Koenig as her tutor. The intelligent scientists of the time were aware of her capabilities of performing the work. However she did not feel that she had received the support she deserved. This was the first time that she felt that being a woman really worked against her. The years Emilie spent with Voltaire at Cirey were some of the most productive years of her life. Their scholarly work was very intense. When there were no guests both of them stayed at their desks almost all day long. In the spring of 1748, Emilie met and fell in love with the Marquis de Saint-Lambert, a courtier and poet.

This affair did not destroy her friendship with Voltaire. Even when she found out that she was carrying Saint- Lambert’s child, Voltaire was there to support her. Along with Voltaire and Saint-Lambert, she was able to convince her husband that it was his child she was carrying. During the course of her pregnancy in 1749 she finished her work with Clairaut, an old friend with whom she had been studying, but her book on Newton was not completed yet. She was determined to finish it and with that goal she took on a very regimented lifestyle of only work. In early September of 1749, she gave birth to a baby girl. For several days, Emilie seemed happy and healthy.

On September 10, 1749 she suddenly died. Emilie’s death was soon followed by the death of the baby girl. Emilie died at the age of 43. Among her greatest achievements were her Institutions du physique and the translation of Newton’s Principia, which was published after her death. Emilie du Chatelet was one of many women whose contributions to the field of mathematics are still felt today and helped shape the course of mathematics throughout history. Bibliography 2 sources on the Internet Encyclopedia Britannica

A Biography of the Mathematician Emilie du Chatelet. (2020, Jun 02). Retrieved from http://studymoose.com/a-biography-of-the-mathematician-emilie-du-chatelet-essay 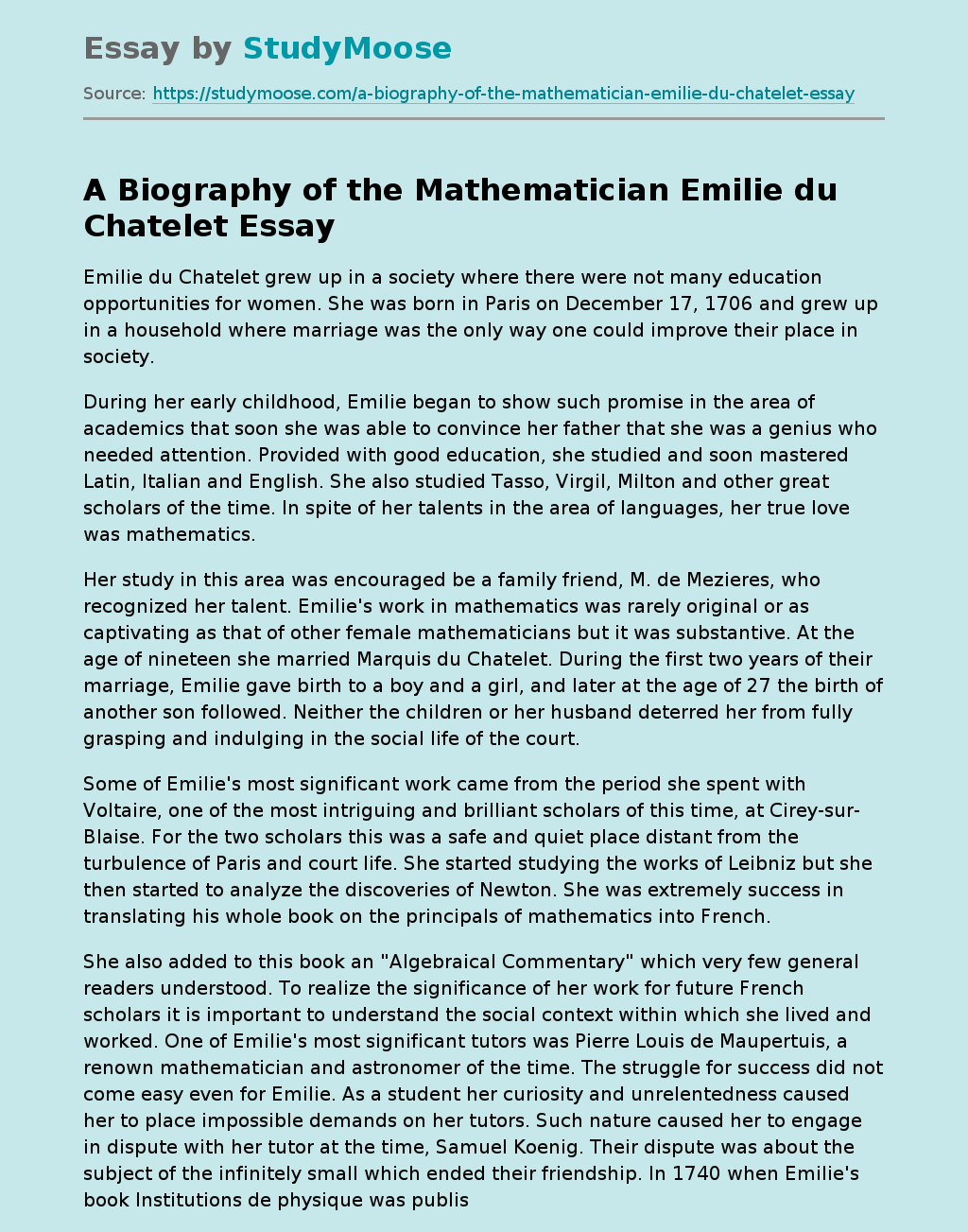