The movie “A beautiful mind” is the true story of John Nash. He was a famous mathematician who won the Nobel Prize in economics for his work on “the mathematics of game theory” (Nowak, 2015) and also well-known for his struggle with schizophrenia. The movie spans from the time he arrived at the Princeton University as a graduate student, his time at the prestigious Massachusetts Institute of Technology (MIT) where he met Alicia his student who later became his wife, and up until when he won the Nobel Prize.

Don't use plagiarized sources. Get your custom essay on
“ A Beautiful Mind Movie Review ”
Get custom paper
NEW! smart matching with writer

This paper takes a look at the main character, John Nash who is depicted as a schizophrenic in the movie Vis a Vis the criteria for schizophrenia.

According to the American Psychiatric Association, “Schizophrenia is characterized by delusions, hallucinations, disorganized speech and behavior, and other symptoms that cause social or occupational dysfunction” (American Psychiatric Association, n.d.). The Diagnostic and Statistical Manual of Mental Disorders, Fifth Edition (DSM-5) (Townsend, 2014) outlines five main criteria (A-F) under which schizophrenia can be diagnosed.

Criterion A states that the patient must exhibit two or more of positive symptoms (one of which must be either delusion, hallucinations, or disorganized speech) and negative symptoms for a month unless treated. John’s symptoms satisfied the criteria in that he had hallucinations and delusions. John’s room in Princeton was meant for a single occupant, but he had a roommate, Charles who was studying literature and later became his best friend. It was later on in the movie at the height of his illness that we get to see that Charles was actually a hallucination.

Another hallucination was Parcher, the government secret agent and this led to his delusion. He believed the government through Parcher, hired him to decode secret messages from the enemy in newspaper and magazines, this was because he had been able to decode secret messages intercepted from the enemy. This mission took over his life, affected his personal relationships and made him suspicious of all. There was a scene he had to send his pregnant wife away from the house during the night because he felt someone was after him and she was getting in the way.

John also exhibited negative symptoms such as social discomfort, avolition and ideas of reference. In one of the scenes, Charles asks John why he does not have friends. He replied that “I don’t much like people, and they don’t much like me” (Grazer & Howard, 2001). His delusion made him feel he had no will of his own and so had no option but to do all that was necessary to protect his secret mission. Years of having delusions and hallucinations, means that criteria C for schizophrenia diagnosis is fulfilled. Criteria C necessitates that the symptoms exhibited in criteria A lasts for more than six months.

Criteria B requires a significant decline in level of functioning since onset of the disturbance. All through the movie, we see John’s level of functioning decline, like when he was at Princeton University, he would not go to class because he was pursing an original idea. He also had to resign his post at the prestigious Massachusetts Institute of Technology (MIT) to get treatment. Criteria D requires that we rule out schizoaffective disorder and depressive/bipolar disorder. Both schizophrenia and schizoaffective disorder have the same symptoms but differ in that schizoaffective is accompanied by a major mood disorder. The movie did not depict John as having mood disorder such as depression or mania but rather one whose social and personal relationship suffered due to his psychotic symptoms. There was no mention of him being diagnosed with any other ailment before arriving at Princeton or having autism in the movie so the criteria F was satisfied. 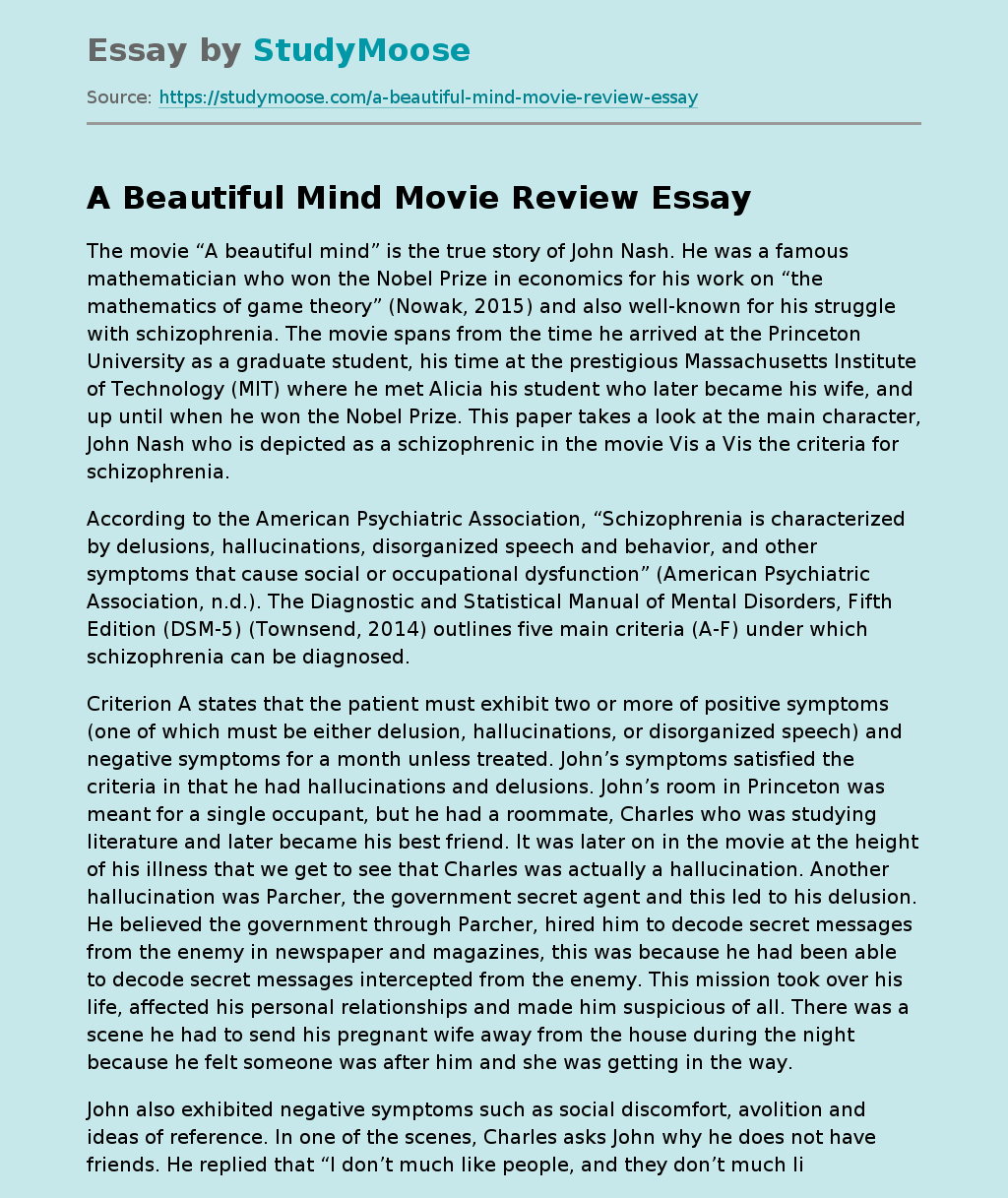