A Ban on Books Can Ruin Our Lives

I decided to do my PBL on the book The Hate U Give, written by Angie Thomas. The story consists of a sixteen-year-old black girl, Starr Carter, who witnesses the killing of her childhood friend Khalil. They both attend a party together and reconnect after a long time. Later, Khalil offers to give Starr a ride home. However, they are pulled over by a police officer who searches unarmed Khalil and eventually shoots him as he opened the door to ask Starr if she was okay.

Don't use plagiarized sources. Get your custom essay on
“ A Ban on Books Can Ruin Our Lives ”
Get custom paper
NEW! smart matching with writer

This incident shakes Starr and acts as the beginning of all the new things she is going to soon experience.

There are many controversial issues in the book due to which it has been challenged and banned in many places. There are contents related to police brutality, profanity, racism, drug use, explicit language, and violence. The Hate U Give has been banned in Wando High School and Charleston County High School in 2018. In spite of the fact that the book has many controversial topics, it also has numerous values which are important for society to know about.

The Hate U Give has many prominent themes throughout the book. The major themes seen in the book are injustice, bravery, community, race, and speaking up. There are many things present in the book with great importance towards society. For example, the book is based on a very contemporary controversial issue: the shooting of black men by the police. This perspective of the book enables the readers to see the other side of the story, apart from what television and social media portrays.

Also, the book gives an exceptional insight into the lives of the minority people, especially the youth as to how they live their daily lives while facing all the issues present in society. Moreover, Angie wrote her book in a very descriptive and believable manner which increases the ability for readers to connect with the story and genuinely understand the racism and injustice present in society.

While planning my PSA on The Hate U Give, I knew I had to do something that would reach out to people and encourage them to read banned books to understand their importance in society. I wanted to reach my audience, the students and faculties of my school, but I did not want to overdo the project that their attention would go towards only the appearance of the project and not the vital content. My goal was to motivate at least one person to pick up a banned book and see what the author has to say. I wanted my fellow peers to broaden what they read, instead of only reading what the teacher assigns.

I made a poster about the importance of reading banned books, by focusing mainly on The Hate U Give. The heading was the title of the book, the border consisted of many drawn books around the entire poster, and the center was a drawn picture of the cover of the book. I included a simple summary of the book and its importance in society. The project was also crafty as I added pop-up symbols. Lastly, I added a few eye-catching slogans, such as “Words have power, leave no page unturned,” “Defend the first amendment, read a banned book,” and “Stand up for your right to read.”

I really enjoyed working on this PBL because as I tried to reach out to people about the importance of banned books, I was truly able to comprehend the value they hold in society. It has changed my perspective on many things and has enabled me to view things differently. I believe that I was successful in reaching out to people as they viewed my project in the Media Center. A few people told me that they really liked my creativity and the things I had written. If I ever get the chance to do something like this again, I would like to make a few changes. I would want my project to be more interactive so that my audience can engage more with the display and be able to learn more.

A Ban on Books Can Ruin Our Lives. (2021, Dec 08). Retrieved from https://studymoose.com/a-ban-on-books-can-ruin-our-lives-essay 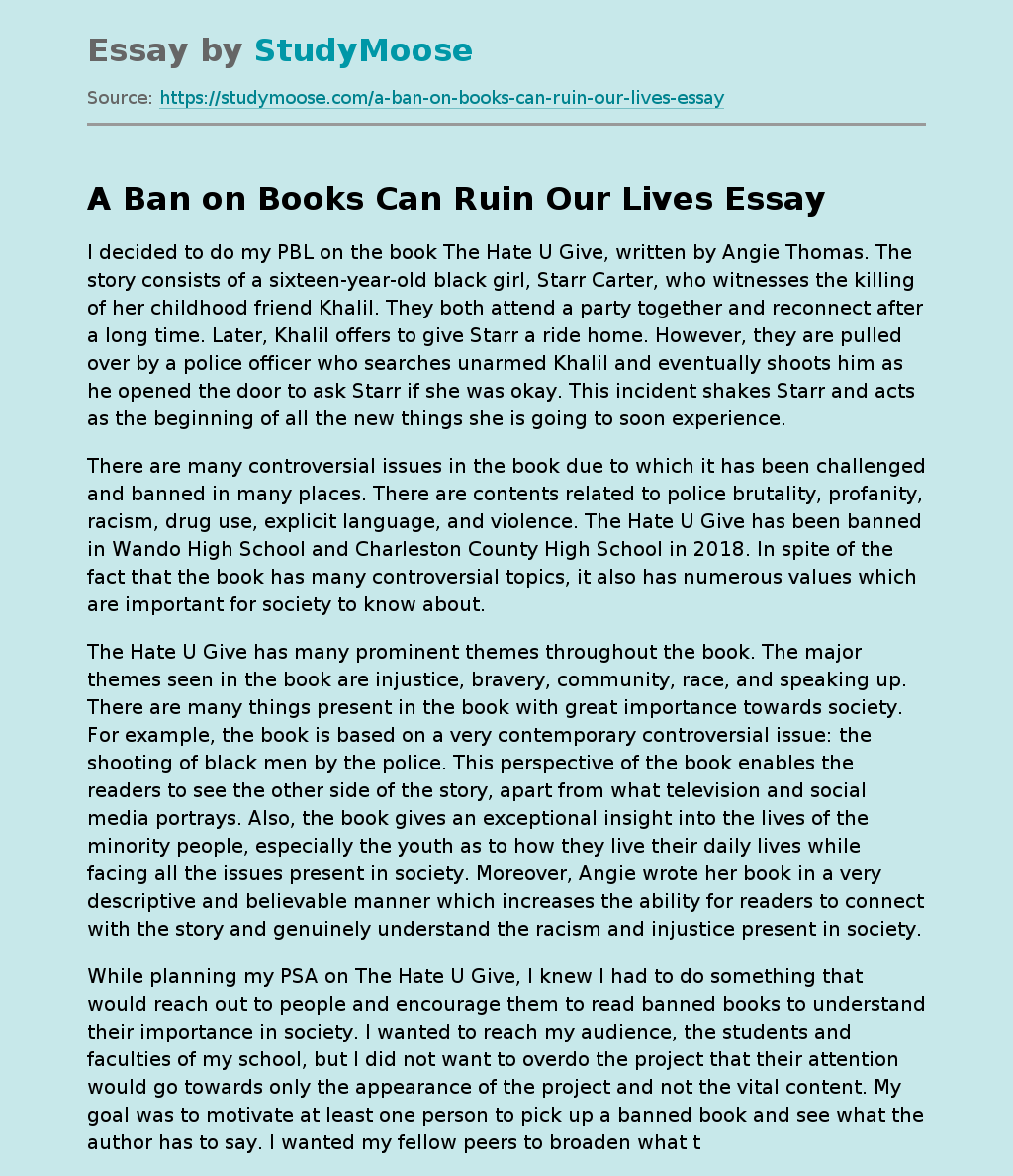