To Kill A Mockingbird: Childhood Experience

A kid or a teenager who has experienced maybe a family death or witnessed a terrible event might become more mature because their experience made them more mature. In To Kill A Mockingbird by Harper Lee, Jem and Scout grow and mature through experiences.
In To Kill A Mockingbird by Lee Harper, Scout and Jem grow and mature through experiences with Boo Radley. When she passed the Radley house for school, Scout felt sorry for Boo. “I sometimes felt a twinge of remorse when passing by the old place, at ever having taken part in what must have been a sheer torment to Arthur Radley” (Lee 324.

Don't use plagiarized sources. Get your custom essay on
“ To Kill A Mockingbird: Childhood Experience ”
Get custom paper
NEW! smart matching with writer

) Scout had matured enough to know what they had done to try and communicate with Boo, had quite possibly been torment. She felt almost ashamed of their antics. After Bob Ewell had attacked Scout walked Boo back to the Radley house. “Atticus was right. One time he said you never really know a person until you stand in his shoes and walk around in them.

Just standing on the Radley porch was enough” (374.)

Scout had always wondered what kept Boo in the house, and now that she had walked around in his shoes a little bit she started to understand more. Jem took the verdict of the trail hard, and Scout struggled to understand. “Naw, Jem, I think there’s just one kind of folks. Folks.”… “If there’s just one kind of folks, why can’t they get along with each other? If they’re all alike, why do they go out of their way to despise each other? Scout, I think I’m beginning to understand something.

I think I’m started to understand why Boo Radley stayed shut up in the house all this time. It’s because he wants to” (304.) A part of growing up is realizing that the world’s not a pretty place and not everyone’s a nice person. Jem realized this with the outcome of the trial, he knew the verdict was unjust and Tom was convicted guilty simply because of people’s racial prejudice. Jem wonders why and how they could have done it. He thinks about it and instead of using a silly child’s story as to why Boo stays in the house, he starts to think that maybe this injustice in the world is the reason why Boo stays in the house. He thinks that maybe Boo wants to stay in the house because he also thinks the prejudice and unjust views of society are unfair and discriminatory.

In To Kill A Mockingbird by Harper Lee, Jem and Scout grow and mature through experiences with Tom Robinson’s trial. After the verdict of the trial, Jem is angry at the injustice. ”It was Jem’s turn to cry. His face was streaked with angry tears as we made our way through the cheerful crowd. “It ain’t right” he muttered” (284.) Jem knew that Tom was innocent, he also knew that everyone else knew he was innocent, yet because of their racial prejudice, Tom was convicted guilty. Jem see’s this injustice and is greatly upset by it. Jem had matured enough to know it’s not right when the majority of the adults there didn’t and Scout just brushed it off. The trial led to Jem maturing and knowing people aren’t always good people. Scout, Miss Maudie, and Aunt Alexandra were given the news about Tom’s death while Aunt Alexandra was hosting a tea party. “After all if Aunty could be a lady at a time like this, so could I” (370.) Instead of throwing a temper tantrum or pouting and crying, like a kid her age might, Scout decides to act with maturity and dignity, just like Aunt Alexandra and Miss Maudie and return to the tea party. After the Bob Ewell attack, Atticus talks to Scout about what happened. “Scout,” He said. “Mr. Ewell fell on his knife. Can you possibly understand?” . . . “Yes sir, I understand,” I reassured him. “Mr. Tate was right.” Atticus disengaged himself and looked at me. “What do you mean?” “Well, It’d be sort of like shootin’ a mockingbird wouldn’t it?” (370.) Scout, still a young child, was mature enough to understand the situation and reassure Atticus, who was probably under a lot of strain and stress that night. Also by using the analogy “it’s sort of like shootin’ a Mockingbird” Scout shows she paid attention to Atticus and Maudie when they told her that shooting mockingbirds is a sin.

In To Kill A Mockingbird by Harper Lee, Jem grows and matures through life experiences. Scout tried to fight Walter because he made her start off on the wrong foot at school. “Come on home to dinner with us Walter” he [Jem] said “We’d be glad to have you” (30.) Scout angry at getting in trouble, childishly tried to fight Walter. When Jem got her off of him, Jem invited Walter to eat lunch at their house with them. Jem understood why Walter couldn’t afford lunch and wanted to help him. After the trial Dill, Jem, and Scout visit Miss. Maudie. “There should have three little ones. It was not like Miss. Maudie to forget Dill, and we must have shown it. But we understood when she cut from the big cake and gave a slice to Jem. (288.) The trial is when Jem lost his innocence of childhood, his “coming of age” in a sense. In a way, he “killed a Mockingbird” because mockingbirds are innocent, and the trial “killed” Jem’s childhood innocence. Miss. Maudie knows this, hence why Jem gets a slice from the big cake, the “adult cake.” He had matured past, his own little cake, unlike Scout and Dill. Scout finds Dill under her bed after he ran away from his parents in Meridian. “Jem was standing in a corner of the room looking like the traitor he was. “Dill I had to tell him,” he said. “You can’t run three hundred miles off without your mother knowin’.”(188.) While Scout would have kept it quiet, and kept her friends secret, Jem was mature enough to know that nobody knowing where Dill was was dangerous and scary. He knew it was irresponsible of Dill and that he should tell Atticus and did. Jem didn’t do it to tattle he did it for Dill’s safety, like a mature adult.
Scout and Jem grew and became more mature through the things they experienced, they used possibly bad experienced and learned how to act maturely from it. A part of growing up and “coming of age.” 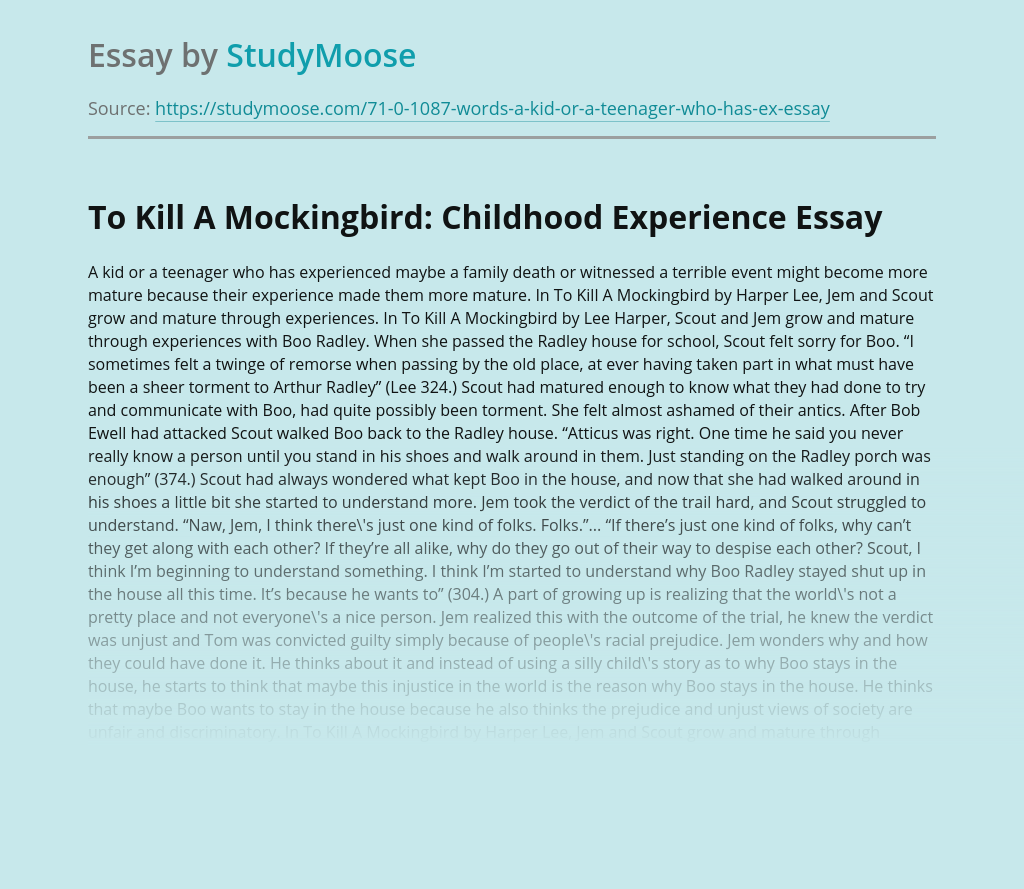