Neil in his article presents the seven different ways music influence human beings’ mood and emotions in the world. Having no souvenir traces of its real origin but just paintings discovered in caves and some jewelry, it lets scientists believe that all that happened deliberately for a reason. Through those beliefs, scientist seems to assert that music affects our emotions in the ways that aid in the intercommunication and consolidation of people in groups. He also mentions that generally, people react to music depending if it’s pleasant or not also if it’s active or dormant: a fact elucidates by professor Adrian North.

Don't use plagiarized sources. Get your custom essay on
“ 7 Ways Music Affects Your Mood and Emotions ”
Get custom paper
NEW! smart matching with writer

This information is very interesting and truthful to me because when we listen to music it transmits a specific message and depending on the message the soul will decide to receive; we will react to it conscientiously and sometimes unconscientiously. Music as explains in this article by Neil affect human beings in seven ways. Those different ways include that music has a great impact on brain, it plays a role of mood lifter and motivator, it reduces the levels of stress, changes the perception of things, influences the memory and is used as a therapy instrument.

Having an impact in many components of our brain such as the hippocampus, prefrontal cortex, and parietal lobe, music is used for treatment against anxiety and depression. Those different parts are also in charge of people emotion and moods. As example mention in the article, the prefrontal cortex alias “seat of good judgment” play the role of supervisor of our utmost impulses which usually allow us to control our actions and act diligently.

Music also considered as the booster of the mood help people to get a feeling that everything will be fine with some gaiety went the encounter hardship that affects their emotional state. this mood-boosting is made possible by some hormones that music helps the body to produce. Those hormones include serotonin alias happiness hormone, norepinephrine creator of euphoria and the neurotransmitter dopamine and are also essential in the treatment against anxiety disorder and depression. Throughout the explanation of how music lift people mood Neil mentioned some example proving it. Those example include the 2013 study inside the positive Psychological journal were they discovered that in just fourteen days people can recuperate from bad humor by listening to uplifting music, the research project named orchestra effectuated by scientists coming from the Bournemouth University Dementia Institute in the country UK were they demonstrate that patients having the disease dementia also have the abilities to acquire new capacities. Thus, as Anthea Innes mention music at some point no matter how we use it had an influence on every human being and can make visible our true and best personality. I agree with her because I considered music as my best friend. It already had an impact in me many times; people sometimes tell me that they enjoy watching me listening to music or dancing may be because I show the best of me and enjoyed it so much and probably because they could feel the energy of joyfulness in me.

Also considered as a motivator, the particularity of music is the message and power its words transmit who motivate people to accomplish great things. For example, for me when I listen to religious uplifting music it motivates me to grow my faith in God, follow his commandment and always do his will because everything he does is good. As mention in Neil article, it is advised to listen to uplifting song with inspiring message and incentive strength. Music also impacts people by reducing their levels of stress. The ability of music to decrease our quantity of stress is effectuated in our tense muscle when we listen to relaxing and calming melody. Known as a perception changer, music can transport people from a sadness state to a cheerfulness state. The power of music in our soul and mind is so tremendous, that’s why many people turn to music when they encounter hardship it helps us realize the positive part of why things happen in life because everything in life happens for a reason.

Moreover, it can influence our memory and make us remember things we forgot. As Neil mention in is article music is used as a tool to treat patients with Alzheimer disease; it helps them to increase their state of mind, ameliorate their health and memory so they can remember things better. The Study of Petr Janata effectuated in 2009 at the University of California That concludes that certain part of the human being brain can associate memories to music and help people recalling past experiences confirm the fact Neil explained in his article. The used of music in Therapy session also impact people in a good way, as the American Music Therapy Association state it helps to exert control over stress, loss of memories and pain during therapy sessions. Some article that was published which proof the powerful influence of music in Therapeutic program include: an article published by the lancet in 2015 who was presenting a study on how music was impacting the progress of surgery on certain people, and an article published in the world journal of psychiatry presenting how music therapy made the treatment of neurological disease such as dementia, stroke, Parkinson’s disease , multiple sclerosis a success. Therefore, Music through this article is proof to be an important element for the wellbeing of our brain and a tool that can be used with success on individual with psychological issue. 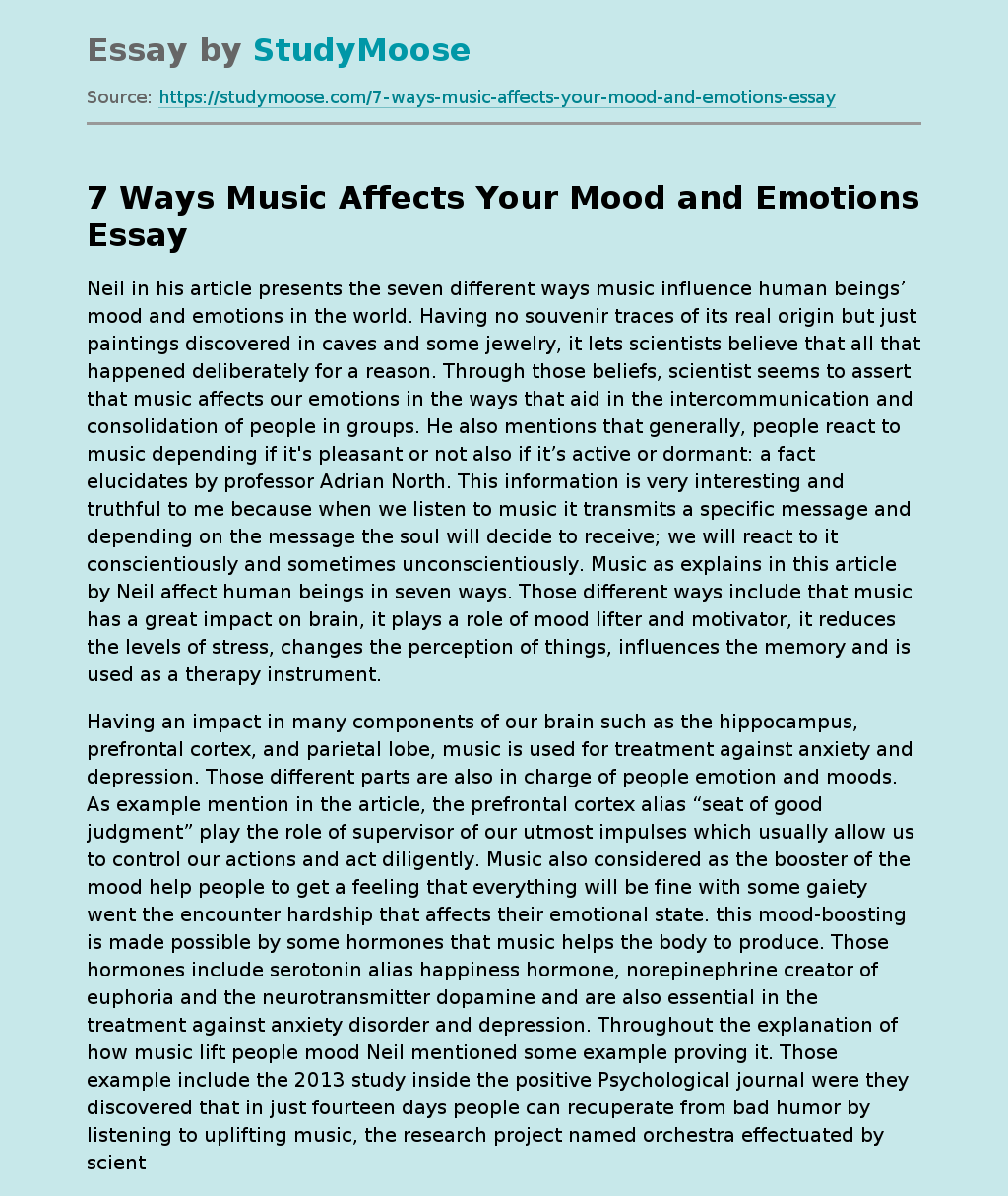