6. “It Is More Important to Discover New Ways of Thinking

Developing new ways of thinking about what we already know is very important as it helps us to develop a better understanding of that which we already know so to some extent the above statement is true. However it is as significant to discover new data or facts. In fact these two concepts go hand in hand; it is because of some discoveries that we knew when they first came to light that we have something we call existing knowledge to think about and sometimes it is through trying to develop new ways of thinking about a certain issue without a solution that we finally decide it is best to find a new explanation or concept of looking at it.

Don't use plagiarized sources. Get your custom essay on
“ 6. “It Is More Important to Discover New Ways of Thinking ”
Get custom paper
NEW! smart matching with writer

A student who goes from lower to higher school both learns new and advanced ways of thinking about the information they have gathered in previous grades as well as some new data they have never come across before which further stresses that both concepts are important.

We cannot learn everything at once nor can we know all sbout those things we know, which is why both developing what we already know and leaarning some new things are equally important.

In some cases one may find that discussing and thinking about what we already know but in a new clearer way can help us reach a conclusion whereas if we had chosen to discover new facts about it instead, our horizon of confusion would have been broadened and we find ourselves with yet another mystery to solve.

A good example of a case like this is death. Unless someone dies and comes back and tells us exactly what happens after death, no one can ever really know what happens. Any information we all have of life after death is based on assumptions that is if there is even life after death.

Discovering new facts about the so called life after death isn’t but going to cause even more confusion, so really in my view I would say it is rather best that one sticks to the knowledge and believe they have over this issue, and if anything, find new ways of thinking about instead of creating yet another confusing phenomena based on assumptions. But such fields as Science motivate constant discovery of new knowledge because this is one area of knowledge where falsification is the only method used to prove the theories because we cannot verify, in other words prove a Scientific theory to be true in any way but we can pfove it fo be wrong.

In this case it is clear then that in Science it is more important to discover new facts or data than to think about that which we already have as we need new discoveries to falsify old theories. However sometimes it may be thinking hard and deep into a scientific theory that makes one see fault in it as a result make new discoveries in which case both thinking of something in a new way and making new discoveries would have been equally important. We can for instance look into the famous example of the falsification of Newton’s theory of gravitation by Einstein’s theory of relativity.

Einstein like all other Scientists of that time saw nothing wrong with Newton’s model until a crisis came when Newton’s theory of gravity failed to account for the behavior of light. Obviously this had to be a result of scientists thinking of new ways of applying Newton’s model. No one expected the negative outcome they came out with but it was negative and the Scientists were faced with a dilemma they had to solve. That it is when Einstein invented his theory of relativity, a whole new theory, which could work even for those discoveries that Newton’s model failed to.

In any case, the point is to show that finding new ways to think of something can actually lead to the discovery of new information which in turn gives us something new to think about and in new ways if we please. Living only by developing things we already know would be depriving ourselves off so much knowledge. Had the people who lived before our generation decided they wanted to live only on what they knew, there would be so much we do not know.

Generations like that of Newton or Einstein, generations like that of Priestley or Lavoisier who made discoveries about oxygen and those of people who learned the word of God and passed it on from generation to generation till the bible was written we would not have the knowledge we have today. And the knowledge does not end there and like the paradigm shifts suggest, there will always be new information, new theories and new ways of thinking as the world revolves that will override the current theories but should we decide to live only by the data that already exists, we may find that we are making experiments with 90% errors all the time.

6. “It Is More Important to Discover New Ways of Thinking. (2018, Nov 14). Retrieved from https://studymoose.com/6-it-is-more-important-to-discover-new-ways-of-thinking-essay 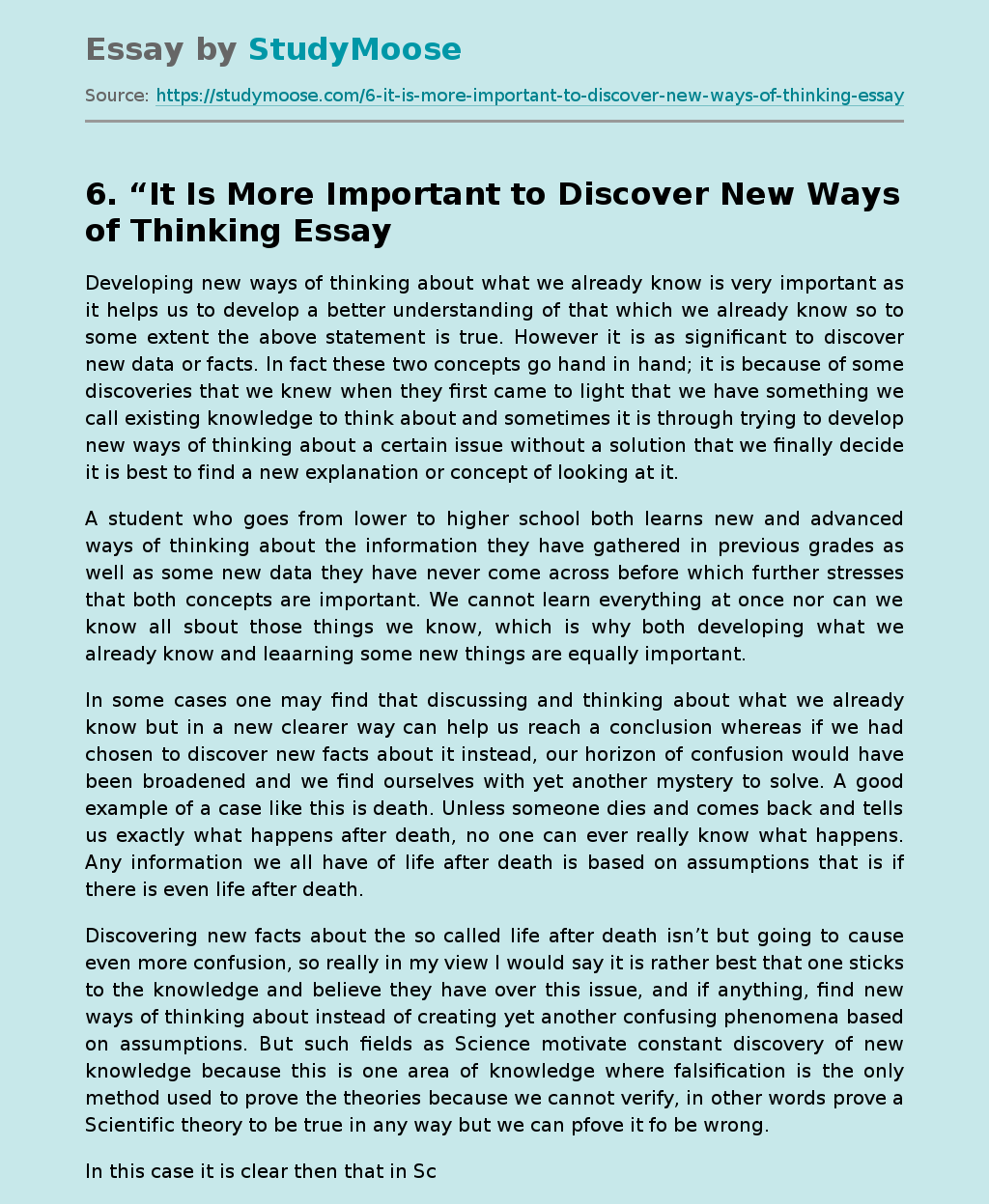