5 Qualities That Can Make Arnab Goswami A Good Entrepreneur

The editor-in-chief and president (news) of Times Now and ET Now, Arnab Goswami yesterday announced his resignation from the channel during an editorial meeting. Goswami took this step as he is planning to embark on his new journey of entrepreneurship. As per the reports, the prime time TV anchor might look to start a channel or media venture of his own.

The report further added that Tuesday’s episode of The Newshour will be Goswami’s last.

Times Now which comes under the Times Group was launched with Goswami at the helm in 2006 and quickly became one of the most highly watched English news channels on air.

Don't use plagiarized sources. Get your custom essay on
“ 5 Qualities That Can Make Arnab Goswami A Good Entrepreneur ”
Get custom paper
NEW! smart matching with writer

Beginning his career with The Telegraph and later spent several years as an award-winning news anchor at NDTV, Goswami now plans to start his second inning by turning an entrepreneur.

We have penned down some of the Goswami’s qualities which will help him to succeed in his new journey:

Goswami has an ability to connect with its viewers as he understands and measures the public opinion. Moreover, he has the courage of conviction to follow up with a news story even if it’s detrimental to his own public image or his employer’s yearly profits. This trait of him will help him to excel in the market and keep a hold on it.

2. People Love to Watch Him

There are many people who dislike him for his loud, arrogant and brash behavior on television but there are some who still love him watching.

And this was the main reason why Times Now was the most watched English news channel.

Goswami is known for its debates. He's not afraid of putting his point up in front of any political party or powerful leader. He is good in the sense that he talks straight and don't compromise on issues that have national implications.

4. Does His Homework Well:

No one can deny the fact that Goswami before debating does his homework well. He brings lot more facts in his shows than his contemporaries. His innate ability to dig facts and throw pointed questions makes him different if not good.

Though Goswami shouts, he is arrogant but still people adore and defend him on social media and that is why today he is the brand. He holds people and easily convinces them on any topic. There are people in his professional circle who would give up their right arm to replicate the way people idolize and follow him.

Goswami’s these qualities for sure will help him to succeed in his new journey. We would like to give him best wishes as he embarks on his entrepreneurial journey.

5 Qualities That Can Make Arnab Goswami A Good Entrepreneur. (2020, Jun 01). Retrieved from http://studymoose.com/5-qualities-that-can-make-arnab-goswami-a-good-entrepreneur-new-essay 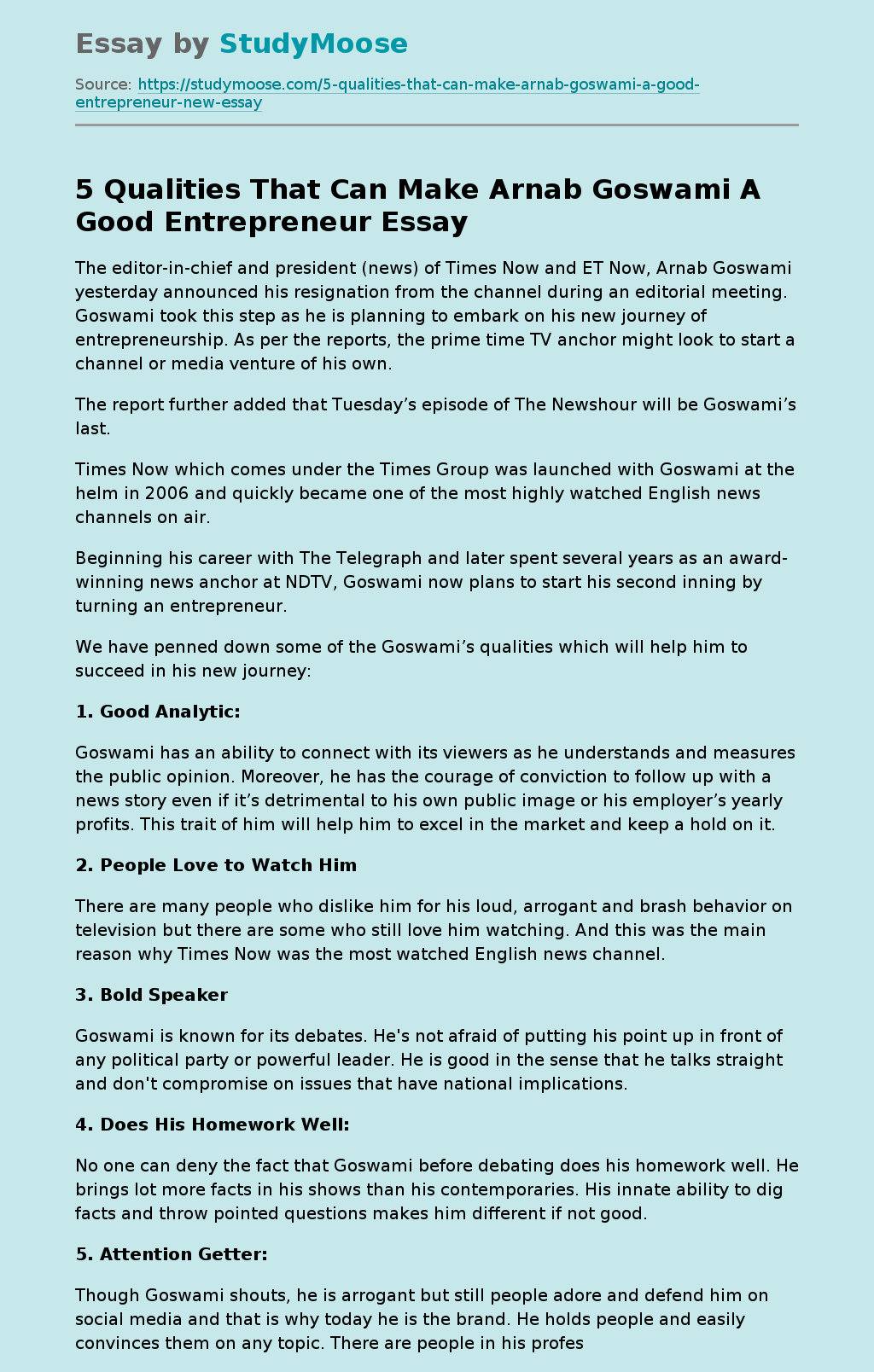