Who would like to make $250? What about $250 an hour or $250 a minute? How about $250 a second? How would you like to buy a product for $50,000 and then later sell it for millions? Do you know anyone who has done this? I do. His name is Bill Gates. Who is Bill Gates? Through his programming skills, competitive business practices, and ability to spot innovative products, Bill Gates has been the richest person in the world for the last 12 years.

Bill Gates’ success would not be possible without his programming genius.

Don't use plagiarized sources. Get your custom essay on
“ 5 minute speech on a famous person: Bill Gates ”
Get custom paper
NEW! smart matching with writer

Back when computers were a luxury, Bill Gates was already discovering the mysteries of programming on his high school’s only computer. Later, he was accepted to Harvard University in computer science, but after two years, he left to start his company Microsoft. With his knowledge of programming Bill began making a profit by selling his programs to computer manufacturing companies. He was already making enough money to expand his company to the hundreds.

But it was not Gates genius alone that made him become the richest person today.

Gates was a good business man and had the ability to spot the next upcoming products. When IBM, the computer industry leader, asked Microsoft to help develop an operating system for its computer, Bill acted quickly. He search around and was able to buy an operating system called DOS for $50,000. Gates then talked IBM into letting Microsoft retain the rights, to market MS DOS separate from IBM. Because of this, Microsoft was able to license its product to all of IBM’s competitors and it made millions.

Gates also bought Xerox’s idea of a mouse and made even more millions. But Gate’s ability to spot upcoming would be useless without his competitive business practices.

Bill Gate’s a great business man who knows how to create a PC market in his favor. With the release of DOS, it made Microsoft the standard for operation systems. Gates then released Windows, an almost identical copy of Apples graphic operation system, which helped him make his billions. Gates eliminated all other programming competition by including programs such as Microsoft word, excel, PowerPoint, publisher, and internet explorer in windows. Not only that, but he also bought hotmail and WebTV, which are not called msn hotmail and msnTV.

In conclusion, Bill Gates was not born rich. With his programming skills, competitive business practices, and ability to spot innovative products, Bill Gates has been the richest person in the world for twelve years straight. 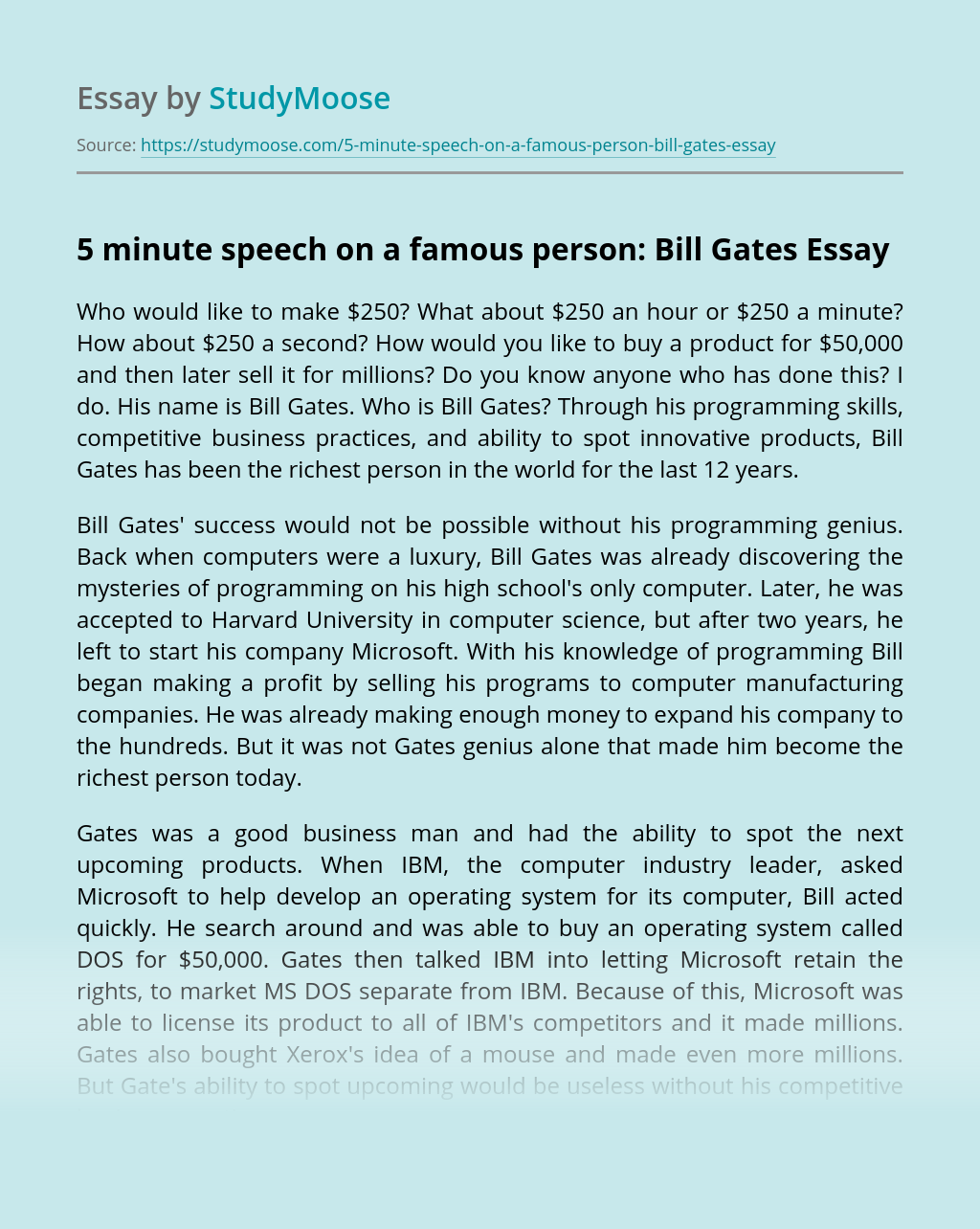