Turn in your highest-quality paper
Get a qualified writer to help you with
“ 5 forces analysis of the video game console industry ”
Get high-quality paper
NEW! AI matching with writer

The fixed cost is high. The operating cost associating with the industry is high and it will reduce the revenue of the industry. The existing cost is higher than entering, because the investment of the industry, the number of gaming companies, the high requirement of update technology and the changing of customers’ demand. According to that the rivalry among competing sellers is high. b. Threat of new entry The cost of entering this industry is high, especially the investment and R&D expanse.

The Mobile and personal computer will be considered as a high threat of the industry because of the attractive price, performance, and they can involve more functions more than entertainment.

Customers will switch if there is a new development of performance or the technology. The switch cost is low as we mentioned before. So, the threat of substitutes is high. d. Bargaining power of suppliers There are few hardware manufacturers but they can meet the demand of the industry successfully like IBM, NVIDIA, and ATI.

The switching cost of changing suppliers is high because of the complicated technology involved. The cost of industry members to integrate backward is high. The console industry is an important customer of the supplier, but in the main competitors, they have controlled the core technology themselves. It can reduce the power of suppliers. So the bargaining power of suppliers is moderate to high. e. Bargaining power of buyers The buyers are in all ages and in all jobs. But in the console industry, there are 3 main competitors that dominated it, it almost an oligopoly, so the power of buyers is low.

The switch cost is not very high but because the limit choice of company, it’s difficult to switch in the whole industry. The cost of integrating backward is high. Usually the companies will be highly protective and secretive of the information of their own products, the buyers can’t access to the information about sellers and their products, price and costs easily. So the bargaining power of buyers is low. According to the analysis, the competition in the video game console industry is moderate to high.

5 forces analysis of the video game console industry. (2017, May 10). Retrieved from https://studymoose.com/5-forces-analysis-of-the-video-game-console-industry-essay 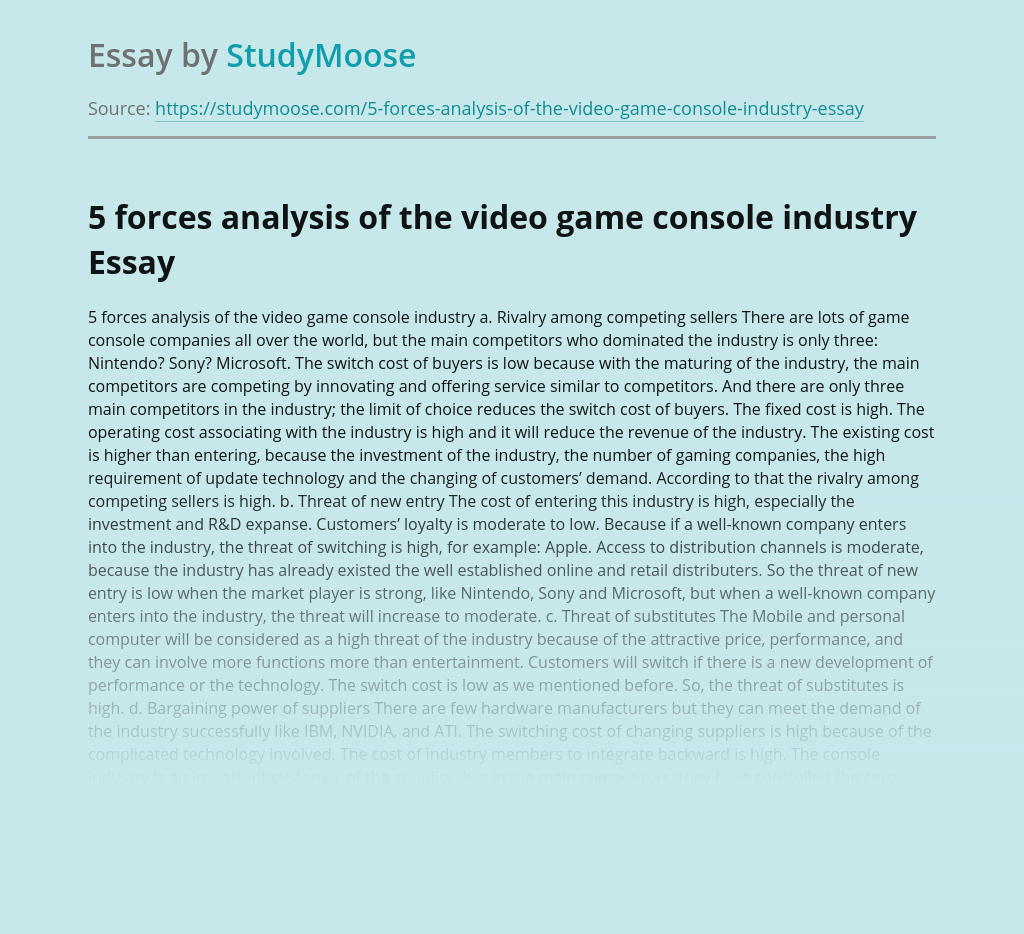 Turn in your highest-quality paper
Get a qualified writer to help you with
“ 5 forces analysis of the video game console industry ”
Get high-quality paper
Helping students since 2015
Stay Safe, Stay Original