Jackie Robinson, 42, first black man to play on a team of all whites and make it to the world championship. He rocks. His number is retired and people wear the number 42 on their jersey every year for one day because of him. All of this information I got from the movie 42. The movie was amazing and very good! In the beginning when it showed how he became selected was different than what I imagined it would’ve been done. During the movie there were threats from white people saying they’d come where Robinson lived and hurt him or something, so he left with the black reporter guy who later became a part of the American Baseball Press or whatever it was called.

Don't use plagiarized sources.
Get Your Custom Essay on 42 Movie Summary Just from $13,9/Page

However, Robinson thought that he was leaving cause he got drafted from the team. :P Later on in the movie, because Robinson got accepted to play on a Major League Baseball Team, the Brooklyn Dodgers. However, most members on the team wrote a petition saying that they wouldn’t want to play baseball if Robinson joined the team because he was black.

Jackie Robinson was not only bullied by the audience, but also by other players of different teams.

One of those people were Ben Chapman; he bullied Robinson until he almost lost it, but had a teammate stand up for him, and Chapman ended up having to take a picture with Robinson to show the world he changed whether he did or not. Another person who technically bullied Robinson was the guy who threw the pitch at Robinson’s head. His name I forgot but I remember because of that pitch to the head, both teams broke out in a fight and Robinson was confused on what was going on or so it looked like. Of course though, Robinson got the Dodgers to make it all the way to Championship or World Series, I forget which one it was. I can sort of tell that throughout the movie, there was a lot of things that they most likely left out like how much and/or bad he was threatened and what he went through being the only black man on a white team, etc. so it was more of a happy times movie with a little conflict it seemed. Honestly it’d be kind of nice to know what other sorts of things he went through even in you can only imagine it, still. At the very end of the movie it showed what the ‘main’ people did after the movie stopped. One thing that I will say that bugged me and made me sad and disappointed was the part when the dad and boy are in the stands and are excited fro Pee Wee to come out and then Robinson comes out and the dad starts to yell “get out of here nigger! You don’t belong here!” and the rest of the crowd does the same and the kid looks confused and then joins in screaming the same things, but then Pee Wee puts his arm around Robinson and the look on the boys face looked sad and disappointed in himself or so. That scene made me sad and disappointed in the father for setting such an example for his son and making him say something he was unsure of or however he felt about it. The look on the boys face when Robinson came out and everyone including his dad started yelling at him and saying those things, the boy looked a little scared or unsure and concerned about what to do and such. Broke my heart a little, but it was what it was. Overall, amazing movie!! For sure a favorite! 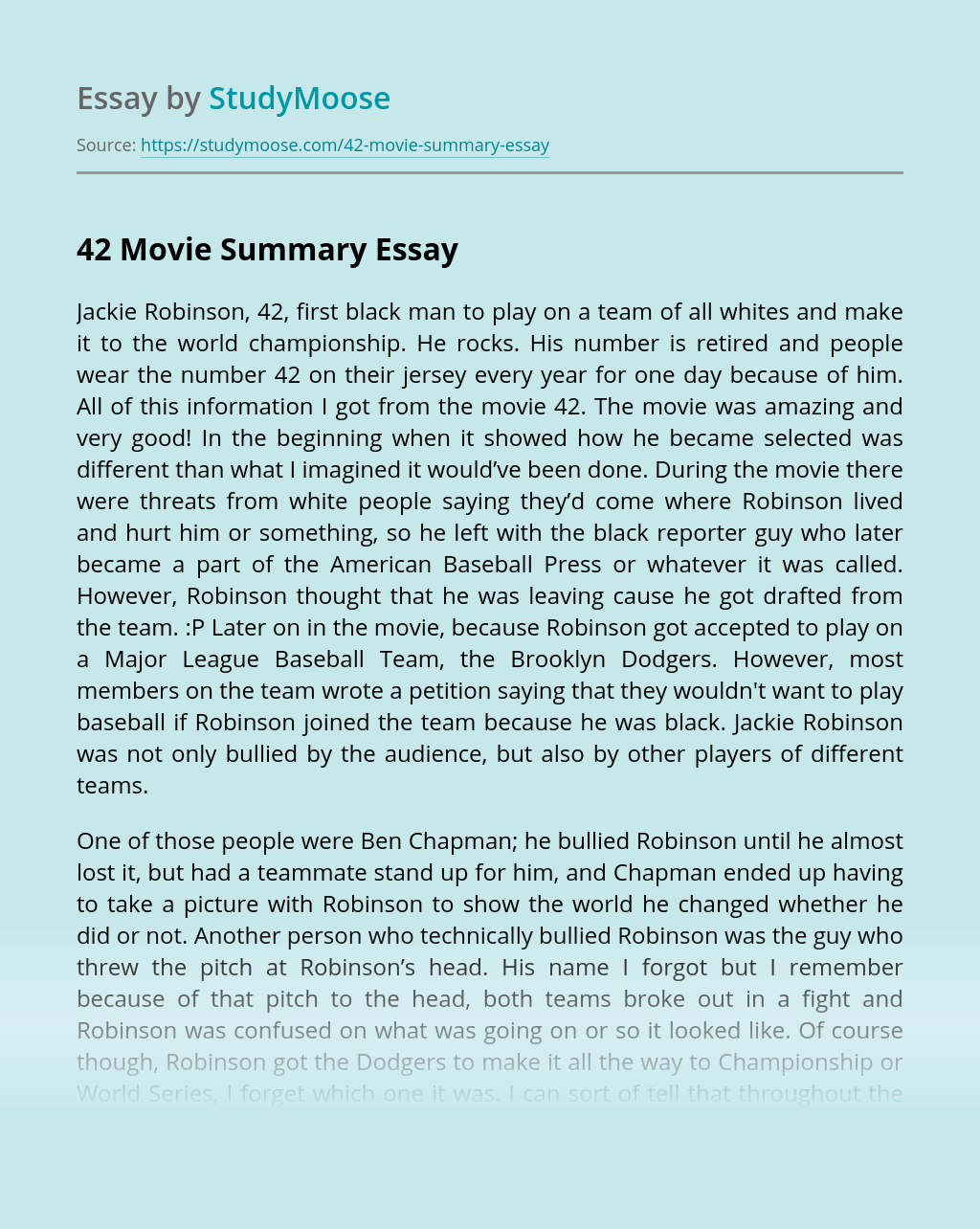 The Creation of a Modern Education System for Ireland

INCIDENT RESPONSE TEAM POLICIESWhen it comes to data, there will eventually be a breach of security or possibly a natural disaster. How the incident is responded to is extremely important. The speed and effectiveness of the response will potentially limit the possible damage and reduce any loss. A well put together incident response team (IRT)...

Imperialism Defined Michael Parenti, a political scientist from Yale University, defines imperialism as “the process whereby the dominant politico-economic interests of one nation expropriate for their own enrichment the land, labor, raw materials, and markets of another people”(http://www.michaelparenti.org/Imperialism101.html). On the other hand, for Vladimir Illich Lenin, author of the influential pamphlet Imperialism, the Highest Stage...

It has been given my attention recently that the Roanoke branch office has just recently experiencing lots of troubles. The issue began after two of the leading management individuals left the agency-an art director and an account executive. In addition, three of the graphic designers and four of the copywriters are threatening to quit due...