Reasons Chinese Companies IPO in America Why do so many good Chinese companies go public in foreign markets rather than let domestic investors share in the profits of growth? Chinese investors often complain about why would “good companies”, like Tencent (0700. HK), Baidu (NASDAQ: BIDU) and Sina (NASDAQ: SINA), choose to list in the US and Hong Kong instead of on the Chinese A-shares market. There are four main reasons: 1. If a ‘Chinese’ company takes foreign investment using a VIE structure, it can only list abroad 2.

Don't use plagiarized sources. Get your custom essay on
“ 4 Reasons Chinese Companies Ipo in America ”
Get custom paper
NEW! smart matching with writer

Many companies don’t meet the strict financial standards for a Chinese listing 3. China’s listing process takes a long period of time and not very transparent, a torturous examination compared with America’s speedy registration 4. China’s regulatory agencies perpetually overregulate, rather than letting the market decide 1) If a ‘Chinese’ company takes foreign investment using a VIE structure, it can only list abroad The core reason is simple. These companies aren’t at all eligible to listed on the Chinese A-Shares Market, which restrict the overseas-funded enterprises severely.

To receive foreign investment, a great number of Chinese companies set up a corporate structure called the VIE or Sina structure, because some industries such as internet info &amp; services and financial services are restricted or even prohibited in foreign-funded investment. This structure is especially common for technology companies that raise financing early and often, frequently from foreign investors. State-owned enterprises aside, most ‘Chinese’ companies in the US are not legally Chinese at all. They’re Cayman Islands, British Virgin Islands, etc.

ompanies that control Chinese entities. Chinese regulators have raised the idea of allowing foreign companies to list on the A-Shares Market, but at present that’s still speculative. A worry for foreign investors is that the entire VIE structure, which largely serves to circumvent Chinese laws barring foreign ownership, has been called into question by Chinese regulators in recent months. 2) Many companies don’t meet the strict financial standards for a Chinese listing In August 2005, when Baidu (NASDAQ: BIDU) listed in US, Chinese asked this very question. Let us review.

Baidu didn’t reach profitability until 2003. When it went public, it had been profitable for just 2 years. The company’s profit was only $300,000 (2. 4 million RMB) in the quarter prior to its IPO. This is far from the minimum IPO criteria for the Chinese Small and Medium Cap A-Shares Market, where “net profit in the recent 3 fiscal years must be positive and the sum exceeds 30 million RMB; aggregate cash flow from operational activities in the recent 3 fiscal years exceeds 50 million RMB, or aggregate operating revenue in the recent 3 fiscal years exceeds 300 million RMB. Baidu didn’t even live up to the standards for listing on the Chinese Growth Enterprise Market: “Profitable for the previous 2 years, with aggregate net profits of not less than 10 million RMB and consistent growth” or “profitable in the previous year, with net profits of no less than 5 million RMB, revenues of no less than 50 million RMB, and a growth rate of revenues no less than 30% over the last two years. ” Nor may capital be less than 20 million in the year prior to the IPO. ) China’s listing process takes a long period of time and not very transparent, a torturous examination compared with America’s speedy registration Going public is like going through a round of torture. In the prolonged process of waiting for review, they have not only to be upset by countless uncertainties, but also incur high costs off the balance sheet. 4) China’s regulatory agencies perpetually overregulate, rather than letting the market decide Chinese regulatory agencies are actually most concerned about investors.

They fear that investors will buy low-quality stocks and they therefore spare no efforts to set up strict review processes for IPOs. They are also concerned about investors losing money in the secondary market and therefore set up “protection measures” like downward limits and upward limits and make adjustments to the “IPO rhythm” to stabilize the secondary market. But these ‘good intentions’ only end up leading everybody astray from the original market intention.

The quality of companies listed on the A-Shares Market is far from satisfactory, while most of the companies with the best growth potential and highest returns to investors list abroad. Moreover, the A-Shares Market remains one of the capital markets with the largest fluctuations in the world! The conclusion should be fairly simple: regulatory agencies should not and cannot be held responsible for a company’s quality through an IPO review. The operational risk of a company does not move in lock step with static indicators like financial data. Regulatory agencies should not and cannot be responsible for the luctuations in the secondary market. Fluctuations of the market can never be contained by up or downward limits, nor can the regulator effectively set the “IPO rhythm. ” Chinese companies will continue to list abroad, despite sky-high A-Share Market valuations To be fair, under the elaborate care of regulatory agencies, A-Shares do have their own magic, that is, a super financing power. Especially in the fiery Growth Enterprise Market over the last year, PE ratios frequently shoot up to 100x. Every single listed company has been overjoyed to get more funds than planned.

With such “stupid wealthy people” circumstances, will companies still want to list in foreign markets? I believe so. Again, there are many companies that will never meet the standards of the A-Shares Market. For growth companies that really desperately need funds, even the listing threshold of the Growth Companies that list abroad don’t have to worry that investors will criticize them for a broad definition of “misappropriation. ” For them, going public is not just a one-time IPO sale, but also a sustainable financing platform. In Conclusion

To sum up, the pre-IPO review and post-IPO trading have made A-Shares Market a different ecosystem from foreign markets. It is hard to say which is better. But companies themselves have preferences. Therefore, I don’t think fewer companies will list in foreign markets despite the high valuations of A-Shares. It’s hard to tell if “quality Chinese companies” will give A-Share investors a chance to invest. Article by Simon Fong (??? ), Founder &amp; President of Snowball Finance, iChinaStock’s parent company. The original Chinese article was published in the October edition of The Founder. 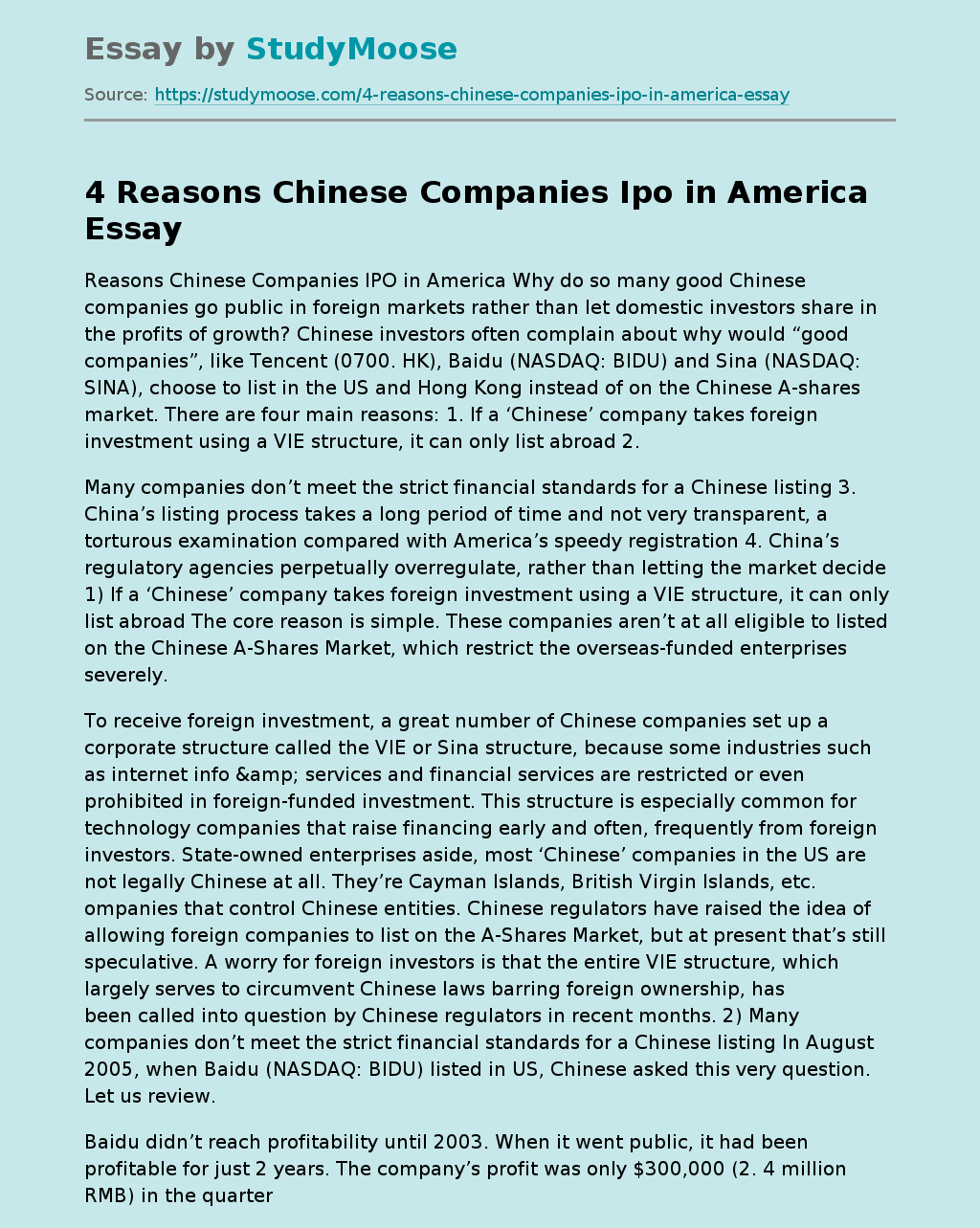