Wheelan (2013) identifies the four stages of team development and provides detailed explanation of how a group transforms itself from a stage one group of uncertainty into a successful, highly productive stage four team. This requires work and a thorough understanding of the many internal/external influences that can occur during each stage. A team member or leader who is well versed in these stages and who can evolve with each stage will be better equipped to deal with possible obstacles that can hinder group progress and implement practices to help the group successfully work through a particular stage.

Don't use plagiarized sources.
Get Your Custom Essay on 4-MAT Book Review Just from $13,9/Page

The goal is for the group to become a team that will value the importance of everyone’s contribution within the group and how it relates to the overall ability of the group to successfully accomplish the mission. As this is achieved, the work will no longer feel like a chore as team members encourage, inspire, and have fun completing tasks and achieving the desired outcome (Wheelan, 2013).

In the first stage of group development, termed dependency and inclusion, team members are dependent upon the designated leader to provide a sense of belonging and to create an environment where members feel safe enough to suggest new ideas (Wheelan, 2013). The overall goal of stage one group development is the ability to create a safe and inclusive environment for all members as some may experience certain behavioral characteristics associated with feelings of insecurity and a need to feel included in the group. Stage one members may feel apprehensive about sharing their ideas until they feel that the environment is safe to share and that their input is valued (Wheelan, 2013). As members work through the group one stage, they will become more confident in their role and begin to rely less on the team leader for input.

In addition, group members will begin to openly share their ideas, which in turn may create conflict within the group as different views and values will begin to be challenged among group members. Although uncomfortable, this potentially volatile but necessary part of stage two group development will lead to an increased trust among group members. Wheelan (2013) explains, “Only through conflict resolution and the development of a unified view of the group’s purpose and processes can true collaboration be achieved” (p. 28). During stage two group development, the team leader and team members’ ability to manage conflict resolution will determine whether the group succeeds or fails.

During stage three, members of the group roll up their sleeves and begin to focus on the task at hand. Egos are checked at the door as team members begin to sense a clearer picture of individual and team goals and communication becomes more task-oriented (Wheelan, 2013). As stage three groups develop, productivity is increased and relationships are strengthened as the group can now move to stage four successfully if they continue to manage and adjust team roles and responsibilities, resolve conflict, and receive constructive criticism with an open mind.

As a youth leader, I was tasked with forming a ministry team to work with school-aged children ranging in ages from 8 to 19 years of age. As a District Fire Chief for a large fire department, I assumed that this task would be similar to forming a team that responds to emergency calls; however, there were several items that I would overlook initially that would prove to be painful learning opportunities as I progressed through my ministry team building experience. First, and probably most important, was the fact that I assumed that everyone serving with me had a clear picture of what our goal was as youth leaders; to share the gospel of Christ through grace-filled passion demonstrated by love, compassion, understanding and encouragement. I still remember our first meeting as I handed out information regarding the bible study material we would be using.

As I explained the syllabus and the details of the study itself, Joey, one of the volunteers, asked, “What is it that we are trying to accomplish through this study?” I explained that the objectives were listed in the packet and that everyone should familiarize themselves thoroughly with the material provided. As Wheelan (2013) explains, it is the team leader’s responsibility during stage one to establish defined goals and to identify specific team member roles and how they will contribute to the overall plan. This error on my part led to confusion, frustration, and unfortunately the departure of some of the youth volunteers, as they did not feel that the value of their input was considered nor was a clear picture of what our purpose was explained.

Wheelan (2013) provides many good examples of what to do in certain circumstances that deal with safety and inclusion, conflict resolution, identifying roles and responsibilities, and fostering esprit de corps during group development. In addition, she identifies the positive traits that should be displayed by both team members and team leaders alike such as involving other members in the leadership of the group and actively participating in achieving objectives. While the strength of this book is displayed in the many examples provided by the author of what to do if a certain situation arises, this author was curious as to what a team leader or member would do if a team member must be dismissed for poor performance? While this is something that this author would not want to ever experience, I am curious as to whether or not Wheelan has ever experienced this in her studies and how might a leader or team member deal with this issue? Another consideration that this author believes influences group dynamics is socioeconomic and cultural diversity.

While the above-mentioned positive character traits for leaders and team members are just a few of the many provided in this text, Creating Effective Teams does not address the internal and external influences that are ever-present in groups through socioeconomic and cultural diversity. This author believes that these two influences alone should be strongly considered, as group cohesiveness will depend largely upon a thorough understanding of how an individual’s worldview influences his or her perception of other group members and their individual role within the group.

Clear concise communicated goals that explain the purpose, the mission, and how each member will contribute to the overall plan is the first action that this author wishes to accomplish. Establishing a safe inclusive environment at the outset of group development is vital to member participation as this author plans to meet with both the youth ministry and worship ministry team in the upcoming week to encourage team member input and to identify roles, responsibilities, and a unified mission statement. Training team members in both my ministry and the fire department I work for in how to effectively manage group conflict is an additional action plan that this author hopes to achieve. Understanding that conflict is not necessarily a bad thing and that good can come from disagreements is important for everyone to consider when building our team.

This author feels that this action will open up a new line of communication for individuals within my team to voice their concerns and contribute successfully to the group with sincere honesty. The third action that this author would like to achieve is to become a leader who evolves with the group as it develops through each stage. The beginning stages of the group’s development will require me to be more assertive; however, the ability to evolve as a leader to a more consultant role is where this author plans to take action. According to Wheelan (2013) as I allow members to share in the leadership function of the group, the likelihood that the group will succeed is increased. 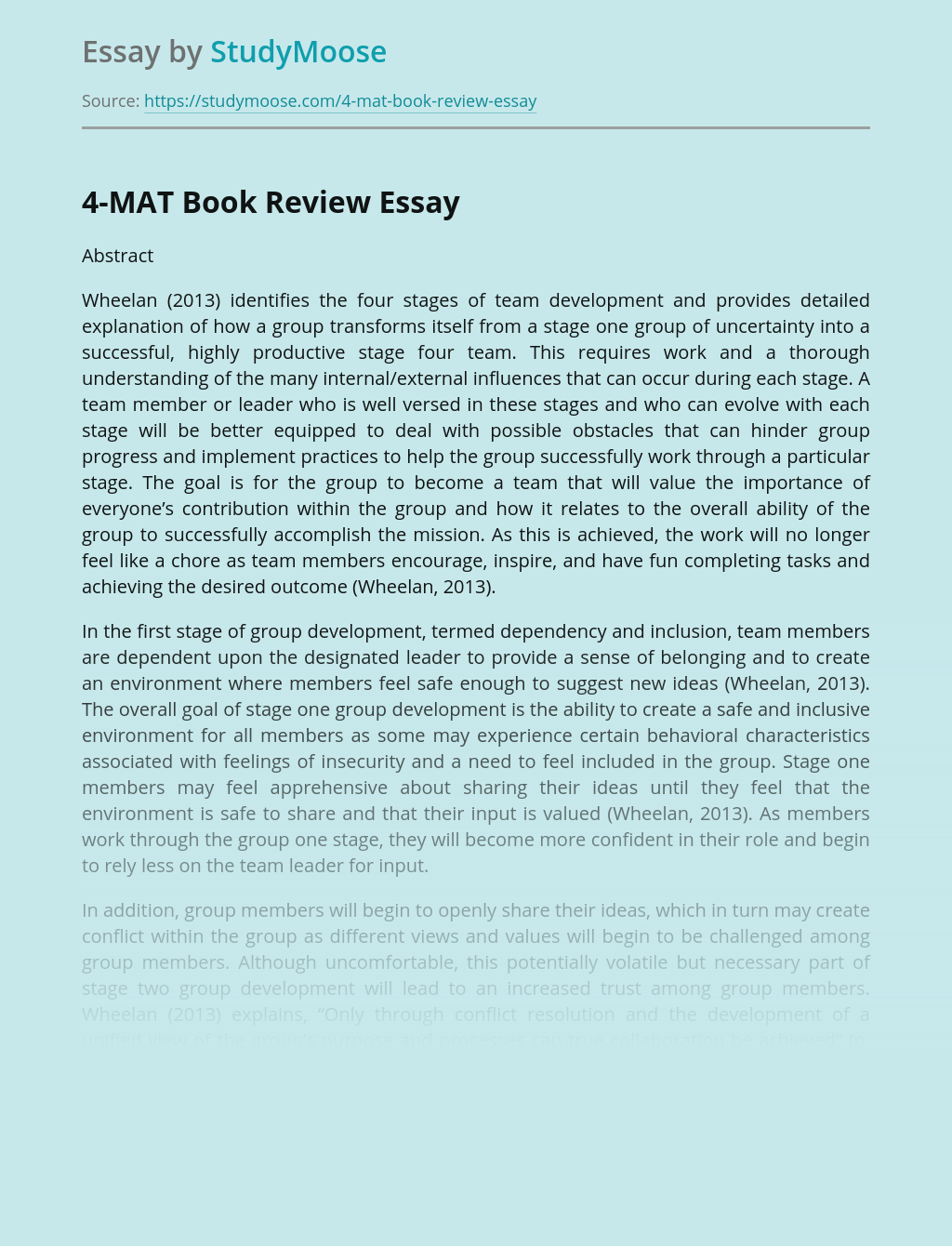 System development is a procedure in which programmers with organization contribution compose codes to fix an issue that deal with the organization system or automate a procedure. There are 3 significant systems development techniques that been used to solve systems’ problems. The system advancement strategies are SDLC (Systems Development Life Process), JAD (Joint Application Development),... VIEW ESSAY

9. How will entry into a developed foreign market differ from entry into a relatively untapped market? Marketers face many issues in the decision making process in order pursue the many different possibilities concerning foreign and domestic markets in terms of expansion and structural change. These companies seek ways to improve capital by expanding into... VIEW ESSAY

The learning of new information and the mental ability for an individual to apply reasoning or calculation and perception of relationships defines one’s intelligence. Retrieving and storing information in the general mental capacity, as well as adjusting to language fluency is also perceived as intelligence. So, intelligence is not only the learning and understanding of... VIEW ESSAY

The Banking Sector has for centuries now formed one of the pillars of economic prosperity. Indeed history provides us with some starting information regarding how banks provided finance for imperialist ventures in newly acquired colonies. Over time banks have formed an important part in providing an avenue for both savings and investments. Land, Labor, capital... VIEW ESSAY