Come to think of writing a report on three countries, I haven’t traveled all that much…

When I started working on this topic in the beginning I found it uninteresting, but when I started doing an extensive research, I found this topic more and more inviting. Doing a research on countries was fun and a worthy experience. Every country has its own enriching and unique experiences with diverse cultures and backgrounds. The countries that I found most interesting to me are Armenia, Iceland, and Latin America.

Don't use plagiarized sources. Get your custom essay on
“ 3 Places That I Would Like To Visit ”
Get custom paper
NEW! smart matching with writer

The following paragraphs talks about the reasons why I found these countries fascinating.

A wide range of climatic zones have been recorded within Armenia. Armenia is located in the southern Caucasus and is the smallest of the former Soviet republics. It’s a land of rugged mountains and extinct volcanoes; its highest peak is Mount Aragats, which is 13,453 ft. (4,095 m). Armenia is acknowledged as one of the cradles of civilization. Numerous monuments and masterpieces of the Ancient era and Middle Ages can be found throughout the country.

Due to harsh and cold weather conditions, I was amazed to read how they do farming. The Armenian winters are so cold that farmers would dig up the grape vines and foods to prevent their freezing in order to be replanted in the spring.

The summers are long and warm and thus the harvests are plentiful. Vegetables such as squash, onions, tomatoes, garlic, cabbage, okra, green beans, peppers, cucumbers and eggplant are used quite broadly during the summer growing season.

Armenians love vegetables and are very skilled at roasting them. The Armenians were the first Christians on earth and that had an impact on their diet because of their religious belief and their farming methods! The meat staple of the country is lamb and to a lesser amount, chicken and beef. No pork is used in the Armenian diet due to biblical belief that only animals that chewed their cud were to be eaten. It would be a very rare opportunity to go to a place like Armenia.

There are many fascinating places to explore in Iceland. Iceland is an island of almost 40,000 square miles and lies midway between North America and continental Europe. It borders the Arctic Circle in the North and has a total land mass of 103,000 square kilometers. The average height is 500m above the sea level. The country does not get that cold. Of course there is ice in Iceland but the only ice you will find (except in the wintertime) is on the glaciers and ice-caps which cover only about 120f the total land mass and the air is as clean and fresh as can be.

The weather in Iceland is however very unpredictable, it is common to have sunshine, rain and wind all on the same day. Ever since the last ice age, the largest lava flow that has occurred in Earth is at the end point of Þjórsárhraun lava, located at Árborg in Iceland! The Drepstokkur hill, which is the birth-place of Bjarni Herjólfsson, who discovered America in 985 AD, is also situated in Arborg. It is believed that ghosts with the blue scarf are the only inhabitants in the Einholtshellir cave in Hellisland. Personally, I think it would be an unique experience to travel around Iceland.

3 Places That I Would Like To Visit. (2016, Jul 17). Retrieved from https://studymoose.com/3-places-that-i-would-like-to-visit-essay 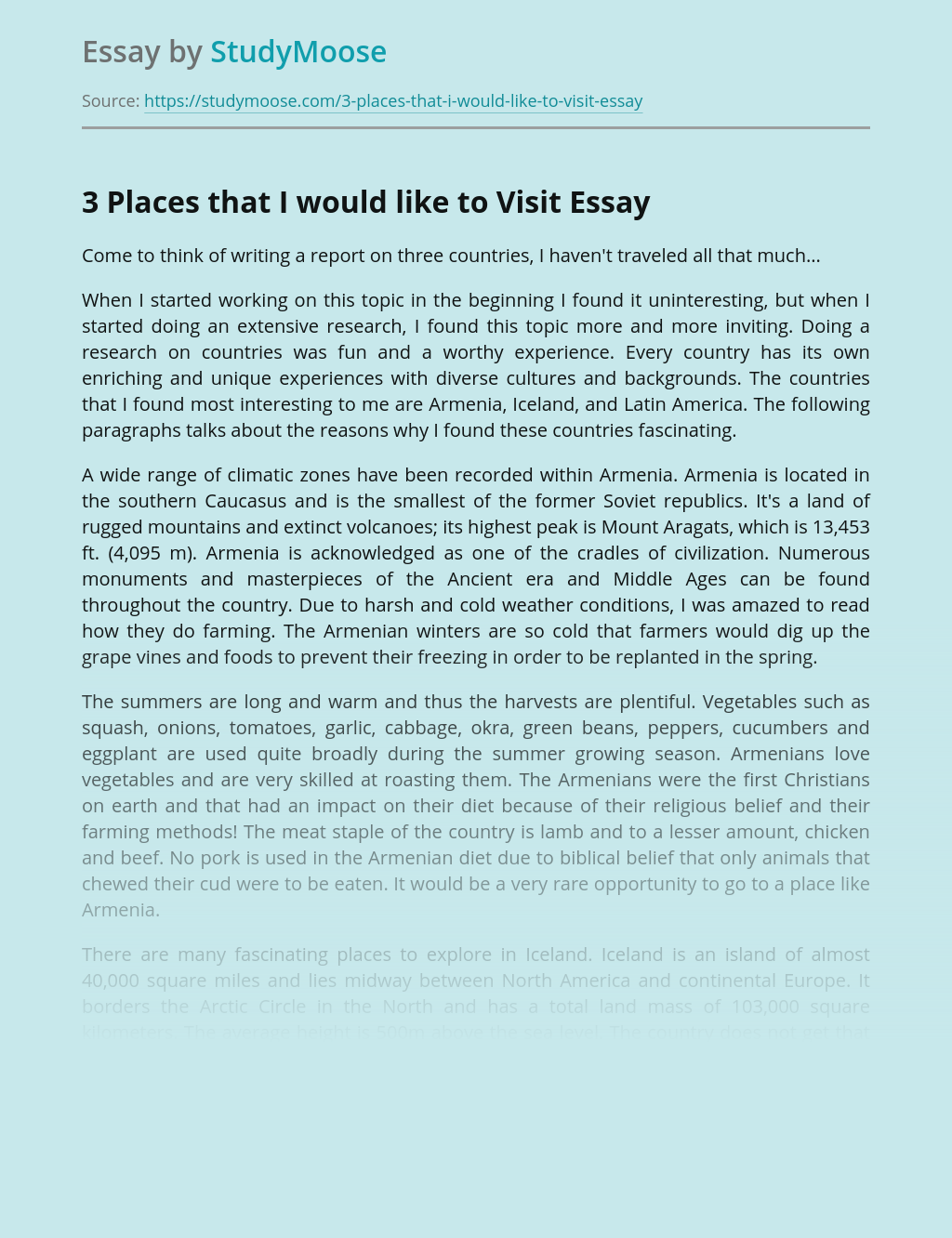