The plot of the story is about a boy named Emery listing throughout the story, 25 reasons why he hates his brother Todd. The story is told from first person by Emery. Emery is not an average 15 year old, he dresses like a forty year old and he is much more mature than his age and stands out from all the others.

When the girl Emery likes, Jodi, gets partnered up with him she isn’t very happy about it till they go to Emery’s house and she sees Todd.

Turn in your highest-quality paper
Get a qualified writer to help you with
“ 25 Good Reasons for Hating My Brother Todd ”
Get high-quality paper
NEW! AI matching with writer

Jodi immediately falls in love with him and Todd likes her too. Todd asked Emery if it was okay for him to ask out Jodi, and Emery says he doesn’t like her anyways. Then Emery gets mad and puts his head down on his desk and Todd makes sure if he’s okay. Emery’s older brother Todd does things to annoy Emery unintentionally but Emery thinks he’s doing it all intentionally.

The things Todd does is what an average older sibling does, but Emery thinks its just Todd acting big. From Emery’s point of view, Todd is an annoying older brother who acts big about the things he can do. From the point of view the story is told, you can tell Todd isn’t the way Emery thinks he is, he makes sure it is okay for him to ask out the girl Emery likes. When Emery disliked that idea, he puts his head down, and Todd tries to comfort him.

Emery makes the list not because he hates his brother Todd for the things he lists, but to make him feel better about Todd asking out the girl Emery “loves”. Emery is jealous of his brother Todd because he is so much better than everything than him and he is more popular. It’s a common rivalry between older and younger brothers. Todd actually cares about Emery but he always takes everything Todd does in a negative way. The moral of this story is that you can’t stay mad at your family members forever, family always sticks together. 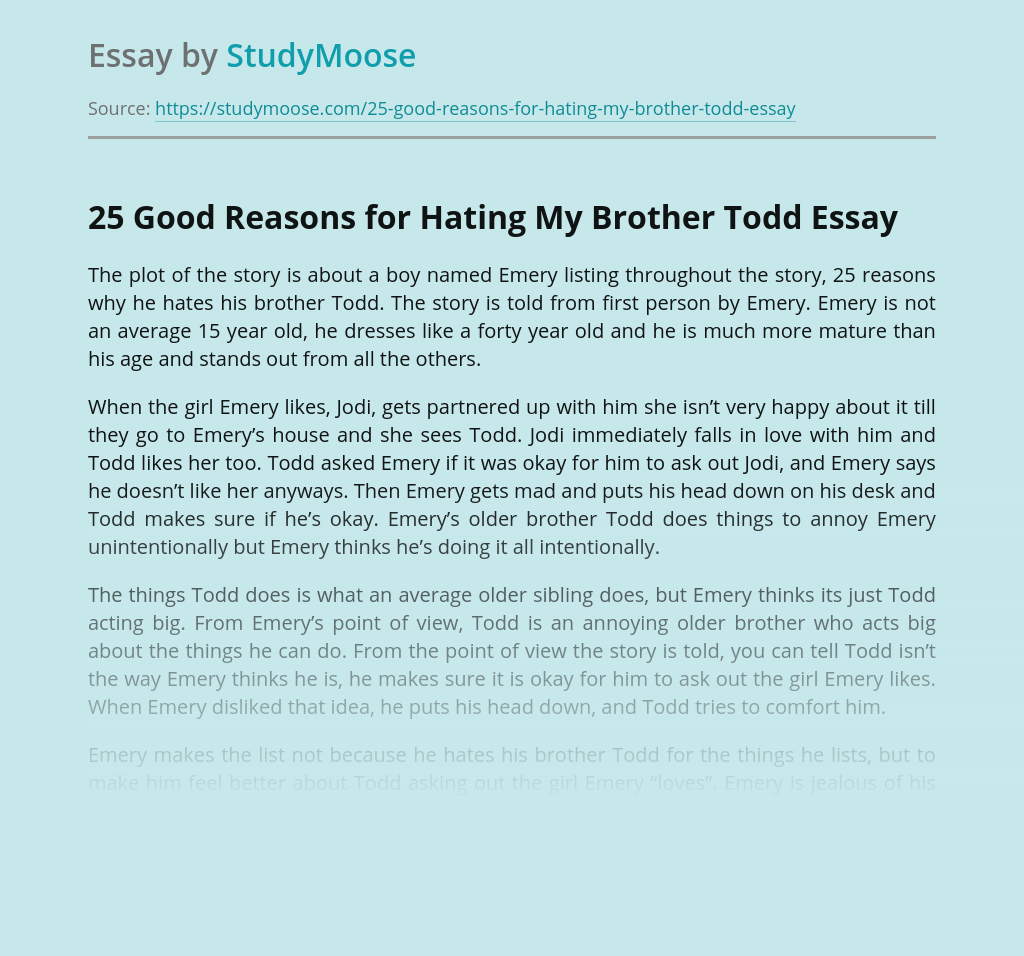 Turn in your highest-quality paper
Get a qualified writer to help you with
“ 25 Good Reasons for Hating My Brother Todd ”
Get high-quality paper
Helping students since 2015
Stay Safe, Stay Original