In this paper we will research the Chinese Revolution of 1911. Talk about how is Lu Xun’s A Madman’s Diary a reflection of China’s revolutionary history, explain how In Diary, who the madman was and what he represented. Also we will look at and explain what cannibalism represented. And then we will discuss how this can be applied to our lives.

The Revolution of 1911 was a period of time during Chinese history which overthrew China’s last imperial dynasty, and established the Republic of China.

It was made up of many fights and uprisings. What changed it all was the Wuchang Uprising on October 10, 1911, which was the result of the Railway Protection Movement. This ended with the resignation of the “Last Emperor” on February 12, 1912, which marked the end of the Imperial rule and set up the China’s Republican era. A Madman’s Diary promoted China’s education and progress similar to the style of Western civilization thorough first-person fiction that is obscenitively satirical.

At the end of the piece, the madman says,” Perhaps there are still children and future generations who have not yet fully adopted Confucian values are the likely candidates for social change. The have not yet read the history books pounding in the ideas of age-old morality and piety and social cannibalism. Their parents have not yet corrupted their belief system. Save the children, and save China. The exact words from the book says that the madman: was one of two brothers: Two brothers, whose names I need not mention here, were both good friends of mine in high school; but after a separation of many years we gradually lost touch.

Some time ago I happened to hear that one of them was seriously ill. pg. 131 The Longman Anthology World Literature 2nd Ed The brother that was seriously ill was considered the madman and the only illness he was suffering from was a persecution complexity issue within himself. The madman’s ideas represents the changes sought by the Revolution of 1911 which were a spirit of progress and reform at both social and personal levels; the rejection of an tyrannical traditionalism, conformity and ignorance.

The madman respects writing as the source of apparent truth but is trying to gain true wisdom through the making of this novel literary. As cannibalism is metaphor for the unfeeling nature of Chinese feudalism, the madman is Lu Xun’s ideal persona. Furthermore, Lu Xun personifies his own ideals through his career choice to pursue writing in an effort to bring about the spiritual awakening that he believes the Chinese are in need of. In the end, Lu Xun effectively places himself as the “madman” and revolutionary of modern Chinese literature.

This story has taught me a lot and I am glad that it was a piece of literature that we had to read. It taught me that no matter how crazy we think we are sometimes we are really the smartest ones in the bunch and it generally is just a persecution complex issue that we have with ourselves which we need to find a way to overcome. 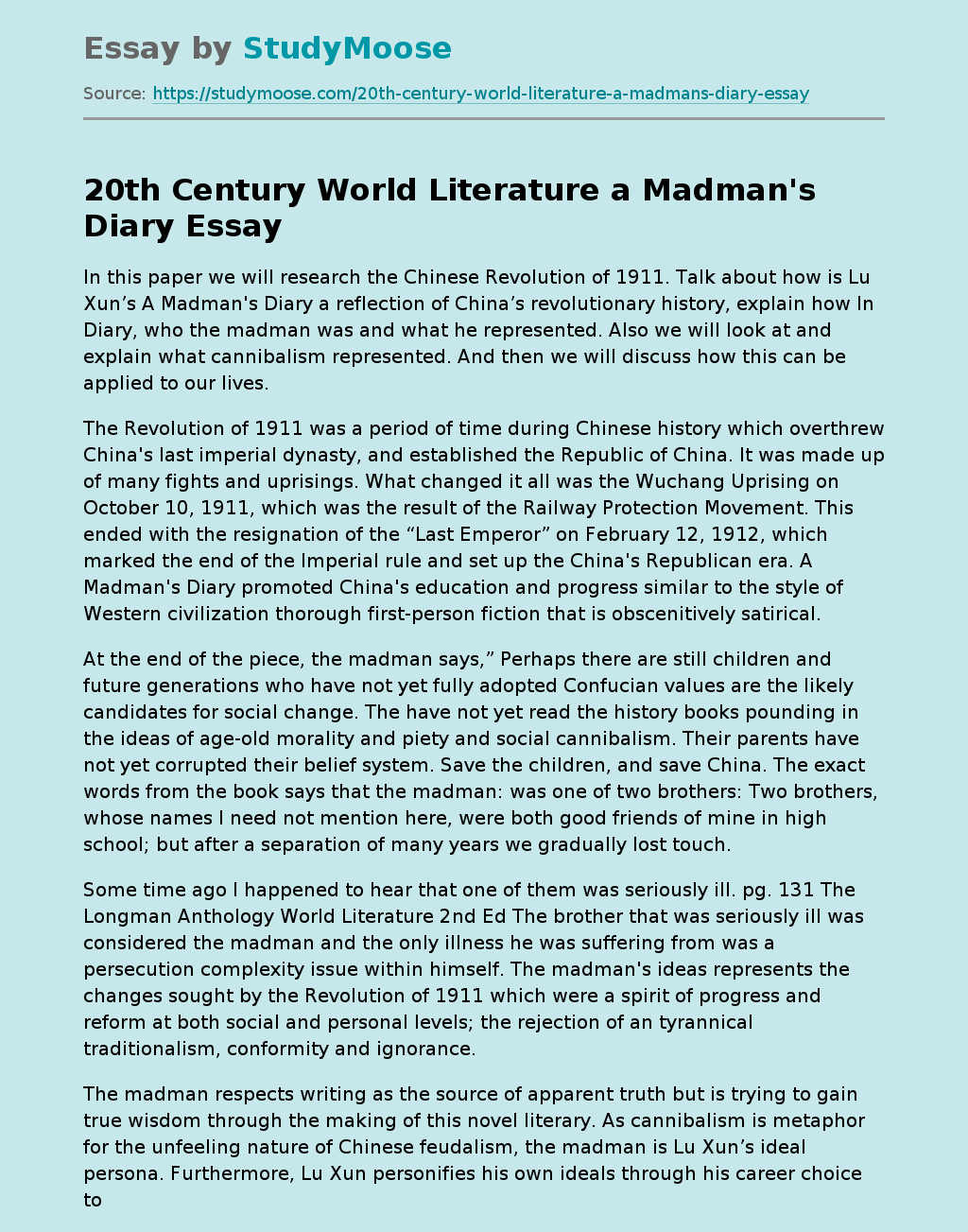