1984 and V for Vendetta Comparing and Contrasting

Turn in your highest-quality paper
Get a qualified writer to help you with
“ 1984 and V for Vendetta Comparing and Contrasting ”
Get high-quality paper
NEW! AI matching with writer

It is the government that controls the lives of the people and how the society should be run. In 1984, ‘Big Brother’ aka the Inner party, is the figure that keeps an eye on the people and uses telescreens to watch their movement while in V for Vendetta; ‘Leader’ aka Adam Susan, is in charge of England, its people and the Norsefire party. Another thing is that both factions have secret police. The jobs of the secret police in 1984 and V for Vendetta are basically the same as they spy for the government and try to capture people who are against the government.

The people are being controlled by the leaders of their country to make sure they behave themselves and not try to rebel. The contrast between 1984 and V for Vendetta for the totalitarian rule are a bit different. In 1984, the government, more specifically the inner party, watches every move of the people and check carefully what they do while in V for Vendetta the government, more specifically the Norsefire Party, is a bit more lenient as they don’t set up cameras on the houses of every people but still set up cameras on public properties.

In our society today, we have all these rights, but imagine if we id not. 1984, written by George Orwell, and V for Vendetta, directed by James McTeigue, both paint accurately scary descriptions about the government in the future and the dystopian society. 1984, written in 1949, was intended to be a portrayal of the future and V for Vendetta, made in 2005, shows Britain in power in 2038. Both of these pieces of literature were not far off from their description. As every single year passes by, our own society starts to reflect images from these books.

When the government has this much power over the people, the people rebel, but can they be a success or not? 1984, written by George Orwell, illustrates a perfect example of a dystopian government. The setting is in Oceania, Britain. The government is full of spies and secret police that carefully watch the common people for any mistake they might make that can harm the government in any way. As shown with Winston Smith, the protagonist of the novel and many other citizens in Oceania, the government manipulates these characters into their pawns.

All the records of the past have been omitted and destroyed and created all over again to fit the government’s beliefs and to show that the government is always right. Big Brother has its own secret police, the Thought Police the themes were similar but there were many differences as well. for example, the resistance in 1984 was subtle if it existed at all while the resistance in v for vendetta was violent and actively opposing the government through force.

1984 and V for Vendetta Comparing and Contrasting. (2017, Feb 22). Retrieved from https://studymoose.com/1984-and-v-for-vendetta-comparing-and-contrasting-essay 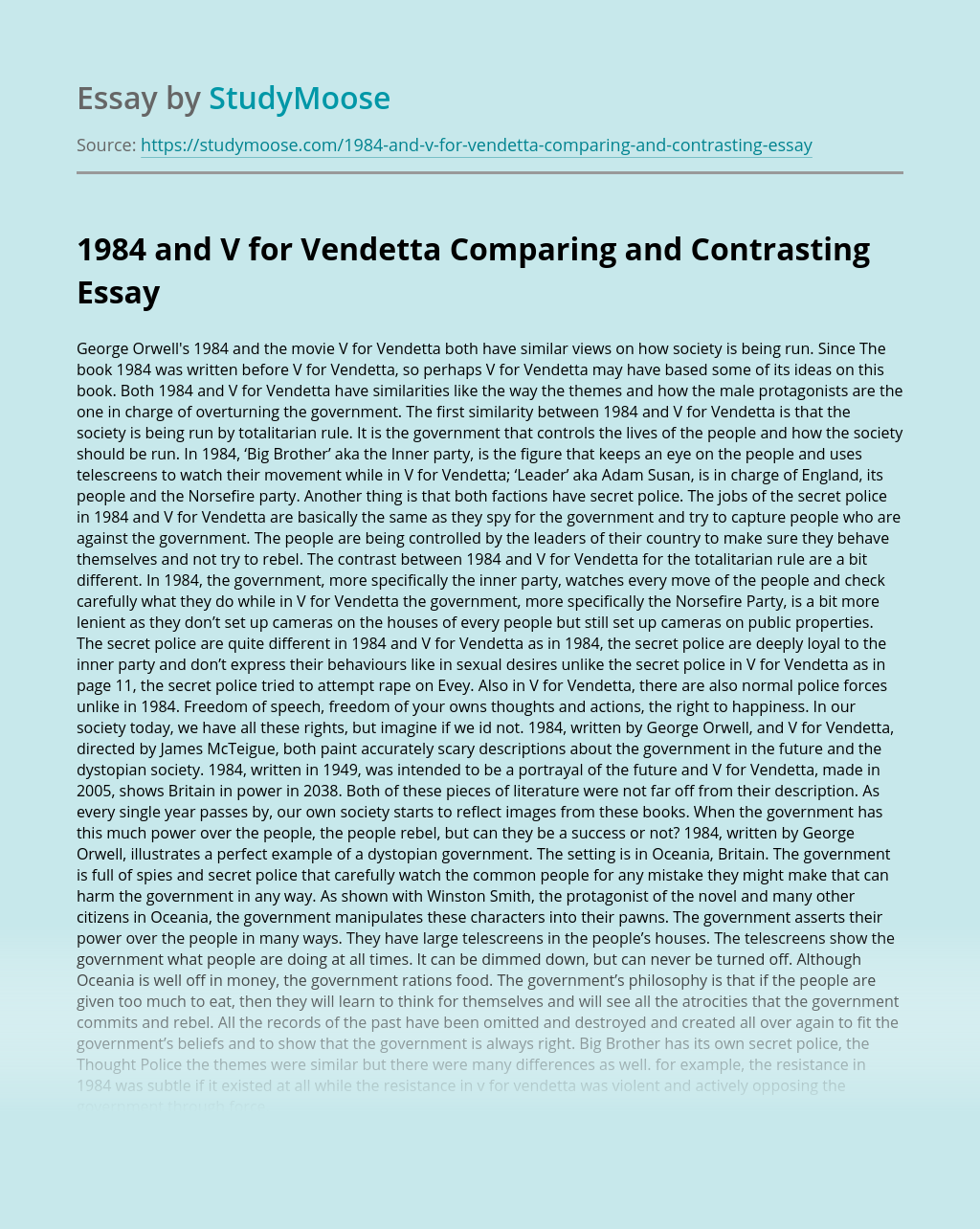 Turn in your highest-quality paper
Get a qualified writer to help you with
“ 1984 and V for Vendetta Comparing and Contrasting ”
Get high-quality paper
Helping students since 2015
Stay Safe, Stay Original