For many decades, there were numerous arguments stating whether the “Roaring 20s” were good times or bad times in Canadian history. Although there were many clear reasons that supported both sides of the argument, I believe that the 1920s were good times. The “Roaring 20s” were times of economic and social boom. New inventions which are still effective part of our lives in 21st century, growing power of multimedia and entertainment, and modern form of industrial revolution with mass production all originated from 1920s.

Don't use plagiarized sources. Get your custom essay on
“ 1920s Good Times or Bad Times ”
Get custom paper
NEW! smart matching with writer

Moreover, the entrepreneurs and industrializing businesses especially in the central Canada or in the cities were successful. Lastly, stock market was rising gradually until the very late 1920s, until it collapsed. The 1920s were surely the golden era of Canadian history. First of all, great inventions and discoveries were made during 1920s. These fascinating discoveries and inventions had made significant impacts and brought changes in people’s everyday lives. Some of the essential items that we use every day were inventions made in the 1920s, such as vacuums and dishwashers.

The three major discoveries and inventions that I believe were the greatest out of all which still are being used today are insulin, private automobiles, and radio. Insulin was the first effective medical treatment towards diabetes. Diabetes was one of the major diseases that had killed many people around the world during 1920s. Proper and effective treatments towards diabetes were needed as soon as possible. In 1921 at University of Toronto’s labratory, Dr. Fredrick Banting with help of his co-leagues and students succeeded isolating insulin which is a hormone from the dog.

Banting’s idea was to inject the isolated insulin to the patient’s body since the reason diabetes is being caused is because of the scarcity of the insulin in one’s body. The results of insulin were astonishing! Banting and his colleagues had successfully created new treatment for diabetes. Fredrick Banting was therefore rewarded with highest praise, the Nobel Prize in physiology, and became the first Canadian to ever receive the Nobel Prize in physiology. Insulin is still the best medicine available towards diabetes in modern days.

The cars, highways, traffic lights, and so on that we see every day had originated from the 1920s. The invention of the radio was fascinating. It allowed people to connect with the world even in remote regions, allowed important messages to be set out to big population in short amount of time, and lastly made the gap between the cities and the countryside smaller. Radio was the tool that allowed people in remote regions, such as farmers to be connected to the world, issues, and so on. It has helped many Canadians to be less isolated and lonely.

Radio also marked the beginning of the mass media revolution. It was the radio which influenced televisions, computers, and phones, and so on to be created. All of these great discoveries and inventions I have mentioned were created in 1920s, and they are still very effective part of our lives in modern days. 1920s surely was a very productive decade and was essential towards the development of the World including Canada. The 1920s were the starting point of the Mass Media Revolution. Mass media brought fashion trends, music, games, etc. along with them.

Canadians were still in despair and in depression during the 1910s after WWI. Canadians faced high unemployment rates as many soldiers came back from the war, and they were also faced with the sorrow due the loss of the loved ones through the war. It was the mass media and the entertainment which helped Canada to forget about the hard times and to recover. Multimedia such as live broadcasts from new invention “radio” fascinated the Canadians. They could tune in to different channels in order to listen to many different types of programs.

They could hear the music, live broadcast of the hockey game, live entertainment session with the comedian, and so on. The farmers in remote regions in prairies could even hear the live broadcast of the Maple Leaf’s match! Radio therefore has contributed a lot towards the society such as connecting the nation together, sending out information, entertainment, and so on. Secondly, the new fast pace and grooves of the jazz music and new trends of dances were appealing towards the younger generations, and were very popular.

These types of music could also have been easily accessed through the multimedia such as radio. Thirdly, the younger generations were also fascinated by the new fashion trends from New York, and other regions in United States. Woman who were extremely in to these fashion trends were called flappers. They have cut their hair short, rolled down their silk stockings, rose the hem- lines, and so on. Flappers believed in the unique characteristics of them and admired the new fashion trends. Lastly, new games such as Mah-Jong from China, and Crossword puzzles from U. S. ere also very popular since they could be easily played by anyone. Without these entertainments and power of multimedia, the variety of multimedia we see everyday perhaps might not have existed. Moreover, these entertainments, and new trends has helped Canada get over the hardships of the post war economy and its effects. Entertainments and multimedia played big role in encouraging the people, which helped the economy to boom. During the 1920s, the modern industrial revolution began. The idea of mass production was made possible due to the new assembly line system.

Industrial revolution affected almost every aspect of people’s lives in 1920s. Private automobiles like model Ts were made on assembly lines at Ford Factories. The stock market of the industries has boomed and reached the highest points. The prices of the stocks during 1920s were considered impossible just a decade before, which proves how high the quality of the economy in Canada would have been during the 1920s. Canada’s economy has increased significantly and great parts of the central Canada had developed gradually in 1920s as well.

It was said to be the golden years for the people in the cities, especially to the entrepreneurs and business men. As more money was gained, more money was spent and the development and enhancements were possible. This is how Canada has developed so much in 1920s, despite the depressing years they had faced earlier, which were 1910s due to the World War I. It was true that not everyone was happy during 1920s. Almost every farmer in remote regions has suffered greatly during the 1920s.

The grain prices has dropped 50% after the WWI, and the new laws made by the government such as tariffs were only focused towards the workers in the cities, therefore farmers faced economical hardship. However I still believe that the 1920s were golden years to Canada. First of all, the majority of the Canadians were living in major cities, and was involved with the major industrializing economy and services. The farmers in Canada were the minority group. Therefore I believe that it was fair for government to set their focus on majority and support them as much as they could since the majorities were growing with gradual speed.

Secondly, the farmers had their golden years during the 1910s, for example, the productivity of the grain industry, fishery, and forestry has grown almost twice in sizes and the prices of these products has also greatly increased during 1910s, or WWI. This decade was also a devastating decade towards the industrial economy due to the WWI. Therefore, I believe that the farmers should be able to accept the fact that it was the other part of the economy’s turn to grow. Lastly, some good came out towards the farmers during 1920s as well.

Although farmers were facing hardship, they still appreciated the new inventions, such as radio and private automobiles because they were very helpful. These inventions allowed farmers in remote regions to be connected with the world. All the new forms of entertainments were also appealing to farmers as well, such as Jazz music, talkies which were talking movies, and so on. Therefore I believe that the 1920s weren’t so bad for farmers as well since they have gained a lot during 1910s, and farmers also were influenced positively with the new inventions, trends and entertainments.

The “Roaring 20s” were golden times, especially when compared with the war times during 1910s, and the great depression, “Dirty Thirties” which the Canadians would soon face. The new fascinating and significant discoveries and inventions, multimedia revolution, new forms of entertainment, and lastly gradual increase in the industrialization economy and services made the 1920s to be successful. Although some visible minorities has faced hardship, it was their sacrifice which made the boom of the economy possible.

It was reasonable for the government to support the majority if they had to choose only one group to set their focus in order to develop the country’s economy. I believe that 1920s were a lot more than just a golden era. I believe that 1920s were the cornerstone of the revolutionary development which has helped us reach the society which we currently live in. We should never forget about the efforts and sacrifices that people had contributed for us, and we should also contribute with our best effort to create better society for our future generations. 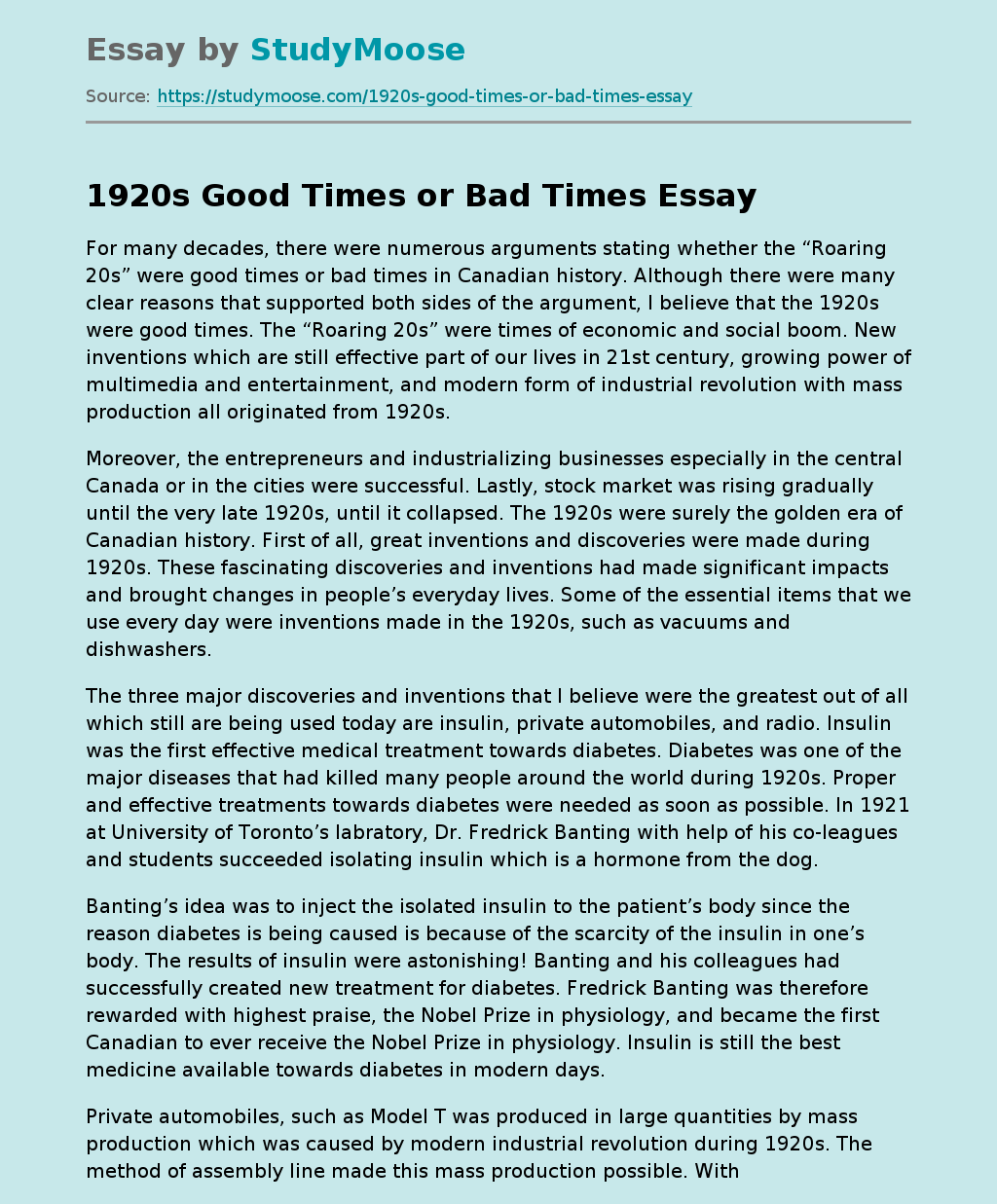