In Greek mythology, there were 12 Olympians, gods and goddesses, who lived on Mount Olympus which is the highest mountain in Greece. The leader of the Olympian gods was Zeus. The gods were born and grew just like human beings, some of them even married, however they were un-aging and death never came to them. They had passions and human weaknesses and were many times at fault, but were then obliged to take the full responsibility of their actions. The Olympian gods were the main gods of Ancient Greece.

Don't use plagiarized sources. Get your custom essay on
“ 12 Olympians of Greek mythology ”
Get custom paper
NEW! smart matching with writer

APOLLO is the god of music, poetry, prophecy, light, plague, and healing; later, the sun ARES is the god of war and one of the great Olympian gods of the Greeks. He is represented as the son of Zeus and Hera.

DIONYSOS is the god of wine, intoxication, madness, inspiration and prophecy, theater, and revelry. HERMES is the god of eloquence, commerce, cunning, the inventor of the alphabet, numbers, astronomy, music, the art of fighting, gymnastics, the cultivation of the olive tree, measures, weights, and more, he sends refreshing sleep, conducts dreams, is the herdsman of the dead, the protector of travelers, the giver of wealth and luck, the protector of sacrificial animals, and patron of gymnastic games, among other things.

HEPHAISTOS was the great Olympian god of fire, metalworking, stonemasonry and the art of sculpture. POSEIDON is the god of the sea.

He could create storms and earthquakes. He created the horse and taught mankind to use horses. ZEUS is the great King of the Gods, ruler of Olympus and the Heavens, and leader of the Twelve.

He was the god of the sky, weather, kings, fate, law and order. APHRODITE is the great Olympian goddess of beauty, love, pleasure and and procreation. ATHENA is a goddess of wisdom and crafts, war and strategy, and inventions in science, industry, art, and agriculture. She is best known as the olive-giving patron of her namesake Athens.

ARTEMIS is a goddess of the hunt, wild animals, childbirth, healing and plague, and later, the moon. DEMETER is the goddess of fertility, grain, and agriculture. She presided over the Eleusinian mysteries, and was associated with law and order. HERA is the Olympian queen of the gods and the goddess of women and marriage. She was also a goddess of the sky and starry heavens. 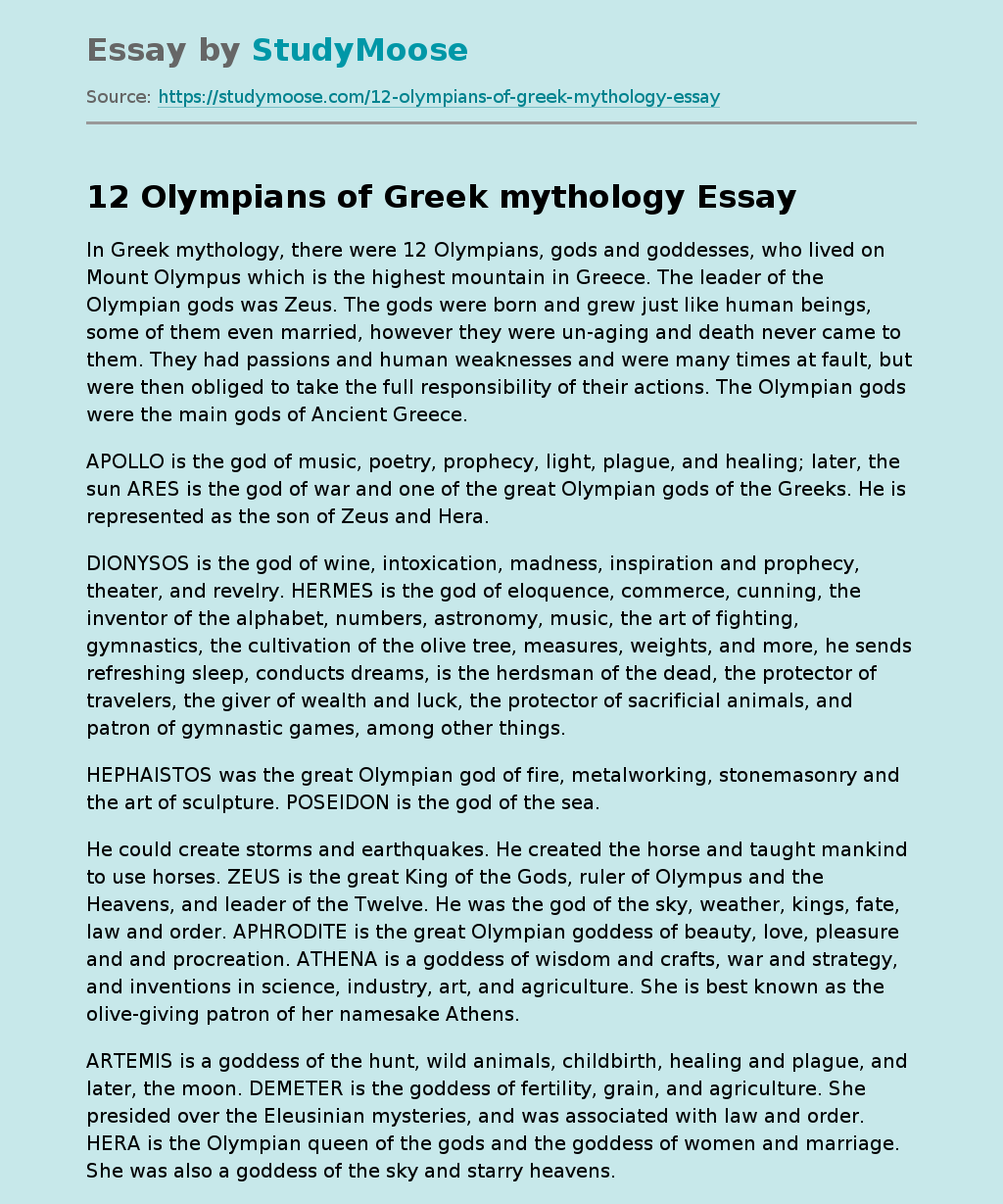