The character in this movie that was the most effective critical thinker was juror 8 (Henry Fonda). The types of characteristics that Fonda, exemplify is provisionalism, creativity, and critical thinking. By doing this he is uncover new ways of interpreting evidence, turns to certainty and shortsightedness when arriving at conclusions. For example, Fonda commented on how the boy had been slapped around all his life and was treated poorly. This kind of thinking leads to more external attributions—it was the way the boy was treated in life, not something inherent about the boy or his character.

Next Fonda asks the jurors to consider the larger picture: the defendant’s background, the witnesses’ credibility, and the defending attorney’s motives. He then shakes up the room by presenting a knife identical to the murder weapon–a weapon that the jurors were certain was unique. At this point, he has them wavering about reasonable doubt. Fonda was clearly self-confident. He had complete conviction in what he was doing and saying which instilled confidence in other members of the jury who were leaning in that direction a guilty verdict.

The character that is the least effective critical thinker is juror 3 (Lee J. Cobb). Cobb made more internal attributions for the boy’s behavior. He agreed with the slum kid idea, but also focused on the notion that kids today don’t have any respect or sense of morality. He is basing this decision on his own life situation because of his poor relationship with his son.

Cobb categorizes the defendant as a rebellious kid and wants to persecute him. Another example is when Henry Fonda insulted Lee Cobb by calling him a sadist and that due to his own beliefs.

Cobb got mad and said: “I’m gonna kill ya.” Thus, when Cobb said it, it was just the situation that provoked this expression, but when the boy said it, it was an indication of his murderous rage. So this is an example of Cobb is view as bias. The other jurors are shocked that he seems to have forgotten the sure and certain facts of the case that prove the defendant’s guilt. Now these are facts, you can’t refute facts as stated by Cobb. The barriers that prevented three other jurors were racist, baseball fan, advertisement. Ed Begley was racist this become a barrier when thinking ritically because he is so ingrained in the way of his life. He is not simply accepting information at face value in a non-critical or non-evaluating way. He feel that because the boy as a slum kid this is stereotypes which lead to a biased way of interpreting the evidence. He relayed the idea that there’s something about slum kids who belong to certain ethnic groups that makes them inherently rotten. These are internal attributions which lead to more of a guilty verdict. Jack Ward barrier was that he wants to conform with the majority in order to quickly end the deliberations so he can attend a ballgame.

He was selfish and inconsiderate that another person life was at stack. He also stated the he had enough of all the talking and wasn’t going to say nothing. But when was asked why he could not response why. Webber was continually strays off course with advertising stories and slogans. His job was getting in the way of his decision. Not staying focus on what is going on can lead to the wrong decision. Towards the middle of the movie Sweeny, Marshall, and Voskovec all become critical thinkers. Sweeny initially conformed in the public vote, but switched when it was private—suggesting that he went along with the crowd.

But then later he remembers information that the eye witness stated. Sweeny did not accuse either of the eye witnesses of lying but question the information. He said that these people believed they saw the boy commit the crime. In other words, they somehow misremembered what they saw and heard. Thus, they probably witnessed an ambiguous event and filled in the missing information with details that were prescribed by their own stereotypes of slum kids. In addition, the police officers and lawyers who interviewed the witnesses may have planted false memories in them by asking leading questions.

In either case, these people probably believed that they saw the boy at the scene of the crime—but this was probably due to the misinformation effect. With Marshall at first he refuses to budge until he is presented with sound reasons for changing his mind. He went by the boys alibi was that he was at the movies when the murder took place. Marshall said that because the boy couldn’t remember the names of the films and who played in them when he was interviewed by the police then he obviously was lying but he remembers that the boy was under conditions of high emotional stress.

Thus Marshall failed to consider how the stress of the situation could have affected the boy—and just made an internal attribution that he is a liar. However, when Marshall was asked to remember the films he saw last weekend, he couldn’t fully remember them—even without emotional stress. Marshall also eventually changed his vote based on informational influence. He was convinced that the female eye witness had poor eyesight and therefore couldn’t make a positive identification. This was less of a superficial change.

Voskovec became a critical thinker because throughout the trail he took down information that he felt was important. Then when it was time to deliberate him then took down more information that each juror had to say. By this his was gathering important information to base his decision on whether the boy is guilty or not. The four types of logical fallacies that are present in the jurors thinking process are flaws in thinking, illogical sequences of thought, stereotyping, obfuscation, and other typical critical thinking errors displayed in the movie as the characters move through the stages of critical thinking development.

Fonda and Cobb revealed an emotional argument: The whole debate in which one character called the other a “sadist”. A scuffle occurred afterward. Ed Begley revealed unqualified generalization: he was a racist who hated slum-kid such as the defendant. He went on a rant in which he claimed “not a one of them are any good”. Sweeny showed false analogy: When he mentions how the one of the witnesses in the trial just made a up a story to get attention. The character said that he knew because he would have done the same thing, were he as lonely as the witness. 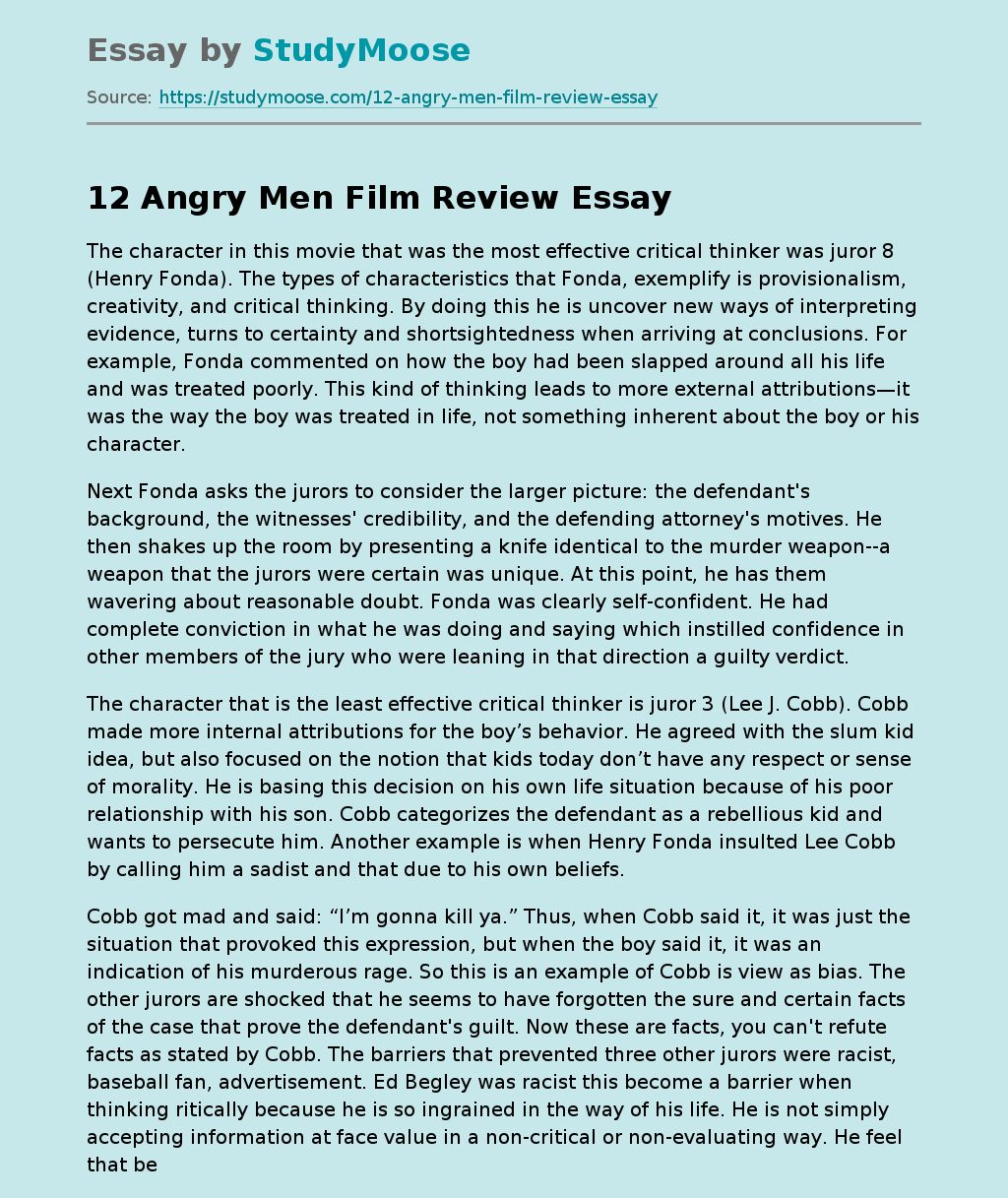